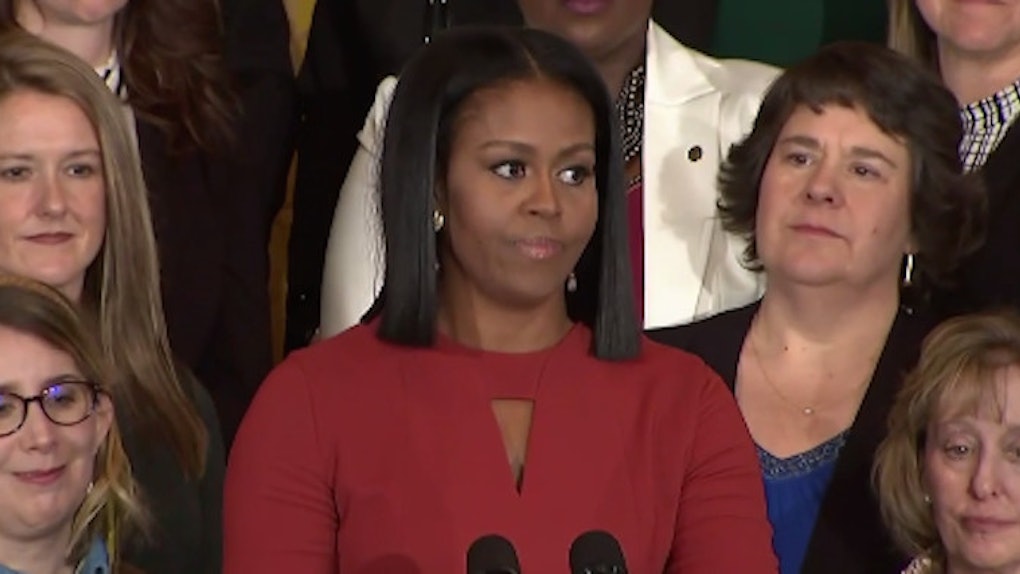 Michelle Obama delivered her final speech as first lady of the United States.

The address was for the 2017 School Counselor of the Year event at the White House. This is especially fitting as Obama has supported education throughout her stay in the White House.

It was an incredibly emotional event that ended with seemingly the entire East Room -- Obama included -- in tears.

We made in this administration the largest investment in higher education since the GI Bill.

Then she really got into the emotional thrust of her address.

Obama spoke about what school counselors and other educators do, saying,

Counselors come in early, stay late and reach into their own pockets to stick with students in their darkest moments, Obama said.

In doing this, she said, students are made to feel empowered and "know that this country belongs to you."

Obama told the audience she couldn't think of a better message to send in her final address as first lady.

If you or your parents are immigrants, know that you are part of a proud American tradition. The infusion of new cultures, talents and ideas, generation after generation, that has made us the greatest country on Earth.

Obama explained being a religious person -- no matter what your religion -- is also part of a great American tradition and is embedded in the founding of this country.

Do not ever let anyone make you feel like you don't matter or like you don't have a place in our American story, because you do. And you have a right to be exactly who you are. But I also want to be very clear: This right isn't just handed to you. No, this right has to be earned every single day. You cannot take your freedoms for granted.

Obama urged young people to serve and protect their freedoms, namely by getting a great education and preparing themselves to join the national conversation with critical thinking.

When you are struggling and you start thinking about giving up, I want you to remember something that my husband and I have talked about since we first started this journey: [...] the power of hope. The belief that something better is always possible if you're willing to work for it and fight for it.

She mentioned her father getting up every day to go to his job, which was a central part in her speech at the 2008 Democratic National Convention.

That's the kind of hope that every single one of us -- politicians, parents, preachers, all of us -- need to be providing for our young people. Because that is what moves our country forward every single day, our hope for the future and the hard work hope inspires.

Obama was holding back tears throughout this part of the address. The counselors behind her were doing the same, and many broke down in tears by the end of the speech.

She held back tears as the room stood to applaud her.

I want our young people to know that they matter, that they belong. So don't be afraid. You hear me, young people? Don't be afraid. Be focused, be determined, be hopeful, be empowered, empower yourself with a good education, then get out there and use that education to build a country worthy of your boundless promise. Lead by example with hope, never fear. And know that I will be with you, rooting for you and working to support you for the rest of my life.

She ended her speech with her voice cracking, thanking the counselors for the work they do.

Being your first lady has been the greatest honor of my life, and I hope I've made you proud.

As the room applauded, she turned away from the microphone, seemingly with relief for having made it through the speech without totally breaking down in tears.

The rest of the room did not have quite as much strength as she did.