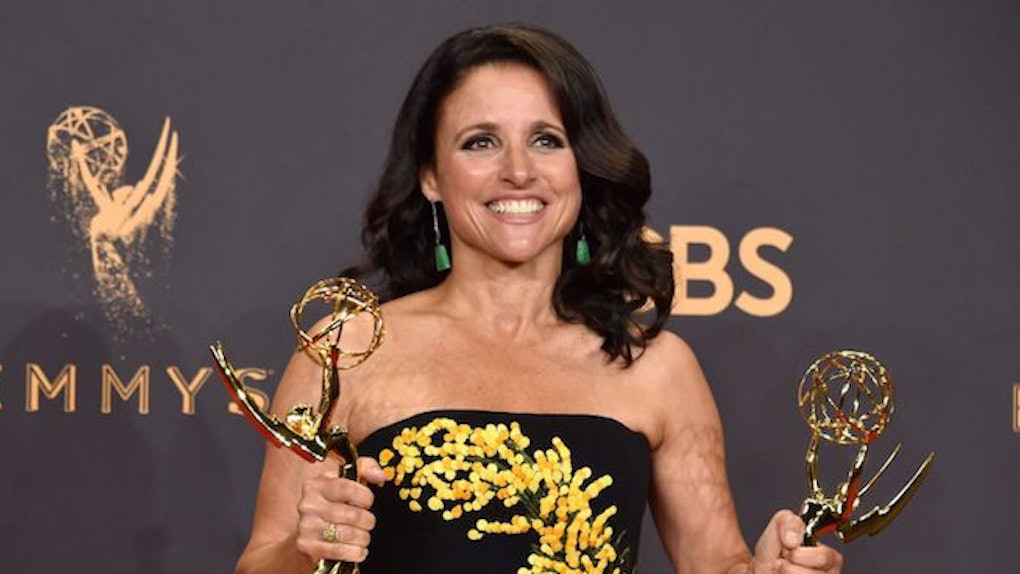 On Thursday, Sept. 28, Veep star Julia Louis-Dreyfus announced she has cancer with a statement posted to Twitter. The actress wrote in the statement, which she also signed, that "1 in 8 women get breast cancer. Today, I'm the one." The statement was posted just after 1 p.m. ET.

She added in her statement that there is "good news" about the diagnosis, saying,

The good news is that I have the most glorious group of supportive and caring family and friends, and fantastic insurance through my union.

Then, her statement took on a more political theme as Louis-Dreyfus explained the "bad news" about her breast cancer announcement. She wrote,

The bad news is that not all women are so lucky, so let's fight all cancers and make universal health care a reality.

Louis-Dreyfus' news comes as Congress continues to battle it out over a health care policy. Republicans have been attempting to make good on their goal to repeal and replace the Affordable Care Act (ACA, aka Obamacare) since the spring. Thus far, their attempts have been major fails. The latest attempt was made in the Senate over the past two weeks with the Graham-Cassidy Amendment. That amendment is heading towards failure as Senators Susan Collins, John McCain, and Rand Paul have said they would vote against it. With that, it does not have enough votes to pass.

The Senate has until Sept. 30 to vote on a health care plan with a simple majority. After Sept. 30, they'd need over 60 votes to pass a bill. Since Republicans can't even drum up 51 votes this time around, it does not look like their attempts to repeal and replace Obamacare will be succeeding any time soon.

Meanwhile, many Democrats have recently been pushing for universal health care, which is what Louis-Dreyfus says she wants to be a reality. Most recently, a handful of Democratic senators, led by Bernie Sanders, have proposed and supported Medicare for All, a health care plan that would provide universal health care coverage (i.e. health care for everyone, automatically).

Many fans are applauding Louis-Dreyfus for making her cancer announcement be about more than just herself.

Louis-Dreyfus' cancer announcement comes just after she made history at the Emmy Awards on Sept. 17.

On that Sunday night, the actress won her sixth award in a row for Outstanding Lead Actress in a Comedy Series for her incredible portrayal of Selina Meyer on HBO's Veep. This win broke Candice Bergen's record of Emmy wins for the same category (Bergen won five awards for her portrayal of the titular character in Murphy Brown).

This was Louis-Dreyfus' eighth Emmy award in total, which ties Cloris Leachman's eight wins. Backstage at the awards, she said that these historic distinctions made her feel "numb." She said, according to Entertainment Weekly,

I'm just incredibly honored and amazed this has happened to me. It's all very baffling and a sh*t-ton of good luck.

Just as her Veep character is, obviously, political, Louis-Dreyfus has not backed away from talking about politics.

During the Screen Actors Guild Awards this past January, for instance, she took her time accepting her award for best actress in a comedy series to also take a shot at Trump, who had just been inaugurated as president -- and had just introduced a travel ban on immigrants from Muslim-majority countries. She explained that she is the daughter of an immigrant as her father fled religious persecution in France from the Nazis; she called Trump's travel ban "un-American."

And just to kick it all off, Louis-Dreyfus went on to just totally make fun of Trump for the inauguration crowd size scandal. Check it out:

Still, back in April, Louis-Dreyfus said that "not in a million years" would she consider running for office. But, clearly, that doesn't mean she's not using her voice. It's inspiring to see someone take such an emotional, personal moment and instead turn it to the people less privileged than her, pointing to a possible solution that could help millions of Americans. We wish her all the best with this breast cancer diagnosis.