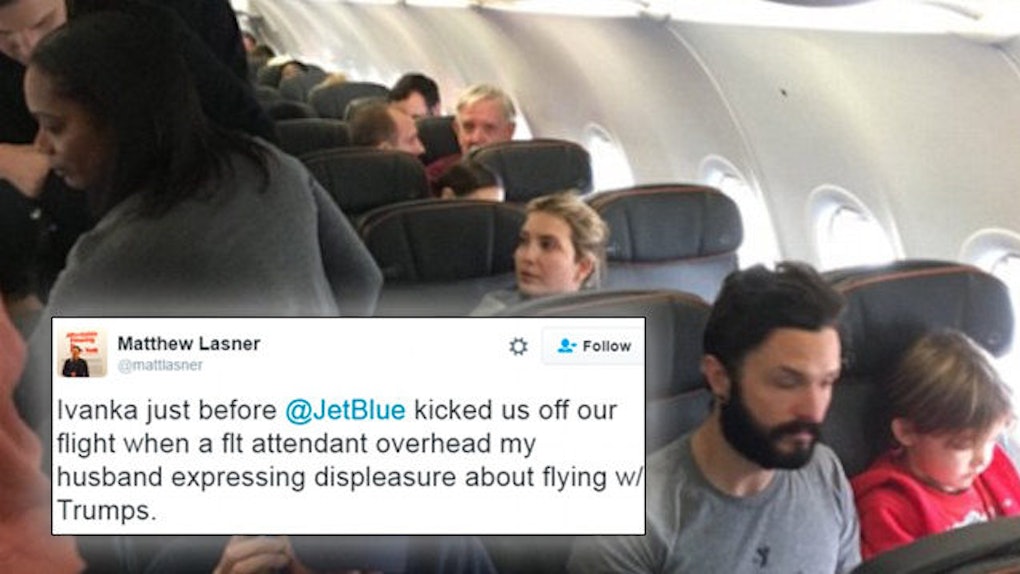 Ivanka Trump was yelled at on a JetBlue flight on Thursday morning.

A man, who had a child in his arms according to TMZ, screamed at her,

Your father is ruining the country.

Why is she on our flight? She should be flying private.

According to the Daily Mail, before he shouted, his husband, Matt Lasner, tweeted about about their encounter with Ivanka.

Ivanka and Jared on our flight. My husband expressed displeasure in a calm tone, JetBlue staff overheard, and they kicked us off the plane.

He also posted a photo of Ivanka on the flight, saying a flight attendant "overheard my husband expressing displeasure about flying w/ Trumps."

All of these tweets have since been deleted.

Ivanka tried to ignore the man as he expressed his displeasure. She tried to distract her children, who were with her on the flight, with crayons, one passenger told TMZ.

JetBlue confirmed in a statement a flight was delayed after customers had to be removed from a flight.

If the crew determines that a customer is causing conflict on the aircraft, the customer will be asked to deplane, especially if the crew feels the situations runs the risk of escalation during flight.

JetBlue flight 415 was supposed to leave from John F. Kennedy airport in New York to San Francisco. It was delayed by about an hour.

Ivanka and her family, including her cousins, were flying in the coach section on the JetBlue flight.

Ivanka and husband Jared Kushner have been intimately involved in Donald Trump's presidential transition, causing criticism about conflicts of interest.

She will be moving to Washington, D.C. for her father's presidency and is reportedly getting an office in the White House.

Many people have been boycotting her fashion brand and protesting her involvement in her father's upcoming presidency in various ways.