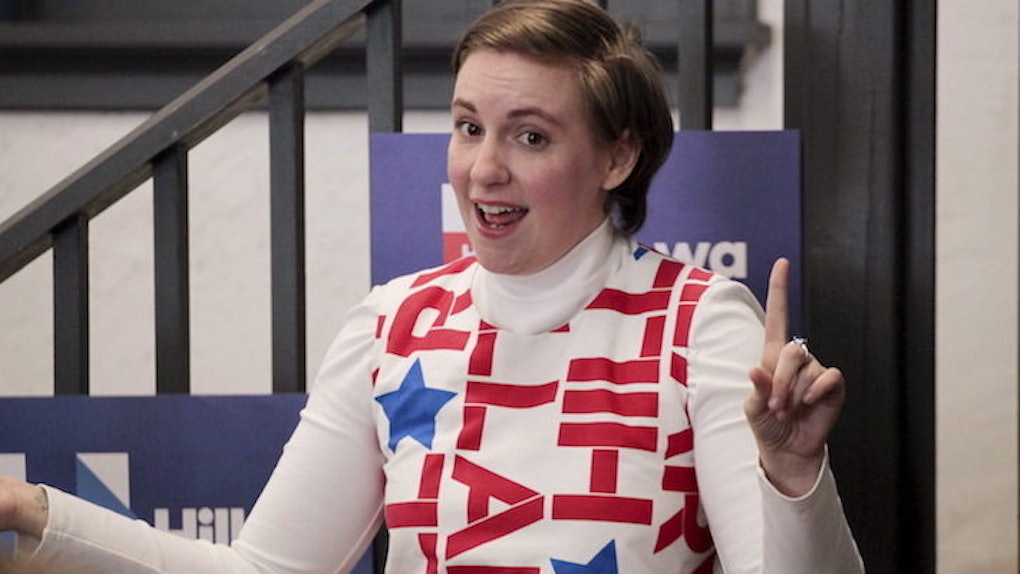 With the election of Donald Trump, there's been ample time for reflection. And boy, have we reflected. This race was especially hard for me as a die-hard Hillary Clinton supporter.

You heard right; I am one of the few die-hard Hillary Clinton people. I wasn't a Bernie person making my second choice. I've admired Hillary Clinton ever since I was a child. She came to my school in Brooklyn in 1999 when she was running for the Senate. I was in the chorus and we sang for her. She even knew the song!

Somewhere between my mind in my heart, I still hold out hope that maybe one day she could be our president. But on to our sharpening reality...

This race was about many things, including xenophobia, misogyny and bigotry. This race was also about class warfare. If liberals come away with anything from this loss, it needs to be this: We must stop letting the elite in our movement be the voice of our movement.

Lena Dunham, Robert De Niro and Miley Cyrus are just a few of the celebrities who have expressed their disappointment and fear over the election of Donald Trump.

Here's the thing: Dunham, De Niro and Cyrus have more money than God. They will be fine. When you're a certain amount of rich, the president tends to become irrelevant.

As Mitt Romney said during his first presidential debate with President Obama, “The rich are going to be fine no matter which one of us is president.”

You know who needs to be fearful of a Trump administration? People like me! People like us! People of color, women, mixed race, liberal and poor. The decisions President Trump makes or won't make will most likely affect me and my peers.

Does Lena Dunham have Obamacare? Probably not. I do; I work four part-time jobs, so my ability to get insurance through an employer is pretty much out of the question.

I know as women, Ms. Dunham and Cyrus are appalled about how the next president has spoken about women and his treatment of women. I am too. Such behavior is unbefitting of a human being -- let alone a president.

But let me get one thing straight: Lena Dunham will not have to worry about President Trump or any man's advances. She's rich; she can hire bodyguards. No one's grabbing her without permission.

You know who I feel bad for? Every woman who can't afford to hire bodyguards, who walk down the street every day, and are targeted by perverts who are emboldened by our new president. My mother cannot afford such protection, neither can my aunts, sister, cousins or female friends.

So that means it's up to us, the common folk, to go out there and tell of our heartbreak to make our own viral videos about how a Trump Administration can affect us. There are protests going on nationwide, and that's a start, but we need to do more.

I'm sure the same goes for the people in the Midwest who voted for Mr. Trump. We need to be better at putting real folks with real problems out there in the forefront. Those need to be our celebrities. We need to make them famous.

We need to be better at putting real folks with real problems out there in the forefront.

Now am I saying that celebrities should be denied a voice? No, of course not, but let's keep it proportional. We found out the hard way that campaigning with LeBron James in Ohio and having a concert with Jennifer Lopez and Marc Anthony in Florida did no bit of good.

I could just imagine an undecided, unemployed voter in Wisconsin or Michigan the week before the election deciding who to vote for, and seeing Hillary Clinton on stage with a plethora of celebrities in states thousands of miles away. Then they look to Donald Trump in their own state talking about bringing back jobs to those communities.

People saw Donald Trump in their states, talking about bringing back jobs to Americans.

At that point, can you blame them? And yes, I know there's more than class warfare going on. Like I said before, there's race and bigotry but unfortunately, there's very little we can do about that.

If a person voted for Donald Trump because they're against certain races, that's most likely a vote we can never get. But if a person truly voted for Trump because they want their local factory to be a place they can work at from high school to retirement, then we have a chance of getting them back.

Democrats need to have a broader appeal.

We just need to have a broader appeal. The most elite and well-off of our party cannot continue to be the voice of our party.

A billionaire who was given the money to start his empire went into the Midwest and convinced people that he understood the plight of the poor and working man. And it worked! The fact that Donald Trump could go in there and tell that story shows that there is a flaw in liberal outreach.

One of the most underrated political movies, "The American President," puts it best:

“People want leadership. And in the absence of genuine leadership, they will listen to anyone who steps up to the microphone. They want leadership; they're so thirsty for it, they'll crawl through the desert toward a mirage, and when they discover there's no water, they'll drink the sand.”

We cannot allow our fellow citizens to eat sand again. I don't know who this person is, but we need to find them -- and quick. The last three presidents have been two-term presidents. If we don't get our act together soon, the dreaded four years of Trump can easily turn into eight.