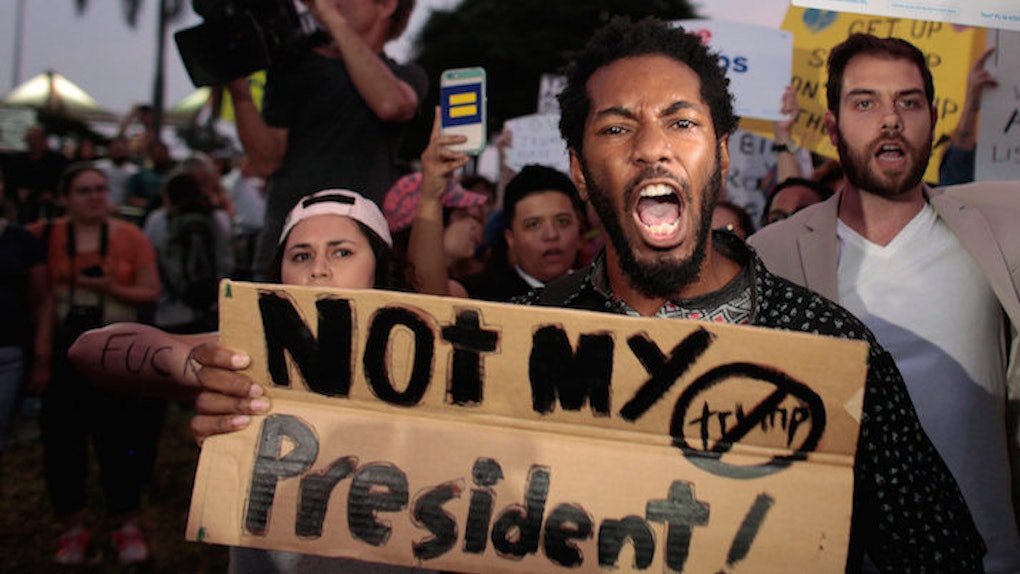 There have been widespread protests against Donald Trump across the US since he became president-elect.

Almost immediately, people began to label the protesters as sore losers who are wasting their time.

But in spite of what individuals like Tomi Lahren might argue, the protesters do have valid grievances.

The Trump protests send a powerful message to the Electoral College, and say a lot about our democracy.

Hillary Clinton won the popular vote by a significant margin.

While it's extremely unlikely, there is still a chance she could win via the Electoral College. These protests could signify to the electors it's in the national interest to elect Clinton.

The Electoral College was designed to ensure the US elects a qualified leader. Trump – who has never held elected office, served in the military or performed any prolonged public service – is arguably extremely unqualified.

That's a large part of what these protests are about.

Stop saying protests don't have an impact: The founding of America was an act of protest.

When people chant "Not my president" in relation to Trump, they are not necessarily protesting the outcome of the election. Instead, they're protesting what Trump represents.

Simply put, these protests are about letting the president-elect know he will get no rest if he follows through with many of his plans.

It's true we have checks and balances, and that many of his proposals are so vague and extreme, it's hard to believe any of them would actually be implemented.

But there's too much at stake to just sit, wait and hope none of it will happen.

Protesting – and resisting – is the most American thing you can do.

This country was founded as an act of resistance against tyranny.

Our Declaration of Independence was an act of protest against the tyrannical policies of the most powerful empire in the world at the time.

Women gained the right to vote because they resisted, marched and shouted at the top of their lungs.

America is also not unique in terms of protests being vital to the democratic process.

Earlier this year, protesters in Iceland – a country with a population of roughly 323,000 – demanded their prime minister resign after the Panama Papers revealed his shady business dealings. He listened, and stepped down.

If a country that small can take to the streets and instantly change its government, imagine what a country like the US – with a population of 324 million – can accomplish.

In other words, stop telling protesters they're wasting their time. They're out there because they love their country.

Trump lost the popular vote, and he needs to listen to those who voted against him.

Some people understandably want the country to come together, move forward and end the divisiveness that characterized the election cycle.

But it's very hard for people to unify behind a man like Donald Trump, especially since he's just spent over a year preaching division.

These protests aren't just about the outcome of the election; they're about the values millions of Americans hold dear.

This is about taking a stand against Trump's xenophobic, sexist and racist rhetoric. People are not comfortable with a man who wants to separate America from its neighbor with a wall, or tear families apart by deporting millions of people.

They're not OK with a president who has expressed a lack of concern over nuclear proliferation, and who has said he wants to bring back torture and kill the families of terrorists.

Protesters are terrified Trump has selected Mike Pence – a man who stands against same-sex marriage and reproductive rights – to be his vice president.

Also, Trump once suggested women who have abortions should be punished.

Many are justifiably frightened Trump chose Stephen Bannon – a man with a documented history of antisemitism and xenophobia – as his chief strategist and senior advisor in the White House.

People are furious that 2016 will be the hottest year on record, but Trump picked a climate change denier to lead his EPA transition team.

It's also quite unsettling that Trump is vetting Ben Carson – a man who believes in creationism and thinks the pyramids were used for grain storage – to be Secretary of Education.

People are also scared about the rise in hate crimes in the wake of the election.

So, no. This isn't a matter of being sore losers. This is about the future of the country and the planet.

Asking people to "wait and see" what Trump will do is asking them to normalize his dangerous behavior, rhetoric and policy plans.

Many are arguing the protesters need to "wait" and "give Trump a chance."

Asking for people to do this is no different than asking them to normalize hatred.

We must always take sides... Sometimes, we must interfere.

Trump has targeted millions of people with his policy proposals, and waiting around for him to follow through is not a valid option.

To borrow from Holocaust survivor and Nobel Laureate Elie Wiesel,

We must always take sides. Neutrality helps the oppressor, never the victim. Silence encourages the tormentor, never the tormented. Sometimes, we must interfere. When human lives are endangered, when human dignity is in jeopardy, national borders and sensitivities become irrelevant. Wherever men or women are persecuted because of their race, religion or political views, that place must — at that moment — become the center of the universe.

This is not a time for diplomacy or unity. This is a time to let Trump know his proposed policies do not sit well with millions of Americans... many of whom voted for the candidate who beat him in the popular vote.

As Senator Bernie Sanders wrote in a recent op-ed for The New York Times,

Having lost the nationwide popular vote... [Trump] would do well to heed the views of progressives.

The Constitution protects freedom of speech and the right to peacefully assemble. Donald Trump would do well to remember this if he truly plans to be a president for "all Americans," as he promised.

If the protests turn violent, then people have taken things too far.

But peaceful protests are – and always have been – fundamental to the progress of this country.