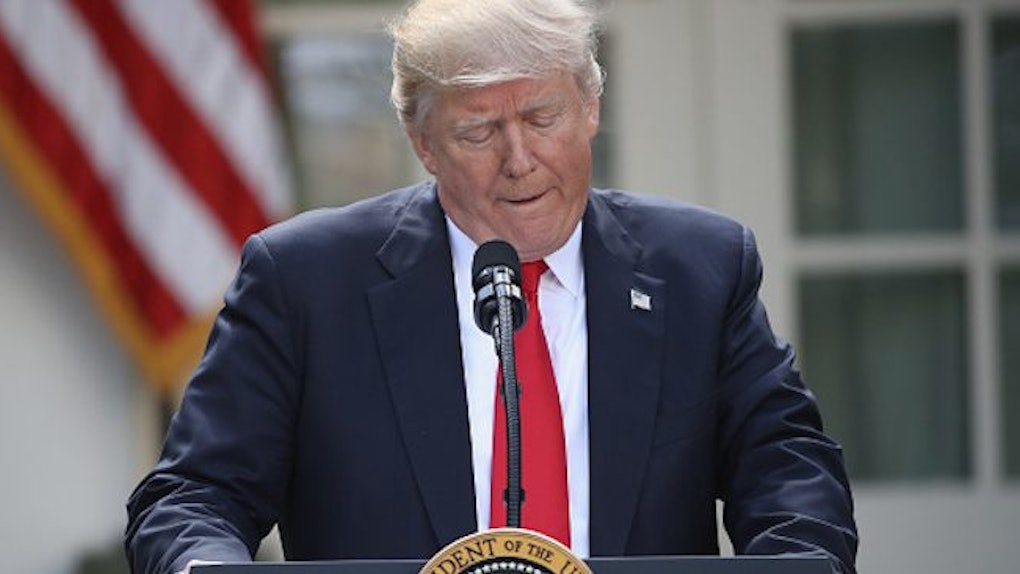 President Donald Trump isn't moving forward with plans to visit Britain until everyone is on the same page.

According to The Guardian, Trump told Prime Minister Theresa May during a phone call that he does not want to go ahead with a trip unless the public supports his visit, as he does not wish to travel amid "large-scale protests."

Based on the president's recent interaction with the UK, it might be quite a while before everyone sees eye-to-eye.

In the wake of the terror attacks on London Bridge and Borough Market, the president took to Twitter to encourage the United States to support his travel ban (which originally wasn't a travel ban, but is now, in fact, a travel ban).

Following this tweet, Trump then said the United States will stand united with the UK during this difficult time. However, many people criticized the president for having pushed his agenda before showing support for America's greatest ally.

But the Twitter chaos didn't stop there, as Trump's tweet about London Mayor Sadiq Khan garnered quite a bit of attention. Trump inaccurately wrote,

In the mayor's statement to Londoners, he said, “My message to Londoners and visitors to our great city is to be calm and vigilant today.”

According to The Guardian, a spokesman for Sadiq Khan said the mayor had “more important things to do than respond to Donald Trump's ill-informed tweet that deliberately takes out of context his remarks.” The paper further claimed that Khan called on the UK government to cancel Trump's invitation.

Between these controversial tweets and Trump's decision to pull out of the Paris climate agreement, many are OK with postponing the president's visit. Labour Party leader Jermy Corbyn tweeted that Trump's cancellation was "welcome."

Prime Minister Theresa May invited Trump to the UK — on behalf of Queen Elizabeth — after May was the first foreign leader to visit Trump after his inauguration. Time will tell when the trip will take place.