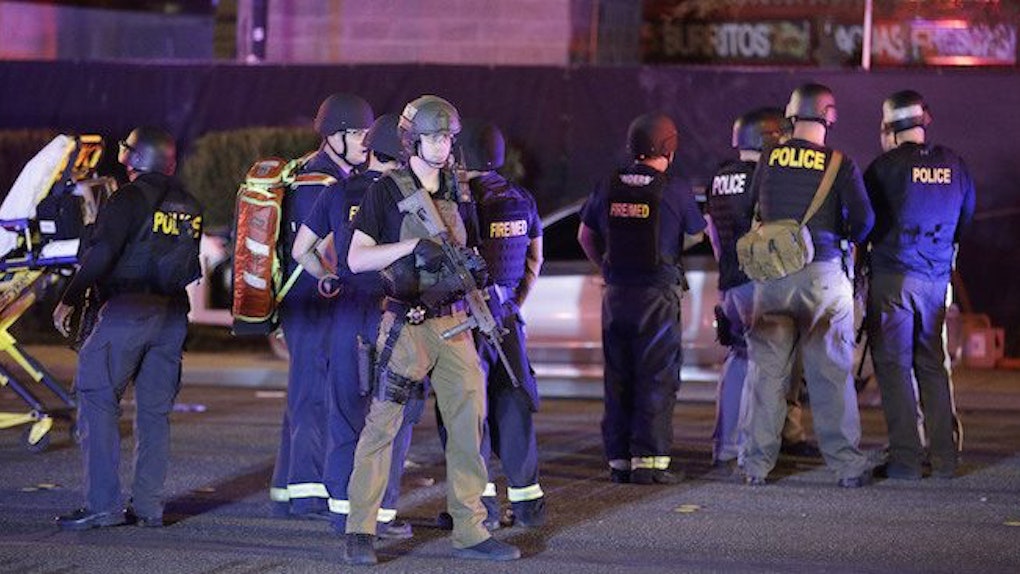 In what is being considered the worst mass shooting in modern American history, a gunman opened fire at an outdoor country music festival at Mandalay Bay Resort and Casino in Las Vegas, Nevada on Oct. 1, killing 50 and leaving more than 400 wounded. The entire nation is in mourning after the senseless tragedy, and people are taking to social media to express their condolences. Tweets about the Las Vegas shooting prove that the country is completely in shock at the magnitude of this horrific event.

EARLIER: Singer Jason Aldean had taken the stage at the Route 91 Harvest Festival when the shooting began around 10 p.m. PT. The gunman opened fire at the outdoor event from the 32nd floor of the Mandalay Bay Hotel, according to NBC News. Concertgoer Meghan Kearney spoke to MSNBC about the tragedy and how it unfolded. She told MSNBC,

Aldean posted a response to the shooting on Instagram on Monday morning, Oct. 2. He wrote,

People followed suit with their own condolences on social media.

Some called for changes to our laws.

Law enforcement identified the attacker — who was fatally shot — as a Nevada local, and they discovered weapons in his room on the 32nd floor of Mandalay Bay. The event is not believed to be connected to terrorism, according to NBC News. “We have no idea what his belief system was,” Clark County Sheriff Joseph Lombardo said. “We've located numerous firearms within the room that he occupied.”

Footage from the event is truly frightening. A video shows the sound of automatic gunfire during the concert, followed by concertgoers trying to take cover and warning other people to get down. There appeared to be at least three bursts of gunfire, per The New York Times. SWAT teams immediately headed to Mandalay Bay after reports about the attack emerged. Festival goer Rachel De Kerf told CNN she believed the gunshots lasted for 10 to 15 minutes. Monique Dumas, De Kerf's sister, recounted the events to CNN, saying,

Following the attacks, Mandalay Bay released a statement and put the hotel on lockdown. The tweet read,

This evening there was a tragic active shooter situation at the south end of the Las Vegas Strip. Law enforcement and emergency personnel responded quickly to the incident and secured the scene. Law enforcement requested that we put hotels in the vicinity on lockdown to ensure guest safety. We will provide more information as it becomes available.

The hotel, which is operated by MGM Resorts International, is located near McCarran International Airport and the Luxor Hotel & Casino. The company also runs the Bellagio, MGM Grand, and the Mirage on the Las Vegas Strip. Because of the hotel's proximity to the airport, some flights were diverted, according to The New York Times.

This is a horrible, senseless tragedy, and our hearts go out to those who have been affected. If you want to help the victims, learn more here.