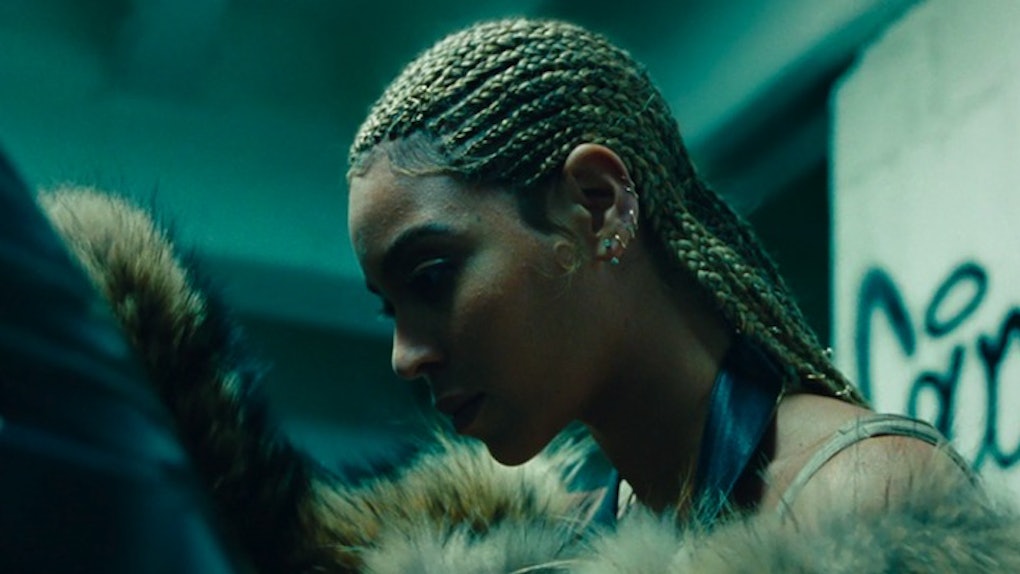 Forget Becky: 10 Women You Should Know From Beyoncé's 'Lemonade'

Beyoncé dropped her genius visual album Lemonade on Saturday night and we all collectively lost our sh*t.

But then we turned into sexist assh*les trying to track down who exactly "Becky with the good hair" is. Becky is referenced in the f*ck-you song "Sorry," where Beyoncé insinuates her man is having an affair with Becky.

The Internet hopped on Rachel Roy and Rita Ora as possibilities for the real-life Becky. People flooded their social media accounts with threats, accusations, slut-shaming and harassment.

This reaction goes totally against Beyoncé's whole ethos, which is about empowering women. Not to mention, Lemonade is a heavily collaborated album -- it's not a memoir. So who's to say Becky even exists in real life?

However, assuming the album is based on real life, if anything, the public shaming should be directed at the person who strayed from the marriage: Jay Z.

But all of this is beside the point. We're so focused on one line, we're missing the positive aspects of a groundbreaking visual album.

We already know G.O.A.T. athlete Serena Williams and actresses/musicians Amandla Stenberg and Zendaya crushed their cameos in the video, but here are 10 women you may not already know who helped make Lemonade the inspiring piece of art that it is.

The poetry recited between songs in Lemonade is written by Shire, a young Somali-British woman. Shire was born in Kenya, grew up in London and became famous through Twitter and Tumblr. You can learn more about her in her New Yorker profile.

Naomi and Lisa-Kaindé Diaz, AKA Ibeyi

Naomi and Lisa-Kaindé are French-Cuban twin sisters who together make the musical group Ibeyi. They appear in Lemonade along with a group of women basking in each other's awesomeness on a porch. You can learn more about them in their Guardian profile.

Chase, a 93-year-old chef, makes a steely appearance in Lemonade, showing the variety in the women Beyoncé highlights.

Chase is known as the Queen of Creole Cuisine and runs a restaurant, Dooky Chase, in New Orleans, which served as a Civil Rights meeting place. Chase was honored with a James Beard Lifetime Achievement Award this year -- which is turning into her best year ever, according to Eater.

The now-iconic yellow dress Beyoncé flounces in while joyfully slamming a baseball bat is all thanks to stylist B. Akerlund.

Akerlund is behind many of Beyoncé's outfits -- as well as Madonna's, Britney Spears' and Lady Gaga's -- including her getup in the underwater scene in Lemonade. You can learn more about her in her New York Times profile.

My dancer sister actually shrieked in excitement when ballerina DePrince showed up in Lemonade. DePrince, 21, was born in war-torn Sierra Leone, where her father was killed and her mother died of starvation.

DePrince was adopted by an American couple and started dancing. Now, she performs with the Dutch National Ballet. You can learn more about her in her New York Times profile, Guardian interview and the documentary "First Position." She also has a TED Talk.

Although Lemonade shows many women, there are sadly few females behind the scenes. But one woman behind the camera is Matsoukas, a music video director.

Matsoukas directed the earth-shattering "Formation" video, as well as videos for Rihanna's "We Found Love" and Ciara's "Work." Matsoukas is very close with the Knowles women and is directing "Insecure," a new HBO comedy. You can learn more about her in her Lenny interview.

In one of the most moving parts of Lemonade, Sybrina Fulton, Lezley McSpadden and Gwen Carr are shown holding photos of their slain sons. They are the mothers of Trayvon Martin, Michael Brown and Eric Garner, all of whom were unarmed when they were killed.

We know the names Trayvon Martin, Michael Brown, and Eric Garner. ... But we don't see enough focus on the women who brought them into the world, the women they left behind, the women who continued to fight for justice for them -- their mothers. The presence of Sybrina Fulton, Leslie McSpadden and Gwen Carr holding photos of their dead sons forced viewers to acknowledge their loss and their pain.

These women have entered the political sphere and are advocates for gun safety and against police brutality.