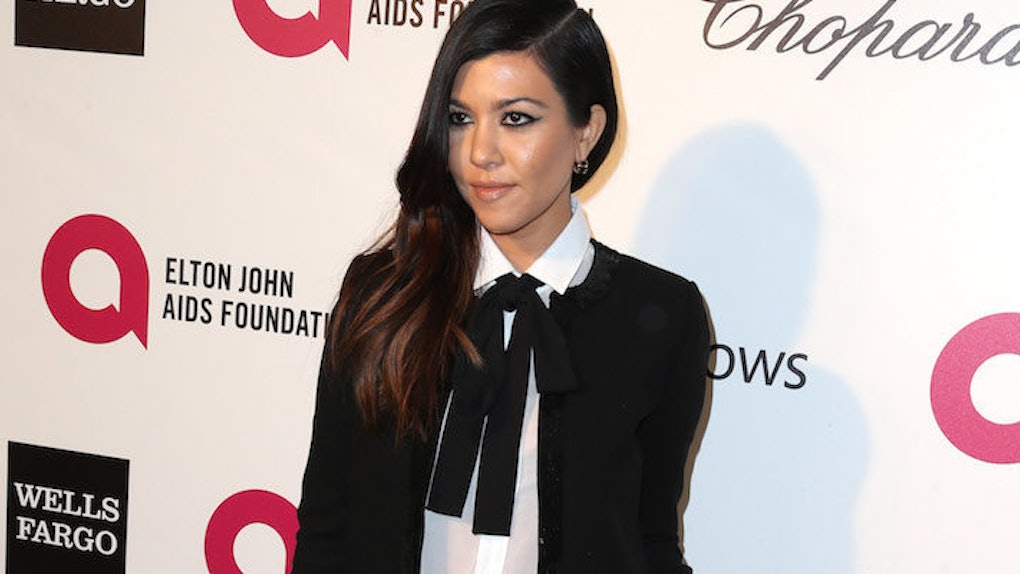 I'd like to preface by saying I do not like the Kardashians. They take up unnecessary space on our planet -- well, all of them except for Kourtney.

Kourtney is my KWEEN. Her style is impeccable. Her mom life is #goals, and her taste in men is, well, admirable in the looks department at least. (Scott wasn't exactly the best father or boyfriend, but he IS hot.)

Since Kourt is everything I want to be when I grow up, I had this brilliant idea to live like her. The easiest way to do that was to download the Kourtney Kardashian app for iPhone. I wanted to get info on her lifestyle straight from the source and not from tabloid bullsh*t.

I wanted to get the inside scoop on what she eats, where she buys her clothes, and how the hell she looks flawless all the time despite having three kids, a crazy f*cking family and an alcoholic baby daddy.

The first thing I had to do was go grocery shopping. Kourtney eats strictly organic, which wasn't exactly going to be easy on my wallet because organic food is expensive AF, but when Kourtney says "Jump," I say, "How high?"

So off to Whole Foods I went. I already shop there, but I never buy only organic; I just buy what looks good.

On average, a grocery trip to Whole Foods for the week will cost me anywhere from $50 to $70, but shopping à la Kourtney cost me up the butt: I ended up racking up $120 worth of food. Like, holy sh*t. I didn't know an organic chocolate bar was even capable of costing more than $4, but alas, it can and it does.

Monday rolled around, and with food in my cabinets, I began my journey to be the best Kourtney I could be.

Except my sweatshirt was a $6 men's sweatshirt from Forever 21, and my boots were $50 Zara boots.

TBH, I felt kind of naked because the sweatshirt just barely covered my crotch. But hey, I'd rather look like Kourt on a budget than not look like Kourt at all, so I'll take what I can get. I think I looked pretty darn cute, even though I wasn't technically wearing pants.

I would like to point out that despite how basic and completely unchallenging this recipe is, I don't cook at all. Ever. So whipping it up was relatively challenging for me. The only thing I'm certain of is how to make is cereal, and even then I make a mess.

Anyway, her stew recipe called for a bunch of fresh, organic vegetables, including chickpeas, broccoli and cauliflower, and then some things to season, including cinnamon and cayenne pepper. Because I'm Indian and, by default, have hard-to-impress tastebuds of steel, I knew I needed to spice up the recipe a bit and make it more my own.

And here is MINE:

OK, fine, I turned a vegetarian, brothy stew into a non-vegetarian meal because I needed some damn meat and some cool spices, like chili flakes. In the end, it turned out to be more of a curry than a stew, but to a non-cook, the two are essentially the same thing, so ... go me!

One of Kourt's most iconic looks is the one she wore to Kris Jenner's most recent birthday party. I love that she went for an androgynous look, because as chic as short flapper dresses are, they're kind of predictable. Kourt showed that there's a way to slay and be sexy without showing a ton of skin, and I wanted to do the same.

Luckily, I had a party to go that Saturday. I didn't have a bowtie, which, as small and seemingly insignificant of an accessory it is, was crucial to my outfit. It's what pulled the whole thing together.

My co-worker was generous enough to lend me her sparkly bowtie, and I threw it on with my black J-Brand Maria skinny jeans, a white sweater tank with a black collar and a cropped Theory blazer. I completed my look by throwing my hair into a low bun, and put on my Magenta Le Marc lipstick by Marc Jacobs, because it's the darkest lipstick I own.

Now I didn't have Kourt's exact outfit down to a T (because I think the last time I wore a long-sleeved, white button down was when I worked as a server at a country club) but I did the most with what I had. Surprisingly, though, I pulled it off enough.

What's interesting is that not one guy talked to me. Not one. I did get a slew of compliments on my outfit from my female friend's inner circle and her gay BFF, but no straight men approached me.

Whatever. I looked amazing, so it was hard to care. I also would have never in a million years have worn any semblance of this outfit on my own, so I'm glad I gave it a chance.

What did I learn from living like Kourt K for half a week? Well, her style is flawless, but it's a tad out of my comfort zone.

I had fun pushing the fashion boundaries and being coerced into cooking (OK, I didn't have fun with the latter). The one thing I was a bit disappointed in was I wanted to dress like her for an entire week, but I couldn't. Some of the outfits were a little outrageous for the average Joe, both price-wise and style-wise. Again, I went to work without pants.

There are affordable alternatives to Kourtney's outfits, but I don't already have obscure fabrics like lace or metallics in my closet. She did inspire me to branch out with my style in the future.

Kourt low-key doesn't enjoy cooking, either, as she admits in a recipe on her app. I will say, though, that most of what's on her app can be found on her Instagram or just online somewhere, so if I were you I wouldn't shell out the $2.99 monthly subscription for it. I'm probably going to delete this bad boy.

The bottom line is that you, too, can be like Kourtney K, even if you don't have a gazillion dollars, have a personal stylist and live in a mansion. It's about embodying her spirit. And just as I did, I have no doubt you can put together things from your own closet and pantry to do so.