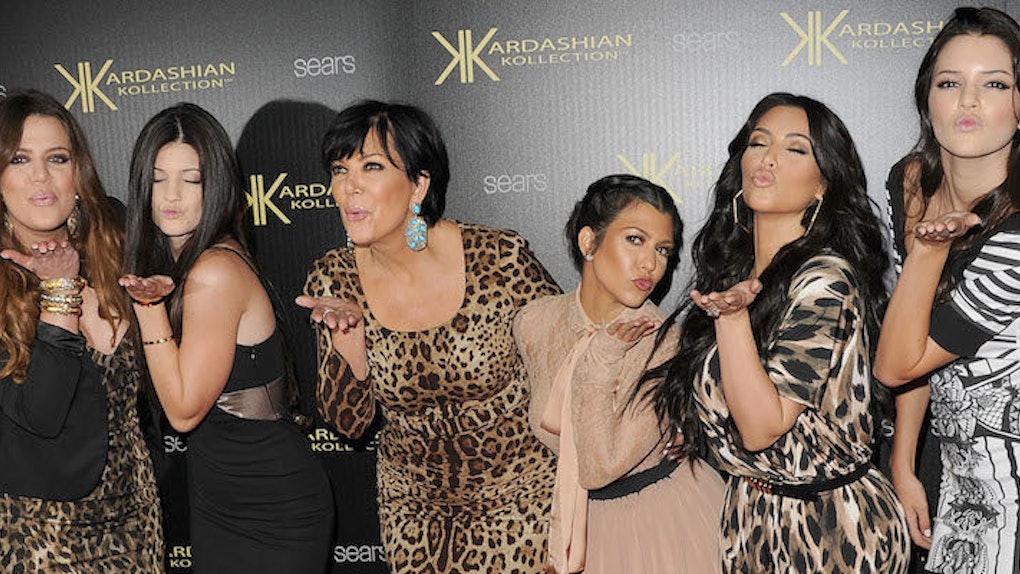 How Each Kardashian Represents A Different Part Of Your Soul

I was browsing the Internet the other day when I noticed something all the celebrity rag mags had in common: The Kardashians were in the top-read stories of the day, every day. Kardashian content f*cking flies, and it's absolutely unreal.

Why is it that every human being is so obsessed with reading about the Kardashians? Why would we rather read about them than, say, Amy Adams? Even I admit to spending roughly 85 percent of my browse time checking up on what Kourtney Kardashian is up to, and I don't have mush for brains.

We don't just enjoy watching them because it's fantastical to see a 17-year-old get a Rolls-Royce as a birthday gift; we watch because the Kardashians are an anthropological reflection of our own souls. Whether you're a banker, lawyer, construction worker or writer, you've got bits and pieces of Kardashian within you. This is some deep sh*t, guys.

There are two kinds of people in this world: the ones who love to hate the Kardashians, and the ones who hate to love them. Regardless of which group you identify with, you can't deny the inevitable: The Kardashians are a huge part of your small, insignificant life.

They're like the "Sex and the City" women of reality TV. Each one of them represents a different part of your soul You may not be a reincarnation of Miranda Hobbes, but she has some characteristics you look at and go, "Sh*t, I do that ALL the time." And since none of us is above "SATC" like we try to think we are, none of us is also above the Kardashians. Like anyone else, you are an immortal Kardashian through and through, wrapped in the guise of a mere mortal. We're all human, and we're all Kardashian.

Without further adieu, let's take a look at which side of your soul each Kardashian represents. We'll start with Khloé K.

Khloé is you in your short-lived gym phase.

You know when New Year's has just passed and you've recently made the transition from a fat, frumpy, lazy piece of sh*t into an active swan? And become one of those annoying New Year's resolution gym-goers that the rest of us seasoned gym-goers hate? Yeah, that's you.

We channel her spirit for a lump sum of three days (because we are not fabulous) and then we deem all our efforts fruitless.

We weren't once married to a world-famous NBA player, nor do we have our own shoe line, so I guess there really is no point in having a six-pack.

Kylie Jenner is blackout-drunk you.

She's you after you've had a few cold ones and are at the pinnacle of your night. Fearless as f*ck, she represents everything we wish we could be completely sober.

C'mon, would sober you rock a seven inch-long turquoise mermaid weave, grillz, and then upload an Instagram picture of that? Didn't think so.

She just DGAF. Kendall is the chick every guy wants to chill with and every girl wants to be like, but you're too high-strung to be like that without the help of some marijuana, so you puff and transform into her.

The only difference between you and her is that she just so happens to look flawless all the time, while you get high and eat everything in your friend's mom's kitchen cupboards.

When you're drunk, you're pimping out all your hoes to the hottest dudes at the bar, which is essentially what the former Mrs. Jenner does with her children, and every night is a competition with the last one to see how many successful sales you can make.

And the thing is, you're so good at what you do that you can't even regret your sketchy ways of scoring. You wake up proud of what you've done and swear you'll even do it again -- with the help of top-shelf liquor, of course.

Kim is you on the other side of a horrible breakup, when you've developed this insatiable appetite for life.

Kim K. Oh, Kim. Kim is hyper-motivated you. Carpe diem is your new life motto; no job is too big for you, and no accomplishment is too out of reach. You decide to invent something weird but necessary -- like Post-its, a la Romy and Michele -- and all of a sudden, your middle school bullies are spending their twenties talking about you.

Despite the fact that Kim is undoubtedly the clan member I love to hate the most, you have to admit she's smart as f*ck. She's your role model. Don't deny it.

Kourtney is you at your best.

Kourtney used to be you in your most vulnerable moment, since she kept taking back Scott even as he kept getting douchier. But these days, she knows who she is.

Out of all the Kardashians, she's the one who's made the greatest strides. She's come the farthest in the time we've known her. She's like the wife who left her abusive, alcoholic husband and emerged a stronger, more empowered woman. She had to hit rock bottom to realize her worth, and for that reason, she's the Kardashian I personally identify with the most (can't you tell?!).

Also, you can't help but envy her willpower. She is total #bodygoals; her dedication to wellness is admirable. In that way, I suppose she on the daily is like us on the first day of our three-day-long juice cleanses, which we can't help but forfeit on the second day.

Accept it, people. Consider yourself an honorary Kardashian.