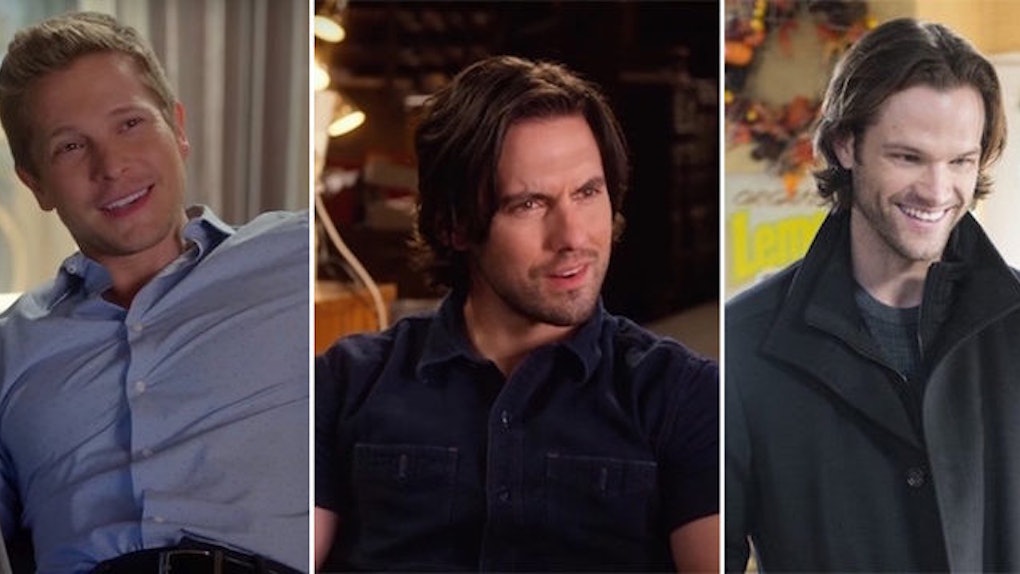 All right, you kept reading, so I'm going to assume we're all on the same page here.

If you haven't seen it yet, and you, like me, just love spoilers, here it is for ya:

So our girl Rory's pregnant. And the dad could essentially be anyone.

Well, based on the show, the only people we know for a FACT she's been with are Logan, Paul and that random guy in the Wookie costume she banged when she was reporting on a story about long lines in NYC.

But who's to say it's not another one of her exes? How do we know she didn't sneak off for a quickie with Jess after he gave her that golden book idea?! How do we know she and Dean didn't have another illicit rendezvous after she made that corn starch joke?

This baby could be anyone's, so let's play all the possibilities out here:

Logan would love his kids, especially if they were Rory's. Are you kidding me?! A fruit of his love with his beloved college sweetheart?! He'd freak (in the best way possible).

But, unfortunately, Logan's a busy guy. He's also engaged to another woman. Lots of other fish to fry here.

Basically, he'd make sure the kids were taken care of financially, and whenever he was in town, he'd be the most FUN, awesome, loving dad ever. But he wouldn't be around much.

Jess would be the quintessential cool dad. He has good family values drilled into him by the most stand-up guy alive, Luke, so he'd definitely be a hands-on dad who's around for his kids whenever they need him.

No, he'll be that cool dad who intimidates his daughters' boyfriends with just a firm handshake and a knowing look, and he'll probably offer his kids a beer at Thanksgiving.

Even though I'm a diehard Logan fan, I think Jess is best-case scenario when it comes to being a father.

Dean would be the little league-coaching dad who stays up all night with a baseball bat in hand while his baby girl goes to prom.

He's the dad who embarrasses his kids by making classic "dad jokes" and being a little too involved in their lives.

Despite his undeniable lameness, there's no question he'd be a fantastic dad. Even though the way he shows it is a little annoying at times, Dean would love the shit out of his kids and devote his entire life to making sure they knew it.

We don't know much about Paul, and honestly, it doesn't seem like Rory does either.

He seems dorky, but nice enough, and from the limited information we have on him, it's safe to say he'd be a pretty good dad.

He's thoughtful and remembers anniversaries with Rory and conversations he had with Luke and Lorelai that they have no recollection of. He even brought everyone thoughtful gifts when he came over in that one episode.

He's also pretty dependable considering the fact that he sticks around no matter how many times Rory blows him off.

Thoughtful and dependable make for a pretty good combo of dad traits, so I'm going to guess he'd be pretty good at the job.

In the second episode of "Gilmore Girls: A Year In The Life," titled "Spring," Rory breaks down to Lorelai in their hotel room and admits she slept with a guy in a Wookie costume.

If you called the shots, who would you pick to be the father of Rory's child? Cast your vote here: