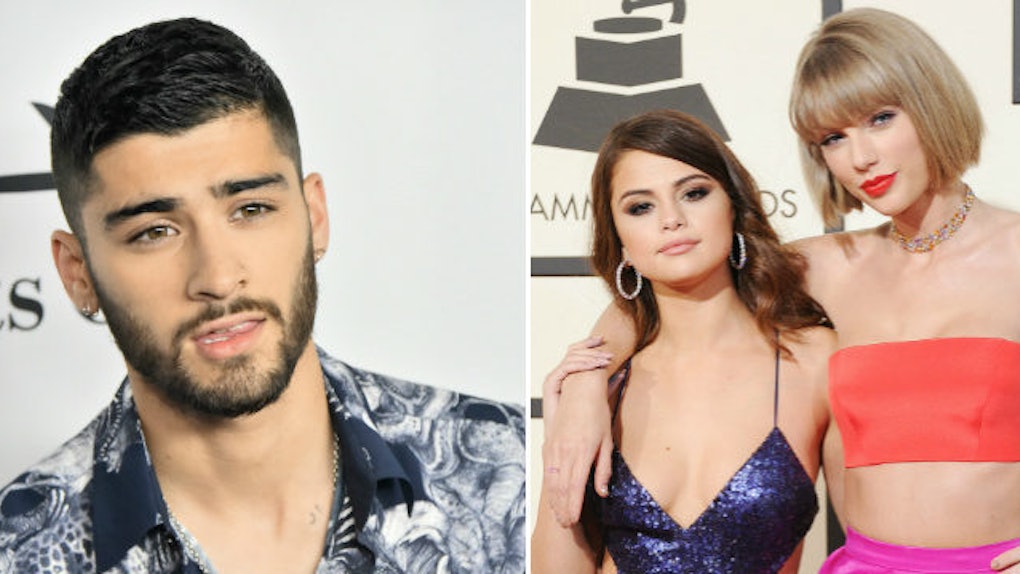 In a lot of ways, living in the celebrity spotlight is a lot like living in a small town.

There aren't that many jobs to go around so there's a lot of competition, a lot of people who use drugs and a dating pool that is REAL LOW, friends -- like a severe drought.

It wasn't unusual for my friends to trade each other's boyfriends throughout high school and even during some summers in college. In fact, I'm pretty sure my friends dated every guy I dated.

The same goes for celebrities. You have to date on your level, which means you're probably going to end up dating a friend's ex.

Members of the same social circle, Bella Hadid and Selena Gomez, have both dated The Weeknd.

But this is where the bubble gets a little smaller.

What's the big deal, you ask?

And who just recorded a song with Zayn and shouted a happy birthday to him today, while also hinting at their music video?

None other than the PACK LEADER herself, Taylor Swift.

It's no secret Taylor Swift and Gigi Hadid share a very strong friendship, and Taylor's friendship with Selena goes down in history books as one of the greats.

In the animal world, Gigi, Bella and Selena would fight each other so they knew the rightful order of the pack.

In the celebrity world, eyes point to Swift for her ruling judgement.

Obviously, the first shots were fired after Selena was caught making out with The Weeknd just a few months after the "Star Boy" singer and Bella broke it off.

Bella fired back at Selena in a classic, yet heartbreaking, Instagram unfollow.

While it's been a few months since we've seen Taylor and Selena spending quality time together, it looks like Tay still has got her back.

(To be fair, Selena was a bit busy dealing with physical and mental health issues.)

Selena was recently on Instagram Live when she was asked what she learned in 2016.

It's really important to be aware of the people that you're surrounding yourself with, the people that are purposefully the ones you are spending time with. We go to dinner sometimes with friends, and sometimes we'll go to dinner and we'll leave and we'll think, 'That was such a pointless dinner. What did I learn from it? What will I gain from it? What was the point of it?' And then other nights we'll sit at the table for five hours with friends… where you are in life. Like where we are, we're constantly checking in with each other. Like 'hey, are you good? Are you good?'

While not there in person, Taylor Swift did comment on the live stream.

Hmm... it looks like Taylor is on Team Selena, but this did take place before the infamous photos of The Weeknd makeout sesh broke the internet -- and before Taylor's Instagram shout-out to Zayn.

Or, you know, it could be that they're all adults, and no sides have to be taken.