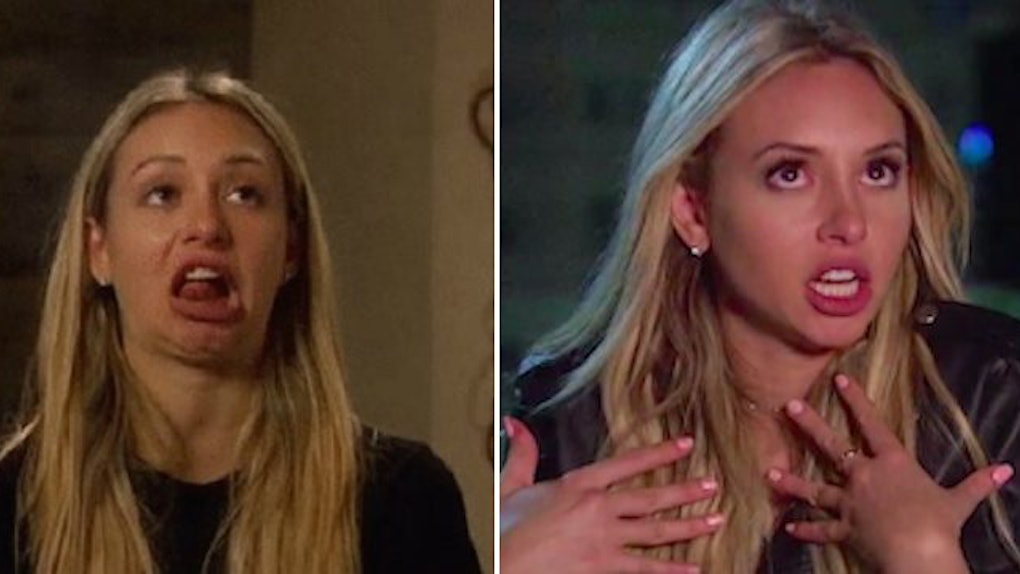 Why The 'Crazy Girl' Like Corinne Gets The Guy

Corinne Olympios defines the villain everyone loves to hate on this drama-filled season of “The Bachelor.”

I have to hand it to our main gal of the hour: She does an incredible job of keeping all us “Bachelor” fans on the edge of our seats (and downing bottles of wine in anticipation).

While my girls and I prepare to watch the show every Monday night with (much-needed) chocolate-covered popcorn, I'm always thinking, “What the FUCK kind of drama is crazy girl Corinne going to whip out tonight?”

Without the wild shenanigans Corinne brings to the table, this season would be incomplete... and probably boring AF.

Whenever I think Corinne's going to get the boot, she proves me wrong and comes out on top once again.

Here are 10 reasons why a "crazy girl" villain like Corinne always wins at life... and actually gets the guy:

Corinne straddled Nick in a bouncey castle while making out with him.

She gave the other contestants a show in the process to show them who's boss... because why not?

She's super ballsy, and Nick always seems to have an awesome time with her.

Exhibit A? When Corinne didn't give two fucks about the other contestants and lured Nick to lick whipped cream off her boobs, of course.

YEP, she had no problem taking out that whipped cream in order to keep things spicy and flashing her naked boobs while posing with Nick during their photo shoot in the pool.

4. She flaunts her sense of entitlement.

Seriously, though: This chick is 24 years old and has her very own personal nanny.

And she's proud of it, too.

Corinne knows exactly what she's doing… and she always leaves us (and Nick) wanting more.

6. She's the real MVP of the shock factor.

Our gal Corinne is the queen of putting all the attention on her.

7. She's all about that cocky life.

She's not JUST confident: Corinne is in it to win it, and makes it known she has this one in the bag.

Corinne is a pro at giving backhanded compliments to girls and saying negative things behind their backs.

But in front of Nick, she covers her tracks and is as sweet and ~innocent~ as can be.

9. She obviously DGAF her dad's watching.

Corinne has no shame. She whips out her boobs left and right in the name of, well, making a name for herself.

10. She constantly exudes purpose and determination.

Corinne keeps her eyes on the prize and never strays.

This chick we can't help but love to hate made a name for herself, so major props to her in that department.

Everyone tunes into this season of “The Bachelor” because of the humor and endless drama Corinne brings to the show.

It's clear the "crazy girl" is always the one who stands out the most, and ends up with the guy in the end. Like the rest of us, he just can't seem to get enough of what her craziness has to offer.