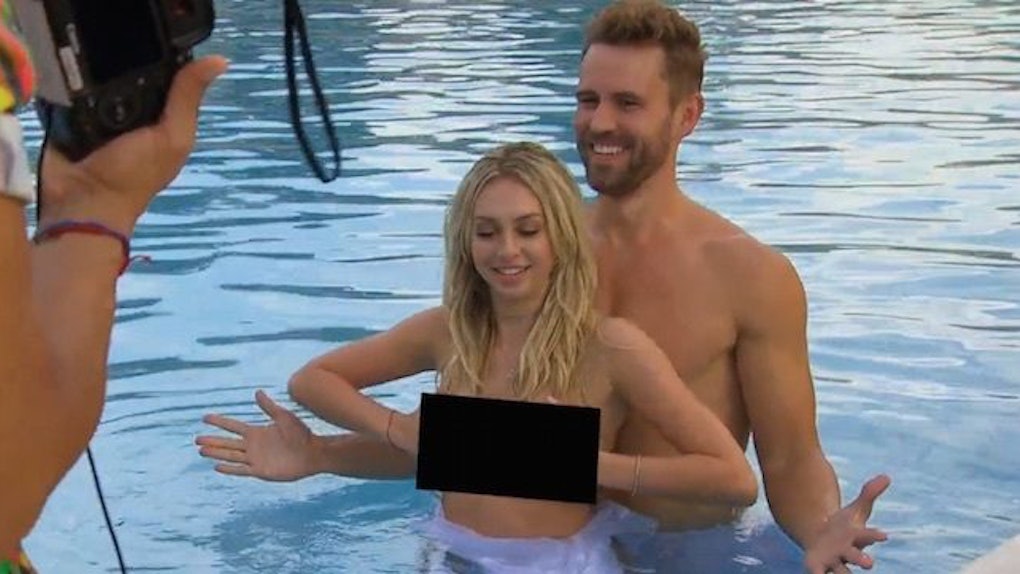 On this week's episode of "The Bachelor," things got a little NSFW between Nick Viall and contestant Corinne Olympios.

Monday night's group date required the women to dress up as brides and take themed photos with their handsome man.

The ladies were assigned a specific costume and had to take the best pics -- and have the strongest connection with Nick -- in order to win the challenge.

If you watched "The Bachelor's" premiere last week, you know Corinne has been dubbed this season's villain.

Personally, I can't get enough of the girl. I die laughing at everything she says. You're my hero, CO, keep shining.

But not everyone feels that way -- especially not the other contestants.

You see, Corinne is super feisty, opinionated and competitive. She doesn't mind interrupting the women to have more time with Nick and she'll do whatever it takes to one-up everyone... even if that means taking off her top and making Nick grab her naked tits.

MMMHMMM, you read that right. Corinne decided to take things to the next level during her wedding photo shoot and take off her bikini top.

According to the 24-year-old, she simply did it so Nick could "feel the more Corinne side of Corinne."

Yeah, whatever that means.

Corinne and Nick did start off in the pool wearing their clothes. That lasted for about, two seconds.

Then, Corinne undressed Nick and took her top off. No one saw it coming, and Nick was even like, "Haha, whoa. Boobs!"

Then Corinne put her bare naked ta-tas on Nick's chest and hugged him while a man took creepy photos.

Oh, and then Corinne wanted to pull a "Janet Jackson" and made Nick hold her boobs. This happened while 12 other women watched.

High five, Nick! YOU GOT THE TITTIES!

After the photo shoot, Corinne put her top back on and gave great commentary about the experience. She told the cameras,

Nick and I do have a lot of sexual chemistry, there definitely was another spark in that pool... him holding my bare bosoms.

I didn't just go into this photo shoot with no clothes, I actually was daring enough to have clothes and take them off. I'm definitely gonna win that extra time with Nick today.

To everyone's surprise, Corinne actually won the challenge and got more time with Nick. Lmao, this is the best show ever.

My favorite part of the entire scene is when the photographer asked the ladies,

Did you have fun?

And Corinne shouts back at him,

Seriously, re-watch the clip. It's worth it just for that moment.

Corinne, everyone on the show might hate you, but you're a hero in my book.