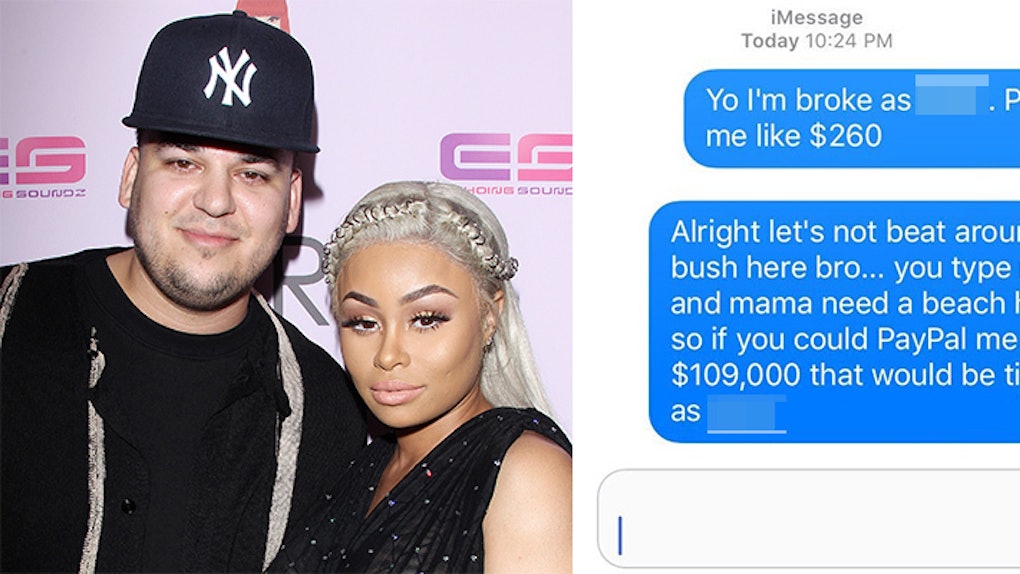 Man, the internet is full of savages.

People are really going after Rob Kardashian right now, and no one's holding back.

Earlier in the week, Rob leaked Kylie Jenner's phone number on Twitter because he was upset with his sisters (especially Kylie) for not inviting Blac Chyna to his baby shower.

Later in the week, news broke that Chyna and Rob called their relationship quits, but both parties have put the rumors to rest.

Fast forward to yesterday. Thursday night, Blac Chyna went after Rob Kardashian on Snapchat and taught him a lesson for texting other women.

She lashed out at him and posted his phone number on Twitter so everyone could have it and hit up his phone.

Obviously, fans took up the offer. People immediately swarmed his phone with texts and phone calls to the point where you could even hear it buzzing in Chyna's snaps.

According to Twitter, it looks like people had a lot of not nice things to say to the 29-year-old.

Some people used the opportunity to continue to harass Kylie Jenner about her Lip Kits.

A majority of the texts demanded money...and LOTS of it, too.

I'm not joking, I'd say about 90 percent of the texts were people asking Rob to send cash.

Some of the messages didn't make any sense whatsoever...

And a couple of them made fun of Blac Chyna's classic line in "Rob & Chyna." ANSWER THE QUESTION, ROB!

Yeah, some people got REALLY into it.

A few sports fans wanted people to focus on what really matters, like the Warriors game.

And a lot of fans just took the time to lash out and blow off some steam.

These savage girls even added Rob to their group chat. LOLOLOL.

For the most part, things were playful. Some of the messages, however, were just straight-up cruel.

Hang in there, buddy. I think it's cute how much you love Kris!

Oh, and change your number, ya know, before it's too late.