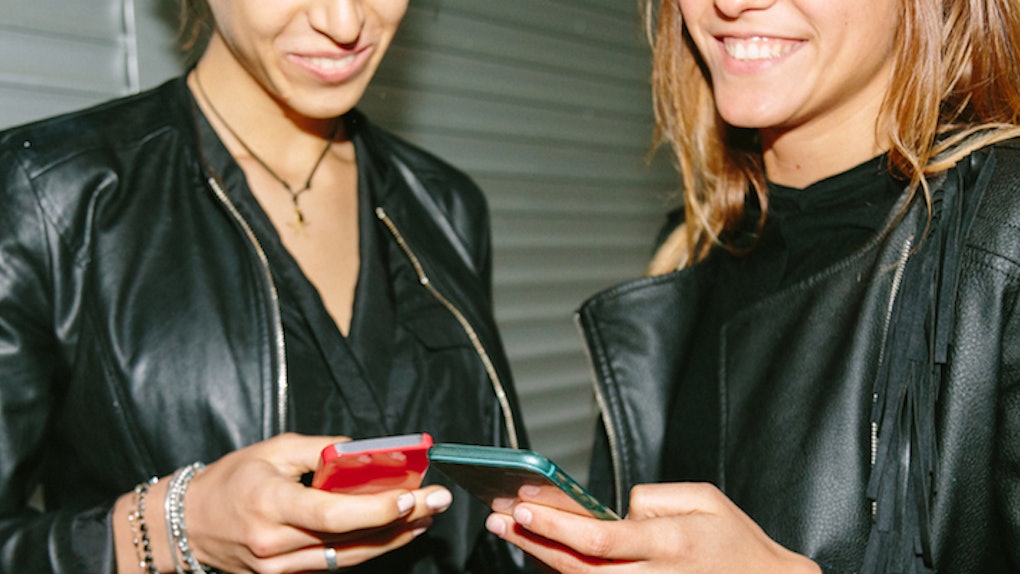 8 Reasons Dating Apps Are Actually The Greatest Invention Ever

These days, it's seriously so easy to not be lonely. But still, I have a bevy of lady friends who are totally unwilling to fill out a basic Bumble profile. Instead, they complain about single-hood, not meeting anyone and spending Friday nights Netflix and chilling with their cats.

Girls will come up with a million excuses as to why they're not the online dating types. It's always, “It's so weird,” or “I just can't.” I've heard several say, “online dating isn't for me,” after trying Coffee Meets Bagel for about two hours.

The girl who was performing my Brazilian wax a few months ago said to me, “I thought Tinder was just for ratchet people?” That one was a real shocker.

Here's my plea to all the ladies who “just can't” when it comes to online dating -- just do it. There are upsides, trust me. I know us seasoned vets complain about the creepy messages (like the dude who was into breastfeeding), and the strategically angled dick pics, but, honestly, it's not all bad.

When things got slow in my love life earlier this year, I turned to my iPhone to help break my dry spell. And, yes, it certainly yielded some less than impressive results, but it's also been super successful. I've been dating a great guy for the past six months, who is neither a toothless wonder, nor a sleazy man whore.

Here are eight reasons why you should give dating apps a shot:

Dude, (almost) everyone does it. Put your ego out of the way, and realize you're not too good for Tinder. No one will judge you for using a dating app, or website. Instead of hiding it, own it.

2. It means you have options.

So many people complain about how dating apps are the ultimate decline of traditional courtship, but all it really means is that you have options.

You don't have to settle for less, because you can literally make a date with another dude for later that night if your current date isn't working out.

Yup, that means they don't know your friends, your exes or your co-workers. If, or when, it ends, you don't have to worry about awkwardly running into them at your college roommates apartment-warming party.

Inexperienced in the dating world? Don't worry. OkCupid will give you plenty of opportunities to do, and say, the wrong thing with little to no consequences, because, yes, these are strangers.

5. You can meet someone while lying in bed.

Dating apps give you the freedom to meet your soulmate by swiping left or right, while watching a “Gilmore Girls” repeat for the 47th time, makeup-less, in your sweats.

6. There are plenty of “normal” people.

It's really not a just bunch of circus freaks and IT geeks.

Don't want a relationship? Great. Lots of men don't either.

Apps make it easy to get your sex fix, and not worry about the emotional repercussions of sleeping with your guy bestie.

8. You can get serious if you want to.

OK, so you do want a relationship? Fantastic. Here's a secret: there are some men out there who want more than just a bang. There are mature, serious dudes on even basic apps like Tinder. You might even meet your future husband.

I totally get that dating is hard, it's tough to meet people you connect with. It's also scary to talk to strangers via an app, and getting illicit messages from creeps is super off-putting.

But, really, what's so different about meeting a guy at a bar or club, versus meeting them online? The same dudes that you'll meet IRL are right there on Tinder, they're just more plentiful, and accessible. Plus, you get to thoroughly pre-screen people before you go out with them.