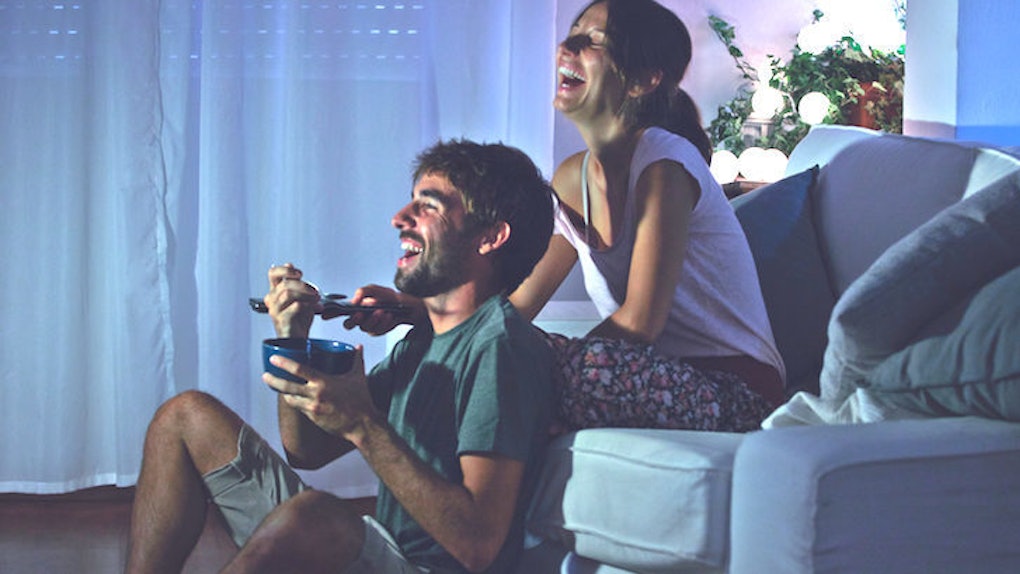 A PSA To All Single Ladies: 'Netflix And Chill' Is Not A Date

Any guy with half a brain knows that these things are the way to a girl’s heart. In fact, it looks like pretty much everyone has figured this out.

Late at night, you get the text: “Netflix and chill?”

Sounds great, right? You get to out with that cute boy you’ve been texting, watch a little Netflix and snuggle. What on earth could go wrong in this situation?

The phrase itself is seemingly innocent. But it has dangerous implications. I feel like I’m constantly informing people of what happens when men lure women into a false sense of security.

I have a friend who is hopelessly single and rather naive about dating. You’d think after a few years of nothing but casual dates and dick pics, she’d be a wise soul. She's not.

The other night, she was sitting on my windowsill, drinking a glass of cabernet, and telling me how excited she was about a new guy.

“He said he wants me to come over and watch Netflix. We’re going to cuddle and watch a documentary.”

After I made the biggest eye roll in the history of mankind, I explained "Netflix and chill" to my insanely optimistic friend.

My friend goes to this dude’s house, and two minutes into “March Of Penguins,” homeboy was pushing her head down trying to get that head action.

I didn’t want to add insult to injury, but I have to admit that I said, “I TOLD YOU SO."

"Netflix and chill" is not a date. Please stop playing so dumb. Please stop being surprised when some douche expects you have a mouth full of scrotum before the opening credits of that Netflix drama you wanted to start and finish. But he's into a different kind of finishing.

If he said you were going to "Netflix and chill," he wants you to suck his dick. You’re not going to catch that episode of "OITNB" today, girlfriend. He has other plans in mind.

I guess we should all aspire to have a good chill-to-pull ratio. You know, like keeping the time we hang out with our friends proportional to the time we spend chasing the opposite sex.

If he’s asking for "Netflix and chill," he isn’t asking you to go steady.

If he’s inviting you over to his place to watch a documentary and hangout, he has no intention of making you his girlfriend.

He's putting in minimal effort because he doesn't see the value in planning for the future.

A nice guy who wants to date you is not going to text you at 8 pm and ask, “Netflix and chill?” A nice guy is going to call you on the phone and ask you OUT on a proper date. He isn’t looking for a girlfriend; he’s looking to get his dick wet.

If he says “Netflix and chill,” you should know by now he wants to do anything but. He isn’t looking to snuggle. He’s looking to stick his hands in your panties and convince you to raw-dog.

At this point in the game, you need to stop acting surprised when a guy interprets your willingness to chill as a desire to f*ck.

I know it’s messed up, and we should f*cking be able to watch Netflix and chill without having a penis shoved in our faces. But that's not the reality.

Getting head should be a nice surprise, not an expectation.

There is nothing “chill” about his dick in your mouth when you're ten minutes into your Netflix original.

What the actual f*ck has happened to society? Why does a guy expect that a girl who agrees to "Netflix and chill" is going to deep-throat his dick?

Ladies! You should be giving head voluntarily. It should not be an expectation. Just because you want to watch a documentary doesn’t mean you are obligated to have sex with someone.

"Netflix and chill" has set us back a century. Just because we don't always go on the traditional dates of past generations doesn’t mean we need to stick it in fifteen minutes after meeting face-to-face.

He probably didn’t even feel the need to clean before this.

Look at this buddy! He’s probably wearing basketball shorts and flip-flops. His junk likely isn’t even properly cleansed. He literally put no effort into his appearance.

And you know why? Because this is "Netflix and chill." This is not a date. If he can’t even bother to take a shower before seeing you, how do you expect him to be a good boyfriend?

He’s not interested enough to pick up the sh*t around his apartment, and he certainly doesn’t give enough of a f*ck to make you dinner.

He’s just counting on turning on this show and getting some action. He’s probably not even paying for his Netflix. He’s likely on his roommate’s plan.

If he can’t even take you out, he doesn’t respect you.

There is nothing that screams “I have zero respect for you!” like offering up "Netflix and chill." It is truly the most obvious and cliché thing a guy can suggest.

It’s not even worth a bronze metal in the Dating Olympics.

If he’s suggesting "Netflix and chill," he isn’t the least bit into you. He isn’t even able to commit to a real date. He can’t even be bothered to take you out for a meal or a real f*cking movie on a big screen.

Do you really want to be with a guy who thinks so little of you -- who gives so few f*cks that all he wants to do is invite you over for a documentary and (likely unreciprocated) oral sex?

If he is inviting you over to "Netflix and chill," he is literally asking you to come over and suck him off under the guise of a respectable first encounter. SMH.