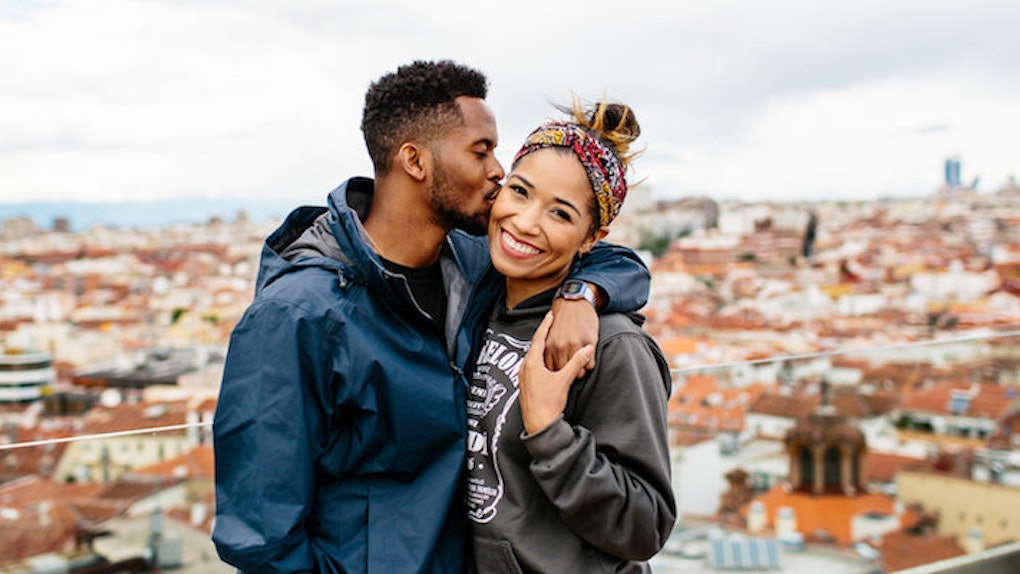 The start of a new relationship is an exciting time full of butterflies, getting to know each other and memory-making.

There is a reason so many long-term couples find themselves trying to replicate the thrill of that "new relationship" feeling: It's addicting.

What happens when your new significant other's ex won't let happily ever after exist?

Luckily for me, my relationship had a happy ending — I married the guy. But, we had a very, very bumpy beginning.

My SO and his ex-girlfriend broke up two months before he and I started dating. While a lot of other drama ensued, the main issue was that she blamed me for their breakup.

She saw me as "the other woman." He had to have cheated on her with me. There was no other reason for him to end their almost two-year relationship.

Her anger and pain led to a rough several months for us. Every secret he ever told her, she seemed to be telling the people it would hurt the most. Every piece of dirt she could fabricate about me, she spread like wildfire. It was relentless.

I was a constantly battling trying to understand her pain and let it slide, while also being firm in the fact that I wasn't this horrible person she made me out to be. But it was tough.

It's been a year of blissful marriage for us now, and I can honestly say, for these reasons, she's actually made me a better person:

1. She taught me to be secure in myself.

Growing up, I had a lot of self-esteem issues from past experiences. It has always been a struggle, even as an adult, to rest securely in who I am.

But someone painting a picture of who they wanted me to be forced me to find security in who I really knew myself to be.

She made me out to be a liar, cheat, hypocrite and a bitch, but I became confident in knowing I am honest, faithful, true to my word and kindhearted.

The more she pushed against me and lashed out, the more I found myself finally feeling good about myself and about the kind of person I know I am.

2. She taught me what it means to be a friend.

As with any breakup, there were a lot of issues with my husband's friends, who were also friends with his ex.

When I started meeting my husband's friend group, I felt overwhelmed. I was trying to get to know these people, while also letting them form their own opinions of me, outside of what my husband's ex and I were saying.

In this process, I learned that friendship is not just about going out, having a good time and liking pictures on Facebook. It's more.

Friendship is intentionality. It's taking an interest in someone's life and asking real questions . It's checking in on each other "just because." It's knowing that no matter who else your friend is friends with, you can rest assured they still love you and want to be in your life.

With my SO's ex, I had to reassure our mutual friends (and myself) that they can be friends with both of us. It's OK to have some friends your other friends may not like.

3. She taught me to be secure in my SO's feelings for me.

Sometimes, it's easy to forget our SO had a life before us. Exes are usually out of sight, out of mind.

But, when the ex is still involved in your SO's life, even by proxy, it can be a challenge.

It's hard to forget the memories his friends are laughing about involved her. That trip they all went on together? Your guy and his ex shared a room together... and they may have even slept together.

This was probably one of the hardest things for me to overcome. But slowly, I started to retrain my brain.

My SO left her for a reason. And then, he chose me, not her.

So, in a way, her involvement at the start of our relationship actually helped me. Knowing what he left (she seems to be a lot of fun, pretty, funny and full of life) and knowing he is with me instead has helped me to feel secure in his feelings for me.

4. She taught me to see the best in all people.

When someone attacks us, our natural instinct is usually to fight back, right? For me, at least, that was what I wanted to do.

I wanted to react out of hurt and hurt her back. But instead, I thought long and hard about it.

When your SO's ex is lashing out at you, ask yourself why they're doing it. Often, it's out of their own pain and hurt. So when you think of it that way, it can change the way you see that person.

You begin to see them as more relatable, and you may even feel greater empathy for them. Rather than seeing her as cold, heartless and just plain horrible, I began to view her as hurting, broken and in need of understanding.

So after taking all of this into consideration, I can honestly say I have no hard feelings against my SO's ex. I empathize with her, I have compassion for her and I genuinely want happiness for her.

After all, it's the least I can offer her after all she taught me.