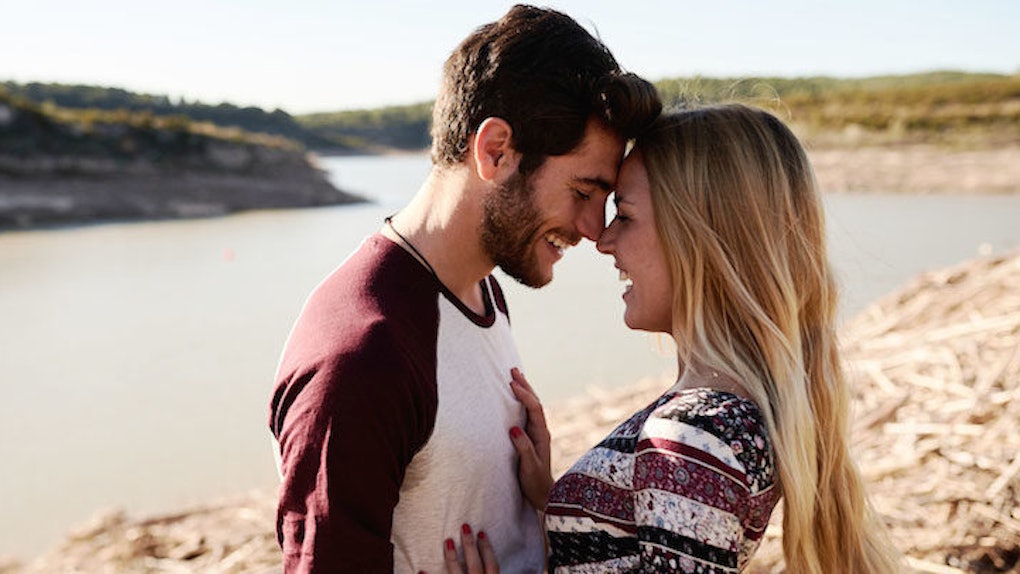 If Your Boyfriend Does These 8 Things, He's In Love With You

Falling in love is a beautiful thing. But it can also cause you bit of stress. You want to let yourself fall, but there's one question holding you back: Does your partner love you?

But it's easy to be afraid of loving someone who doesn't love you back. You're afraid of getting hurt. And that's no surprise, especially if it's the first time you've loved. As far as loving a woman goes, it's pretty easy to tell when she loves you back. I'm not sure if women are better at loving or just worse at keeping it hidden.

Men, on the other hand, are taught to hide their emotions. They're told that emotion is a sign of weakness. And because of this, they have a difficult time accepting emotions for what they are. Even when men do accept how they feel, they keep it to themselves. I'm sure women find this infuriating.

But just because he's never told you that he loves you doesn't mean that he doesn't love you. When it comes to men, actions really do speak louder than words. If your boyfriend does these 8 things, you can rest assured that he loves you:

1. He sends you a message almost every morning.

When the first thought he has in the morning is you, that's when you know that he's in love.

Love is a form of obsession -- it can be very healthy and incredibly rewarding. When you've infiltrated his psyche to the point that he wakes up thinking of you, that's when you know you've got him. Of course, not all guys are open about the way they feel -- some are even doing their best to resist the urge to contact you and wish you a good morning.

But when you're in love, you have only so much self-control. Even the strongest-willed man will break a few times a week and show you that you're his weakness.

2. He checks up on you randomly just to see how you're doing.

People -- both men and women -- are egocentric beings. Women do have a tendency to be more giving and caring, but generally speaking, we're our own favorite people.

Until, that is, we fall in love.

Once you fall in love, you begin to care just as much about this other person as you do yourself. Men can be especially funny when it comes to checking up their girlfriends … some will try and play it off as if they don't care as much as they really do (we can be silly like that), but if he's hitting you up multiple times a week, for seemingly no reason at all, that's when you know he's hooked.

3. He doesn't mind going out of his way to make your life easier.

You know how a woman will often complain about her husband being lazy and not wanting to help out? Well, she's only complaining because, once upon a time, that same man went out of his way to make her life easier. He used to inconvenience himself just to help her out. He would pick her up from out of his way when she needed a ride. He went to the store and picked up whatever she needed without her having to beg or argue with him. He didn't mind being worse off as long as she was better off.

If that's your boyfriend, then chances are he loves you. How do you keep him from turning into a lazy husband, you ask? Well, let's leave that for another article.

Love is happiness. Love is joy. Love is a mind filled with great memories and thoughts of a wonderful future together. You can't possibly have all that on your mind and not smile.

If he grins from ear to ear -- if his eyes light up at the sight of you -- he's in love with you. If he loves you, you'll receive just about all of his attention.

5. He asks you about your day, and then he actually listens.

I remember being in love and caring so much about my ex's day that I even wanted to know what she ate (to make sure she was staying healthy). That's love.

When your man cares about you so much that he wants to know what's going on in your life -- in the finest of details -- wants to know what you did, what you saw, how you succeeded and failed, the adventures that you went on, he loves you. He wants to know about your day because he wants to be a part of it in some way or another -- even though he wasn't there by your side to actually experience it.

6. He asks you for your opinion.

And this isn't just so that you feel like you're giving your two cents. He wants to know your thoughts on the matter because he values your opinion. He values the way that you see the world and wants to make sure that his life aligns with yours as much as possible.

When a man loves you, he wants your input on his life because -- maybe without even knowing it -- he is trying to merge his with yours. And what better way than to start seeing the world through your eyes?

7. He gives you the better pillow.

As kids, just about all of us were taught to share. But this isn't just sharing; this is giving. To him, giving you more is just the same as if he were taking more himself. It's better, even, because it makes him even happier.

He walks on the outside of the sidewalk, because if a car were to swerve, he would get hit instead of you. He feeds you. He checks up on you. He is always there when you're feeling down or under the weather.

When a man cares for you better than he cares for himself, he loves you. He may not be a fighter, but seeing you in danger flips a switch. He turns from a teddy bear to a grizzly in zero seconds flat.