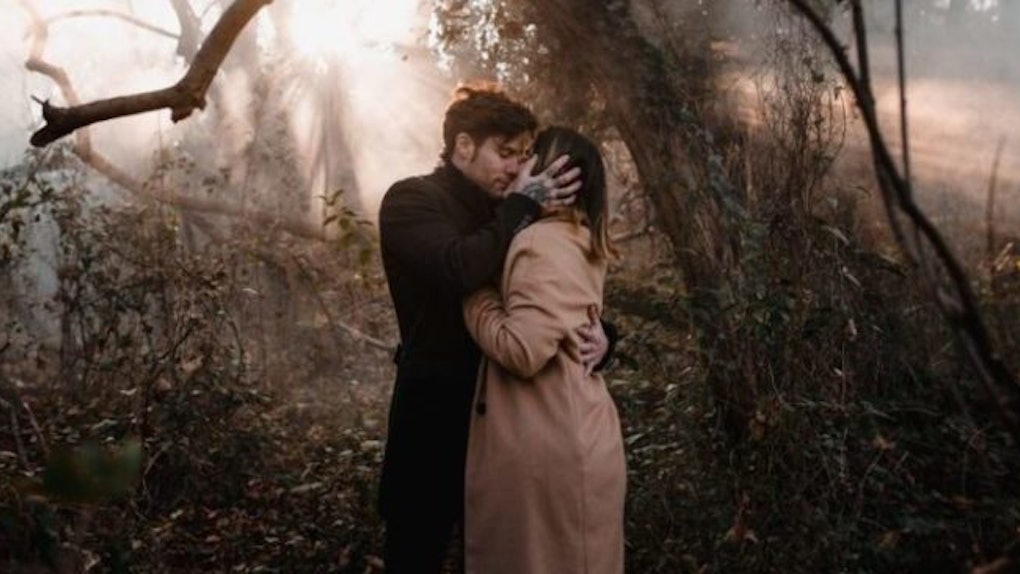 6 Signs He Is Committed To You, Even If He Hasn’t Said It Yet

If you've think you've found the person you want to commit to forever, you probably feel really excited and happy.

That phase in a relationship where you haven't yet totally discussed where you are, but you just know the two of you are secure and in love, is one of the most fun times in a couple's life. While there may still be a bit of uncertainty there, which can make it even more exhilarating, there (hopefully) should also be a lot of happiness.

However, sometimes the answer may not always be that clear. Perhaps you're someone who values verbal affirmation of commitment over anything else, or perhaps the person you're seeing may just not be forthcoming with their emotions. Or, maybe you're happily in a relationship and just want a little bit more assurance that your partner really is ready for a commitment with you. Regardless, wanting to be sure that the person you're giving your love to is committed to you is not uncommon.

Of course, every relationship is different, and some people will vary in the ways they show affection and commitment. To get a general sense of some things to look out for, I spoke to an expert about the signs your partner is committed, even though they may not say it.

1. You Are Their Priority

James Preece, dating expert and consultant for ModelClub.com, says that it's clear when a guy is committed because he makes his partner the priority in his life. If they put you before everything else, that's one of the best signs they are committed.

"If he chooses to see you rather than spend time with his friends, you know things are going well," says Preece.

Conversely, of course, if your partner is spending all of their time with other people and not making time for you, they may not be ready for commitment. Preece says it's even more assurance that they're committed if they don't mind moving things around just to get to see you. It means that you make them feel really good.

"If he's willing to adjust his schedule to fit in time with you, then that's even better," says Preece. "He loves being with you and feels most comfortable when you are together."

2. You Have The Keys

"Once a man gives you the keys to where he lives, he's 100 percent committed," says Preece.

I'll admit that, in prior relationships, I avoided giving out my keys to people at any and all costs. I was a really private person who hated the idea that someone might drop by unannounced or unwanted. Before we got married, though, my husband had access to my apartment, and it was the same for me at his house. It was clear very early on that we were both very ready for a long-term relationship.

Preece says it's about more than just access, though. It's about trust. "It's a fantastic sign that he completely trusts you and is quite happy for you to stay even when he's not there," he says.

3. They Remember The Little Things

Preece says it's not always about the big things, like time together and space in each other's lives. Sometimes, it's about the little things, literally: "A committed man is one who listens to everything you say, even if you don't think he is."

Preece emphasizes that doesn't just mean your partner is listening to your major life plans. Instead, they'll know literally everything about you and will show you that they do by the things they do for you.

"He'll know your favorite foods, places, and things, then go out of this way to make sure you get them. He does this because he wants you to feel happy and secure," he says. "It might not be grand gestures, but he'll surprise you by dropping in little reminders every now and again."

If your partner has already nestled up comfortably in that committed couple life, they'll be calling you a "we" even when you don't know it.

Preece says this comes through most clearly when they're talking to those who matter to them: "Pay attention when you hear him talking to his family and friends. Is he referring to you as a couple? Maybe he'll say something like 'We'd love to come' without even considering an invite might just be for him."

It's the moments where they offhandedly say something about the two of you being a unit that you really know they want a long-term committed relationship. And be aware that the reverse is true, too: If you think you're a "we," and they just think solo, you may be headed for heartbreak.

An immature person who isn't ready for a commitment will use stupid dating tricks and tactics to keep you hanging on. A mature, loving partner who is ready to be with you forever won't do any of that.

"A genuine, committed guy knows what he wants and isn't afraid to really go for it," says Preece. "He doesn't try to test you and see if he can make you jealous or push your buttons. Instead, he treats you with respect and does everything possible to make you happy."

This is not just because they want brownie points, says Preece. It's because seeing you happy will make them really happy, too. A person who wants to be committed to you won't take the risk of playing games and losing you, because, as Preece says, "He knows what he has and has no intention of losing it!"

6. He Talks About The Future With You

A person who's not super into commitment will avoid talking about the future at all costs. I was actually someone who hated commitment before I got married, and anytime someone would bring up a possible future, I'd get out of it with a vague "Well, who knows!" and then try to pick a different topic as quickly as possible. When I connected with my husband, though, that all changed, and I wanted to talk about our future together a lot.

Preece says if a person naturally talks about your future together, it's a good sign they're committed: "If he's serious about you, he won't be afraid to talk about where things might be headed."

What he talks about depends on where you are in your relationship, says Preece. "If it's early, he might want to plan a holiday together. Or if you've been together a while, he might naturally want to make sure you are on the same page about marriage, kids and exactly what you are looking," he says. "Then he'll plan towards that."

A person who is committed to you will display these behaviors even if the two of you haven't fully discussed your commitment yet. If they do, and you feel that way about them, too, the "what are we" talk might not be too far off!

This article was originally published on July 19, 2017