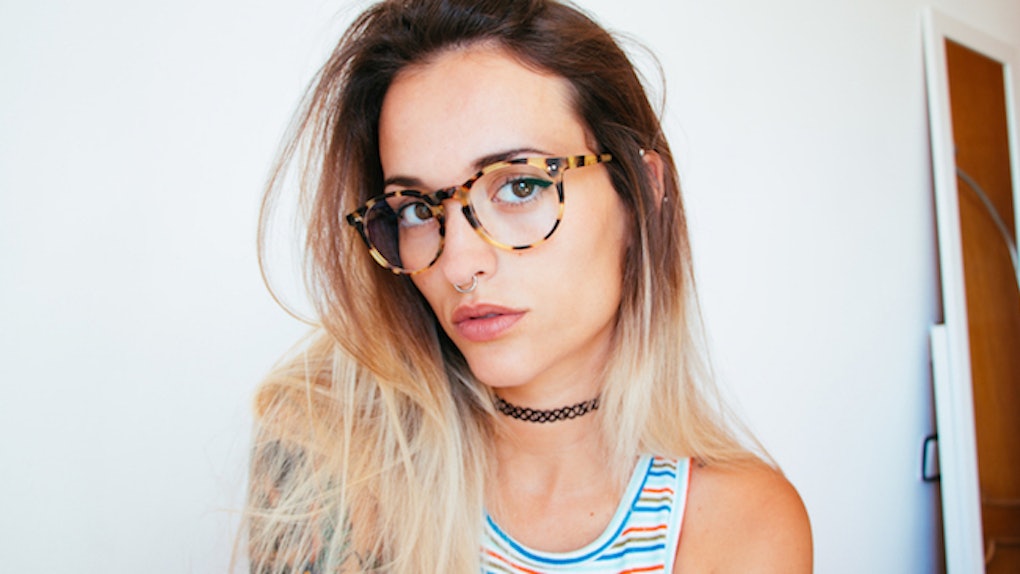 The Identity Crisis Of Being A Lesbian Who Hates Sports

I was a lowly sixth grader and the object of my obsession, Cleo*, was a wildly popular eighth grader. I spent my days admiring her from afar, but cool Cleo was in no way aware of my meaningless middle school existence.

Understandably, of course. I was a pimply 12-year-old brunette traipsing down the hallways in hideous high-heeled Sketchers. Cleo was the notorious 14-year-old basketball star of our preppy middle school in the suburbs of Fairfield County, Connecticut.

You could find her lurking around the soccer field after school, her kneecaps scraped raw, her body adorned in a layer of sweat; a smattering of lush East Coast mud tarnishing her oversized jersey; a dumb, blissful smile stretched across her foundation-free face. Her untouched, wild beach waves were always recklessly spilling out of her messy top-knot.

Meanwhile, I religiously flat ironed my hair to a crisp and feverishly devoured my mother's Vogue magazines, studying each glossy page with a panicked intensity. I memorized articles about the great fashion icons like they were Biblical verses. I ferociously worshiped at the altar of Juicy Couture tube tops and silver Tiffany I.D. bracelets.

Even though I was fascinated by Cleo, I didn't want to be Cleo. I wanted to be Jessica with the honey-colored highlights and the real diamond stud in her pierced nose. (My mother wouldn't even let me pierce my ears!)  I wanted to ~kiss~ Cleo. I used to daydream about her athletic body pressed against my scrawny body in math class. Probably why I failed so many pop quizzes.

Obviously, I didn't tell anyone about my all-consuming crush on Cleo. Girl-on-girl crushes were not cool in 2002.

So instead of gushing about Cleo, I continued to flat iron my hair to a crisp. I would crank up the heat on my cheap, drug store flat iron until it reached the highest possible setting, and would go over each curl until the bathroom reeked of burnt virgin hair.

I was doing whatever I could to "straighten out" the kinks, I guess. It's still suffering from the ramifications, 17 years later.

(PSA: Don't screw up your gorgeous textured hair with flat irons, girls. It will get upset that you're trying to change it, and it will never grow in the same again. Same with your eyebrows. Don't mess with your hair and don't mess with your brows; let them run wild. Because the long-term damage is real, and even the most expensive hair supplement to ever grace the beauty market will be unable repair what you've broken. It's a metaphor for life. If you don't embrace your authentic self, no amount of therapy and happy pills will piece your betrayed soul back together.)

The summer between eighth and ninth grade, I heard a rumor about Cleo. My friend's older brother claimed he had "walked in" on her at a house party getting down and dirty with a sporty field hockey star. I was ferociously jealous and tingling with excitement at once.

Maybe I had a chance. Maybe my crush on her had been so overwhelming because I instinctively knew she was attracted to girls.

“Duh, of course, she's a dyke. She's the captain of the softball team and the basketball team. All lesbians love sports. It's in their DNA,” I overheard my friend's older brother gossip to his buddies as they passed a joint around her fenced-in backyard.

My ears perked up. My mouth felt as dry as the Vegas desert with a hangover.

I was 14 and tortured over my sexuality. And now, I learned that being a lesbian was synonymous with being athletic.

My heart dropped into my chest. I was many things. Talkative. Oversensitive. Obsessed with Wet n Wild Black Kohl eyeliner. But holy shit, I was not an athlete.

And up until that point, I didn't care about my lack of athletic prowess. Who cared about sports when I could take the train into the city and stand in line in the freezing cold Manhattan for three hours to see RENT on Broadway for the 25th time?

But in that moment, I was freaked out.

I was nothing like Cleo! I was nothing like the sporty field hockey player with the muscular thighs and the outdoor tan she had (allegedly) hooked up with, either! These girls were the only examples of (possible) real life lesbians I'd ever witnessed in the sheltered suburb I called home. And I couldn't have been more different than either one of them. I was pale. I was into theatre! I was a fashion magazine-toting waif with a budding eating disorder.

Was the wild attraction toward girls that had been burning inside of me somehow not valid because I detested sports? Was it all a great mix-up? Was I straight and merely sexually confused?

I was haunted by the words of the stoned high school boys in the fenced in yard. All lesbians love sports. It's in their DNA. It replayed in my tween brain like a dark mantra.

I had to find out for myself.

It was the early 2000s, and the internet had just started to kick off. There was no social media. Dial-up internet was so slow that I could tack 16 Ramones posters to my bedroom wall before I was connected.

And guess what? Hand on heart, the girls on the forum were in the throes of organizing a friendly lesbian soccer league in New Haven, Connecticut.

My only experience with soccer was in my early childhood, when I'd signed up to play one summer because I thought the yellow knee socks were cute and the cleats were sort of like heels. I quit after my first game, but spent the summer prancing around my room to Madonna in the cute knee socks and the cool cleats.

How could I possibly be a lesbian? Even on the world wide web, the lesbians were athletically inclined.

And then came the great tidal wave of pop culture jokes about lesbians. Sketch comedy shows told me that all lesbians loved softball. Comedians incessantly made fun of lesbians for their short hair and tendency to move in after the second date.

On the rare event that a lesbian character was featured in a movie, rarely was she stylish. And if she was stylish, like the lesbian in the 1997 cult classic "Chasing Amy," she ended up dating a dude in the end.

As a fashion-crazed teen with elbow length hair, I couldn't relate to any of it.

But I knew the way I felt about women.

And the older I got, the harder the feelings were to ignore. My feelings screamed louder than the media, the sketch comedy shows, and the kids in my high school.

I began to realize that maybe they had it all wrong! Maybe being a lesbian simply meant you lusted after women.

So I toned down my femininity and even pretended to care about sports for a moment. I worried people would question the authenticity of my sexuality if I were to reveal myself as the femme, lipstick-wearing, hyper-sexual, sports-loathing lesbian that I am.

Because whether or not a person is passionate about sports or Lady Gaga or vegan food or CrossFit doesn't say anything about who that person really is.

And yes, being a lesbian who openly favors vintage Chanel clutches over Sunday night football can elicit the occasional eye-roll. I get told that I don't “seem gay” approximately 300 times per year.

The reality is, the “sporty lesbian” is a trope. And tropes are damaging because they reduce multi-faceted people into just one thing. Tropes throw a blanket over an entire culture of people who have something in common. Their sexual identity. The color of their hair. Their race. Their body type.

The lesbian who wears snapbacks and is sports obsessed is a typical lesbian trope. Just like the dumb blonde is a typical girl trope.

So naturally, if you're a hyper-intelligent girl who loves her platinum-colored hair, but has been repeatedly told by society that blondes are vacuous idiots, it's likely you'll experience an identity crisis of sorts. Maybe you'll even consider dying your beloved blonde hair dark brown so your looks are cohesive to your brain. Or maybe you'll water down your brilliance and play the part that was given to you.

I get it. Because I too, was conflicted by the lesbian role I was haphazardly cast in. I feared that maybe there wasn't even a part in the script for me at all.

But it no longer makes me consider watering down my love of all things GLAM in order to fit into some lesbian box. The box, after all, was created by people with such debilitating fears of the unknown that any entity who appears to be "different" needs to be organized into a stifling series of sweeping generalizations.

I no longer have an identity crisis about being a lesbian who hates sports. Because at the end of the day, I'm in love, love, love, love with the taste of vagina. And in my book, that makes me a surefire dyke, baby.