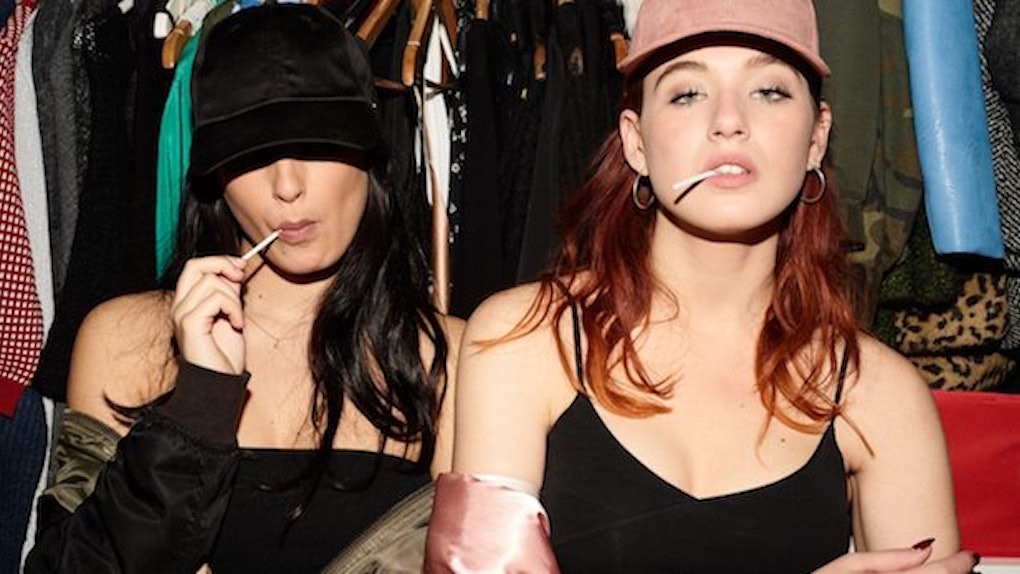 Lesbians are often divided into two (very dated and overly-simplistic) categories: “femme” and “butch.” Since the moment I came bounding out that dark, repressive closet, the jury quickly charged me with being a "femme."

“Oh my God, you're such a FEMME!” seasoned lesbians would roar at me as I nervously sat in the corner of the lesbian bar alone in my high heels. Was I deemed a “femme” because of the high heels? Or was it my impeccably polished pink nails? Or the oxblood red lipstick and the mountain of mascara caked to my long, fluffy eyelashes? All of the above?

As I grew more comfortable in the scene, I began to recoil at the word "femme." “I'm NOT A FEMME!” I would yell as if being a femme lesbian were a terrible, taboo thing to be. I was so dramatically averse to being considered a “femme” because I didn't want to be considered dumb. I wanted to be taken seriously, damn it.

So why did I think "femme" was synonymous with being a brainless joke? Oh, because I, like so many girls, had a lifetime of internalized sexism stewing inside of me.

See, we lesbians came of age in the same misogynistic society as everyone else. We were spoon-fed the same sexist narrative as our heterosexual classmates. Our sexual orientation didn't protect us from the notion that femininity equals weakness. Meekness. Superficiality. Stupidity.

For a moment, I even considered dialing back on my signature smokey eyes, the glitter-infused Urban Decay eyeliner and the waist-length hair that made me feel both sultry and safe at once (two positive feelings I happen to wildly enjoy).

And now, I fall to my knees and thank my higher power, Lana Del Rey, that I didn't ever change. I couldn't change; my inherent desire to dress up spoke louder than my desire to fit in.

Dressing like a pop singer every day brings me joy. And to deprive yourself of feeling joy because you're afraid that certain women in your community will undermine your intelligence? Well, honey. That's letting the patriarchy win. And I'm trying really hard to not let the patriarchy win.

Now, I own the word “femme” like I own the words “dyke” and “slut.” I think being hyper-feminine is awesome, and if you want to make assumptions about my character based on my personal style, I don't care to rub elbows with you anyway.

It took me awhile to get here. But I'm finally here and it's so much better on this side. The side of self-acceptance is so much sweeter than the side of conformity — despite the sweeping generalizations and crazy misconceptions that constantly swing your way when you let your femme flag fly.

Here are some of those generalizations and misconceptions that I, as a "femme" lesbian, have been subject to:

“I wasn't sure I could date you when I first met you! I mean, I was attracted to you, but you really freaked me out," a woman wearing a $400 Theory blazer confessed to me after her third Grey Goose Martini.

She tugged at her silver Rolex. “I thought you were a high maintenance snob.”

“Why?” I asked once again as I slugged back my $6 house wine. I was wearing a $15 Forever 21 minidress, wishing we had gone somewhere less expensive because I only had $150 to my name.

“Well... I don't know. The way you dress!” She laughed like she had drawn the most obvious conclusion in the world. Meanwhile, I was baffled.

Let's do the math here: The intimidatingly brazen woman in the designer blazer who insisted on only drinking the top shelf vodka, who also happened to be sporting a watch the same price as a down payment on a house, was saying she thought me, the smiley 20-year-old in the cheap dress clumsily sipping her cheap wine, was a high maintenance snob?

I can't tell you how shocked my ex-girlfriend was to learn how fired up I get about politics when we first started dating.

“I just didn't think you would be so radical!” she squealed as I dived into a deep debate with a bartender about abortion.

The authenticity of my sexuality has been questioned since the moment I stepped out of the closet. A girl in college was afraid to date me because she didn't want to get her heart broken by a girl clearly going through a “phase.”

Look, honey, not to get too graphic or anything, but if you have sex with women, you're queer AF. Style and sexuality are two VERY different things.

I wasn't lying when I said I fiercely love fashion, baby. I've been throwing on dresses and slapping on lipstick for so many years; I have this whole "getting ready" routine down to a science.

My full hair and makeup are complete before you've even finished blow-drying your side bangs.

5. I make money simply by batting my lashes and “blogging.”

I don't where the rumor comes from, but somehow it's circulated that girly girls don't have a work ethic. When really, in my experience, girly girls tend to have an insanely impressive work ethic, one that exceeds all genders and stereotypes.

Do you know much hustle is required in order to be taken seriously in the workplace when your feet are strapped into platform, patent leather Mary Jane shoes?

“I've never experienced discrimination because of my gender in the workplace,” a more masculine-presenting female friend of mine once revealed over a confessional glass of wine.

“Well, yeah, that's because you look amazing in pantsuits and talk sports with the boys," I blurted.

My friend paused for a minute. “You're right,” she thoughtfully responded. “I get treated like one of the guys. When I think about it, they treat the girls in dresses like bimbos."

“I don't know. I just thought you, like, blogged!” a date once said to me when I explained to her that I spent the day studying analytics, editing longform articles and brushing up on my SEO knowledge. "I didn't know you worked so hard."

“If only,” I muttered, thinking about the gruesome hours it takes to write a well-written viral article, plus the hours of coaching yourself to not be crushed and terrified by the sexist cyberbullies who write you lovely private messages like "I hope you get raped and die," only to be paid significantly less than your male counterparts for the same job, but who, of course, don't deal with a fraction of the daily harassment and abuse from internet trolls.

It's not just my world, either. When I go the lesbian bar with other girls adorned in frilly dresses, there tends to be a collective shock when the femmes say they're CEOs, doctors and lawyers. I can see it on people's faces: Woah, you're high femme AND a criminal lawyer. As if one has anything to do with the other.

So, listen up. I LOVE being a lesbian. I love my community. I gaze into the mirror every single day and thank my higher power (Lana Del Rey) for making me gay. Most queer women are open and accepting. But that doesn't mean we're safe from the insulting tropes about feminine women.

And it really just goes to show that no matter what scene you're in, whom you're attracted to, or how marginalized of a community you are, femininity is still all too often seen as less powerful, less monied, and less intelligent than masculinity.

And that's got to change because that rhetoric isn't only tired; it's toxic. It's damaging. It's reductive! It's exhausting.

My point? You can wear all the crop tops in the world, you can paint your lips in the hottest shade of PINK lipstick ever created, and still be an ambitious boss who pays her own way in this world. Loving pretty things doesn't mean you're not putting in hours of grueling work.

After all, my collection of Kat Von D Everlasting Liquid Lipstick doesn't pay for itself. I've worked for my cherished collection of cruelty-free designer lipsticks. Hard.