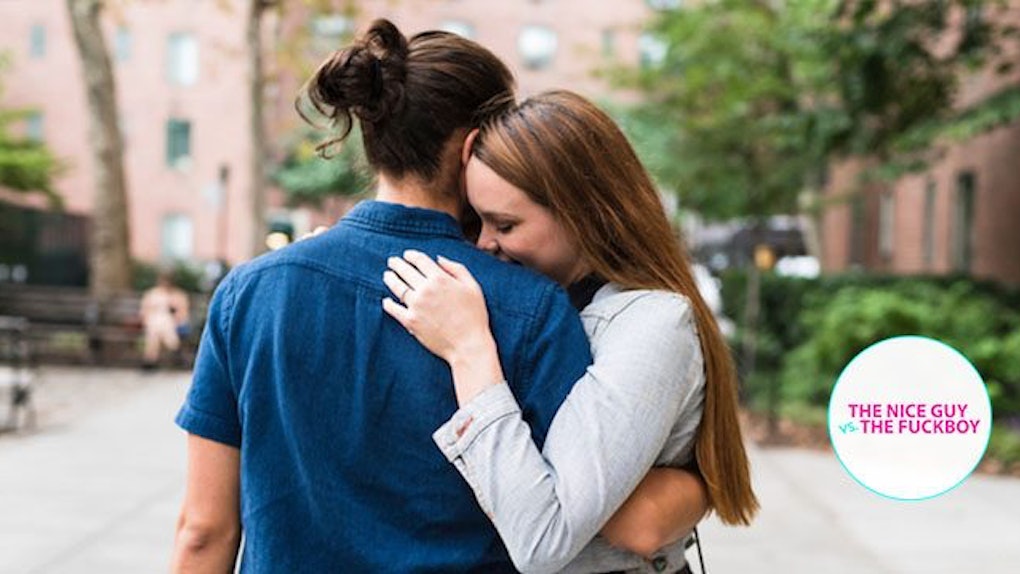 Nice Guy And F*ckboy Reveal How To Be Girlfriend Material

My name is Anya. I'm 24 years old and just can't seem to get away from being viewed as "just a body."

I've been single for nearly three years now and tried nearly every dating platform under the sun, but I either meet people I have zero interest in (I accept almost every date in hopes I'd maybe change my mind), or the ones I am interested in aren't necessarily "interested in me."

I decided to swallow my pride and try something different: I messaged a person from work that I had a crush on for months on social media. We didn't have very many interactions with each other. He's nearly a decade older, and I don't see him that much since he isn't a full time employee.

I'll skip some of the details to get to the point...

Pro: He's expressed interest in me.

Con: He says he has a girlfriend, but that clearly isn't stopping him. He says his relationship isn't serious, and that he also isn't interested in a serious relationship at all.

My problem is this: Why can't I find someone who actually wants to get to know me instead of "getting to know me?"

In the grand scheme of things, I'd like to think I'm pretty modest in not only how I dress, but how I carry myself (I'm not one to curse or make/laugh at dirty jokes; maybe a slight smirk, but not much else).

Other people see me as intelligent, kind and attractive (or so they say; I don't know if it's just to make me feel better), but I just don't see why I can't be enough? Why do so many guys I come across with can't seem to look past the physical?

Your current problem was my best-case scenario at your age.

You see, I was the guy who would hit on a girl, believing that I was doing a fantastic job at the time, and then be told the sobering details of her current love affair with a guy she actually liked.

Regardless of my own devastation with the circumstance at hand, I'd give her the best advice I could, which, considering the regularity with which this happened, helped prepare me for this column.

I was always "the friend," but never the tempting stud a woman wanted inside her for a night of drunken debauchery and forgettable sex. I was Seth when I wanted to be Ryan.

Sure, it sucked, but it eventually led me to my fiancée, who readers know that I gush about her at every given opportunity.

The more confidence you show a man, the more of a catch he'll think you are.

But first and foremost, let me inform you that you need to get rid of the dude in his thirties who's emotionally cheating with you at work. I also want to note that, if you knew he had a girlfriend when you pursued him, shame on you!

This suggestive propensity you have for committed men could be the reason why you're consistently wanted “for your body.” I mean, what does a man want when he's already committed? It's certainly not commitment.

If you think this inclination to cheat will change if he moves onto you (he won't, FYI), you're kidding yourself.

So let's just start with a blank canvas. Since I get the feeling that you're longing for a special sort of commitment that exceeds a single night, let me give you some pointers that'll groom you to become “girlfriend material":

1. Delete any and all dating apps. The guys on there want sex. It's very rare that they're looking for love. I know that the attention these guys offer is nice and all, but does it really outweigh the bullshit and dick pics? Probably not.

2. Hang out with his friends. A guy LOVES it when he see's a potential girlfriend hanging out with his boys. And if his boys approve, you're pretty much a shoe-in — trust me on this.

3. Don't have sex with him. Duh. If you don't want a man to see you as "just a body," don't show him your body when he asks you up to his place. If a man pursues you for sex and you don't give it to him, he'll be gone before you know it. If he sticks around, then maybe you've found yourself a (potential) keeper.

4. Keep the conversation away from sex. When a guy wants to get laid, he uses sexual innuendo ad nauseum. He also brings up the topic whenever he can. So the next time a guy talks sex, change the subject. Not in an obvious way, but acknowledge that he mentioned it and move on. This way, he'll know it's still too early to breach the topic.

5. Look for a guy in his late twenties. From 20 to 25, I was all about the party and my career. I didn't have time for a relationship, so I wasn't looking for one. But after a few of my closest buddies got married, me and my single friends all had the revelation that we should probably grow up a bit. Now at 27, all of us are in long-term relationships. This isn't happenstance.

6. Be more confident. The more confidence you show a man, the more of a catch he'll think you are. And the more of a catch he thinks you are, the more he'll feel like he can't afford to lose you. Confidence isn't just about speaking highly of yourself, either; it should instead shine through when you don't follow up with his texts the minute they're sent or jump to conclusions when he's done the same.

7. Opt for an exciting date. A date with dinner and drinks is nice, but it's forgettable. When the next guy takes you out, suggest you do something different and exciting. Hit up an amusement park, or if you want to eat, opt for something more interactive like Hibachi or Korean BBQ. When he begins to associate these fun experiences with you, he'll begin to see you as a formidable mate, not "just a body."

I think the case, in your instance, isn't that you're putting out a blatant “fuck me” vibe, but that you're not loud enough in the “I'm more than a body” aspect. But I'm confident that these pointers I've offered will help in your pursuit of a more genuine connection.

Because men are inherently visual, physical beings and asking us to get past the physicality of a woman is kind of like telling a dog not to fetch. You're likely going to have to find your man through the process of elimination — weed out the duds, if you will.

But you've got this, Anya. Just do me a solid: Stay away from dudes who are already in committed relationships.

In my experience, it's very difficult to switch how you think about someone you only want a physical relationship with.

It works the opposite way, too. I don't expect the women I'm involved in sex-only relationships with to wake up one morning wanting more from me, either.

It becomes kind of an agreed-upon arrangement. And a symbiotic one at that two parties understanding the other isn't looking for anything emotional.

Guys typically won't change how they feel about these women. But, that doesn't mean we feel the same way about all women.

That's definitely a misconception being perpetrated more and more these days: You meet a certain number of guys who only want one thing from you, and you make the dangerous assumption that that's all we want.

Let me reaffirm your quickly fading optimism in my gender: There are tons of men who aren't comfortable with sex-only relationships and are actively seeking emotional ones. They may be the type you're looking for, but it doesn't sound like they're the type you're targeting.

Typically, corporate mercenaries in their mid-30s who already have girlfriends don't fall into this category.

That said, there are definitely traits we recognize as attributes we're looking for in women we want sex-only relationships with. This includes women we maybe find attractive but don't get along with, women we consider convenient and women we consider to be promiscuous.

The short answer is: You need to find a guy who needs you more than you need him.

We tend to make these decisions quickly after meeting someone, which may not be right, but it's something we chalk up to instincts.

Basically, most men have some sort of person-specific definition of what it means to be “girlfriend material.” And it sounds like you want to know how to get guys to see you like that. So how do you do it?

The short answer is: You need to find a guy who needs you more than you need him.

The long answer is a bit more complicated.

Do what good girlfriends do well. Once you find this guy:

1. Be direct, not passive-aggressive.

2. Laugh at his jokes and with his flaws.

3. Introduce him to your friends.

5. Have outside ambitions and hobbies.

6. Take interest in his family.

8. Give him space occasionally.

Do all this stuff early — even if it seems too soon — as a way of making your intentions clear.

On the flip side, if you really want to be a girlfriend, you have to open yourself to the negative things girlfriends do. What do girlfriends do that guys hate, but put up with anyway?

Maybe don't try all those things at the same time, but if you show that you're capable of mixing in a few, it could trigger something physiologically in the men you date.

3. Tell him he drinks too much.

4. Take forever to get ready.

10. Call and text excessively when you know he's in a meeting to vent about a trivial matter.

I'm just spit-balling here. But what I'm saying is try to get out of your comfort zone — your routine — because your routine doesn't seem to be matching your goals or intentions.

This might seem like it runs adverse to all your instincts, but maybe that's the point. Maybe what your instincts tell you to do is what's giving off an unserious aura. Maybe you're giving off the image of someone you don't want to be.

I'm not saying you should have to do this, but I'm not naïve enough to hide from the reality that there are some guys who need to be shown.

I usually tell people not to turn down any dates, not to let any opportunity pass you by, because you never know. But maybe if you want to stop being treated like a girl who says yes to everybody, maybe you should stop saying yes to everybody.