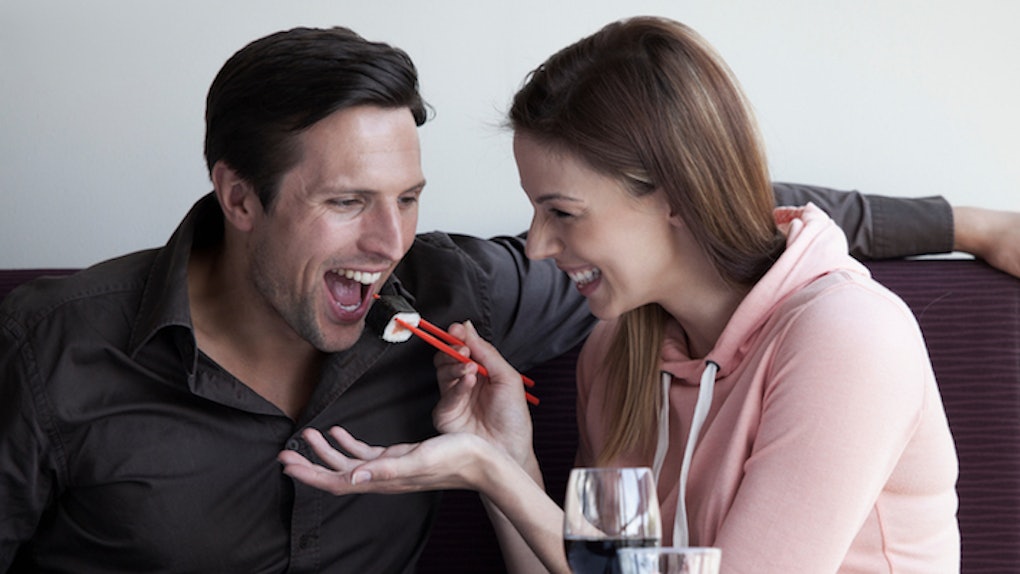 If These 5 Things Don't Happen During A Date, He's Probably Not Right For You

Dating, especially, in 2016 is not the most enjoyable task.  I once thought I was on the verge of carpel tunnel from 20 minutes of swiping left.

Once in a while, though, you stumble upon a worthy profile.  After some breezy text repartee, you may find yourself on a real, adult date.

*Cue overanalyzing every little detail, from if your lacy top is "trying too hard" to whether you should risk sampling his whisky when he offers, even though you know one sniff will make you gag.*

You don't want to seem high maintenance and drive away the one guy who didn't put "$$$" as his bio, right?

Well, put your worries aside. Here are five ways to know if your first date will turn into a second:

1. You didn't meet on a Craigslist ad.

OK, this one might seem obvious, but it's important to make sure that your courtship doesn't begin by resembling a Lifetime movie.

Of course, you want some face time to make sure you don't have to call Nev and Max ("Catfish") in on the case, but make sure you choose a very public location.

If he suggests a bar, look it up and make sure it's a popular one that will have a good crowd of people. Tell your friends where and when you'll be going.  Staying safe is the first step to making sure you reach date number two.

This is not instruction for you to arrive late.  Tardiness is not cool; it's rude.

So, when you arrive on time like a respectful human and find that he's already sitting at the bar waiting for you, that's a good sign that he's genuinely interested in you. He's not just fitting you in between other dates or whatever he's busy with.

He took the time to make sure that he would be there upon your arrival, which means he respects your time and your schedule. Also, he saved you from being the one waiting nervously before the other arrives. Who said chivalry was dead? Someone who does this is a true #gentleman.

Tardiness is not cool; it's rude.

3. Awkward silences aren't the theme of the evening.

Some nervousness early on in the night is natural. A long pause that's broken with that awkward screech/giggle you were trying to conceal might be just the ice breaker you needed.

If the rest of the date is filled with easy conversation, there's a good chance you won't want this to be a one-time deal.

But a date that's filled with awkward pauses, the feeling of not being able to speak comfortably and just straight-up blank thoughts is more than likely to not result in a second one.

Actually, save yourself the trouble and use Chelsea Handler's Gotta Go! app to get out of the date early. You'll be happy you did.

4. Chemistry: the kind you don't have to study for.

I don't have to get creative for this one. You know the signs: He "accidentally" brushes against your leg, you flip your hair, which happens to give him a whiff of your perfume.

If you feel a connection and he does too, there will be a second date.

5. You learn from each other.

It's always a good sign when you leave date number one excited to check out the podcast he mentioned, or he, in turn, looks up exactly what you meant when you were raving about the Chicago Cubs' historic season.

Of course, it's nice to have some things in common with your date, but you also don't want to wind up dating your clone. Finding someone who's interested in things different than what you're interested in is exciting. An intelligent guy who can match your own wit is a prime find, like the Jim to your Pam.

Stop the worrying, and start embracing the fun of dating because date number two is ready and waiting.