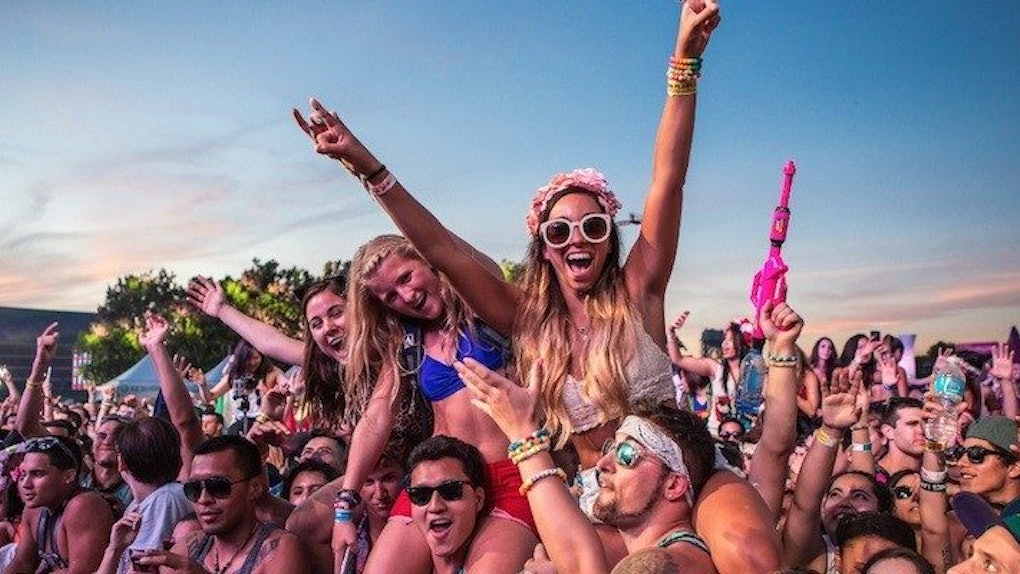 The Emotional Roller Coaster Of Having A Music Festival Romance

Before I moved back to the freezing cold, bitter, exorbitantly expensive, wildly diverse city of New York, I lived in Southern California. Sunny, palm-tree-adorned, beauteous Los Angeles, California, to be exact.

Sometimes I don't know why I left my spacious $800 per month bedroom in the glass house in the Hills overlooking the hopeful Hollywood sign for a six-story walkup apartment with a broken shower for double the money on 92nd street.

I guess I just enjoy the misery, babe. I am British, after all. And no one likes to suffer like us Brits.

I was in my late teens/early 20s in my LA stint, and I played the California Girl role pretty well for an alabaster-skinned, raven-haired, native Manhattanite.

It wasn't Coachella and it wasn't Bonnaroo without a bit of the ole' ~festival romance~.

I mean, think about it: You're young, you're wearing fringe (before it became so embarrassingly cliché and Forever21 had a festival line), you haven't bathed, you're high as a kite, you're in musical bliss... of course you're going to fall madly in love. You're in such a heightened state of happiness (at least until the mushrooms turn on you) that, to be perfectly honest, you could fall in love with a rotting tree.

Yes, you're not exactly grounded in reality when you're experiencing heatstroke while crying booze-filled tears as your favorite band plays and looking for your friends in a teeming sea of thousands of people rolling on ecstasy, not quite sure if you're having the best time of your life or if you just WANT TO GO HOME ALREADY.

That's what they don't tell you about music festivals, kittens. It's an emotional roller coaster of highs and lows. There is nothing more raw than being covered in mud and dangerously dehydrated while listening to your favorite song in the world LIVE. If that's not a triggering combination, I don't know what is.

So, when you're in this rare form, your festival romance is going to be quite an epic journey. One for the memoir, one for the grandkids.

Here are the seven emotional phases of The Festival Romance:

It's a few hours into the festival when you decide you just can't hold it anymore. "I'll be right back, I'm going to the bathroom," you boozily slur to your friends. "Stay right here."

You go the bathroom (a traumatic experience), relieved that you got THAT out of the way. You remove your round, '70s style mega sunnies and peer into the crowd. The sun is setting.

Your friends are nowhere to be seen. Fear suddenly snakes its way around your naked waist (you're in a crop top).

Holy shit, you think to yourself as panic washes over you. I'm alone.

Phase 2: Locking of the eyes.

You're high, you're paranoid, and you're weaving your way through a sweaty cesspool of 20-somethings tripping their faces off.

Suddenly, you feel too young and too inexperienced to be at a music festival. The twinkling lights that seemed so artistic and creative when you first arrived suddenly look too vivid and a little evil. You reach into your suede beaded bag. Your phone is dead. You've never been more alone in this cruel, cold world.

Just as you're about to curl up beneath the palm tree and cry mascara tears, you lock eyes with another human being.

As you gaze into the pale gray eyes of this beautiful boy creature, you begin to feel things. He approaches you.

"I'm fuckboy, what's your name?" the boy says, stretching out his bony hand. He's a shirtless vision in shorts and no shoes. His beard is ethereal. You're intoxicated. He is the most beautiful thing your eyes have ever seen.

And BAM. CRASH. BOOM. FIREWORKS. You're in love.

Phase 4: Soulmates who have finally found one another.

The next thing you know, you and fuckboy are passionately kissing, rolling around in the cool grass as the West Coast sun becomes the moon.

Some really amazing instrumental band, like Sigur Ross, is playing. You feel at one with the music and the kissing and the earth, man. Suddenly, everything makes sense! Fuckboy is your soulmate, and after your whirlwind festival romance, the two of you will ride off into the sunset, buy a house outside of San Francisco, and live happily ever after.

He will blow glass for a living and you'll start an organic cereal company or something. And you'll have gorgeous little children who will run free around your Northern California backyard. You won't be rich, but you'll be super happy and full of love. Oh, the music is so beautiful, and oh, life is so beautiful and oh, TO BE YOUNG AND IN LOVE.

Fuckboy excuses himself to the bathroom. "Stay right here, I'll come back to you," he says while grabbing onto your shoulders for dear life like he's about to go to war. He looks like a knight in shining armor from the old Disney movies.

"OK," you purr, gazing into his soulful eyes. You're full of trust and lust, a dangerous combination.

And suddenly, it's been two hours and you're still waiting for him. It's starting to rain, and oh shit, what did you do with your suede beaded bag? And where are your $200 moccasins?

Holy shit, you think to yourself for the second time in 24 hours. I'm alone.

You wrestle through the crowd, determined to find your MAN. You feel a pit in the depths of your stomach, your girl instincts are telling you HE'S NOT OK AND NEEDS YOUR HELP (really, that feeling is just hunger, girl. When was the last time you ate? What did I tell you about the importance of partying with food?).

But hell hath no fury like a woman on a mission to find her man.

That's when, ever so suddenly, you do see Fuckboy. Your keen eyes take him in as you watch him passionately making out with a girl in nothing but a cable knit bikini top and distressed denim shorts so short, they might as well be denim UNDERWEAR. His hands are entangled in her bright red mane. Her tanned leg is nestled between his hairy legs.

Your eyes fill with tears. You feel warm water slowly dripping down your face. Your heart feels like it has heavy weights attached to it. In fact, the weights are so heavy that your heart snaps in half.

And your sweet heart is broken.

The light rainfall suddenly turns into a thunderstorm. Thick wet drops feel like pelts against your bare skin. You feel yourself start to sober up, sort of like the time a cop raided your house party in high school. You were high as a kite, but the moment you saw the lights flashing in your driveway, you were crystal clear.

You look at fuckboy and realize his skin is deeply pockmarked. His beard isn't ethereal, it's long and dirty. You imagine bugs nesting inside of it.

He's got pimples on his back. He's wearing a PUCA SHELL necklace. In fact, he's not even cute, he's hideous. You're hit with a case of sudden repulsion syndrome.

Suddenly, you start laughing. And the laughter quickly becomes hysterical. You realize you never fell in love.

No, girl. You just smoked some really good weed and now that the high is worn off, you're finally in the right headspace to find your friends. You can't wait to tell them about how you briefly fell in love with an oily-skinned fuckboy because you were so deliriously wasted.

Only, by the time you get to them, you will be high and in love again and the cycle will repeat itself. Because it's not a music festival unless you fall in love with a fuckboy at least three times.