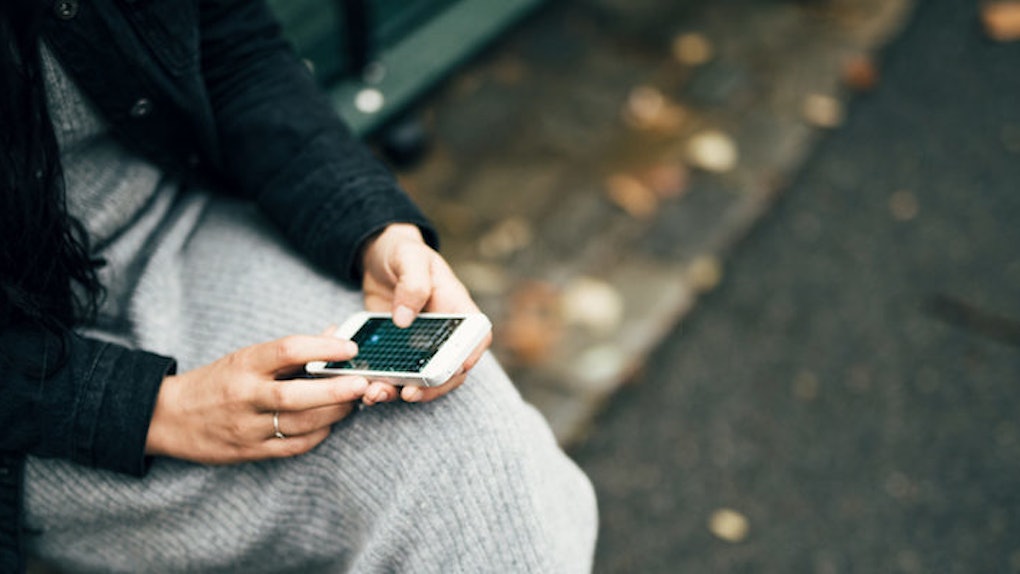 Why You Should Stop Being So Offended By Benching

A friend sent me a hilarious article about dating the other day, which is how I'm sure many of you could start an essay after reading one of my articles.

It wasn't hilarious in the purposeful sense, like a pre-sellout Adam Sandler or kids on YouTube falling down. It was hilarious for its tactlessness, for its perceived but way-off-base cleverness, for its oh-so-of-the-moment need to label and compartmentalize.

The article, from New York Magazine, talked about “benching,” which it went on to describe as a dating trend almost as novel and insidious as the Zika virus. Benching is “passive ghosting” or, as Elite Daily's Erica Gordon put it, “a new term for a dating problem of which we're already familiar.” When you have someone's number but only text them sporadically, they're on the bench, sitting there and waiting for their number to be called in the most impractical game of dating dodgeball ever.

I find it kind of funny that men are being colored as these all-powerful coaches and women as these sad little third-graders with high, dorky socks who just want to get in the game. I also find it funny that not texting every single person of the opposite sex you know all the time has a name. I thought it was just called “dating.” Or “normal.” Or “life.” Maybe it's just my life, but that's all I have to go on.

Look, I'm one of the least busy people you will ever meet. My job allows me to sleep until noon, work from the beach if necessary and encourages liquid dinners. Sometimes I write these columns because I like to, but only after six beers minimum. The office doesn't keep me from 8 am to midnight and I have no hobbies. I'm so disinterested in being interested in anything it's actually not interesting.

And even for someone like me, benching seems pretty reasonable and not nearly as malicious as people are making it out to be. Do I have a rotation of girls I'm talking to at any given time? Yes. But just because I'm not talking to each of them every day doesn't mean I'm saving them for later or something, like pieces of fucking leftover lasagna.

Maybe I just don't see the need to be so goddamn connected to everyone at every given moment, maybe I enjoy my moments of solitude and consider them valuable, maybe I am comfortable enough with being me that I can be alone with my thoughts for x hours out of the day.

We treat everything today -- our emails, our families, our cars, our health -- with this “we'll get to it later” mentality that's pervasive but isn't exactly insidious anymore. So why shouldn't we do the same with our relationships? Why shouldn't this be the way we treat people? If we expect things to go this way, it's really not that bad when they do.

Benching isn't malicious. Half the time it's subconscious. Almost always it's practical. It's merciful. And it's usually happening on both ends. Maybe there just isn't enough to talk about with every person for every second of the day. Maybe things are actually better when you reconnect with someone after a break.

A quick word to girls who are upset about benching: Grow up. Please, grow up. Don't you work? How often do you text every member of your family? I bet it's not every minute of every day. You go a few days without hitting up your siblings. You still love them, don't you?

And you know what, the thing is, I don't even have to love you. Now that I think about it, screw you for assuming that I do. What a sense of entitlement. I don't have to text you every day just because I have your number and you don't have to text back at all. It's a little insulting actually for you to take this position. Just because you have the bare minimum qualifications for “being in my life” doesn't mean you 1) have to always be in it and 2) have to take precedent.

This is extremely hypocritical of you and harshly unfair. I can put my career, my family, my preferences after texting a relative stranger. My life, the one you're barely a part of at this point, should take precedent. As should yours.

Bench me, I understand. I'm an adult. I assume you have other things going on. Hell, we just met on Thursday. Or we've been on three dates. If you wanted to see a damn movie but had four days of meetings, I would expect you to text me after those were over and say, “Hey, I'm finally free. Wanna see a movie?”

Isn't the whole point of dating to separate yourself from the fray? To extend beyond the masses and appear irresistible and superior to a certain person? So they can't live without you? So you win?

Then do that. Be better. Separate yourself instead of being salty that there is no consolation prize or that the participation trophy in this stupid, perpetual dodgeball game is really a low, indirect rejection courtesy of smartphone technology. But please stop hating the player because of it.

It's 2016. We're young. Don't act like you're not texting four different people, too.