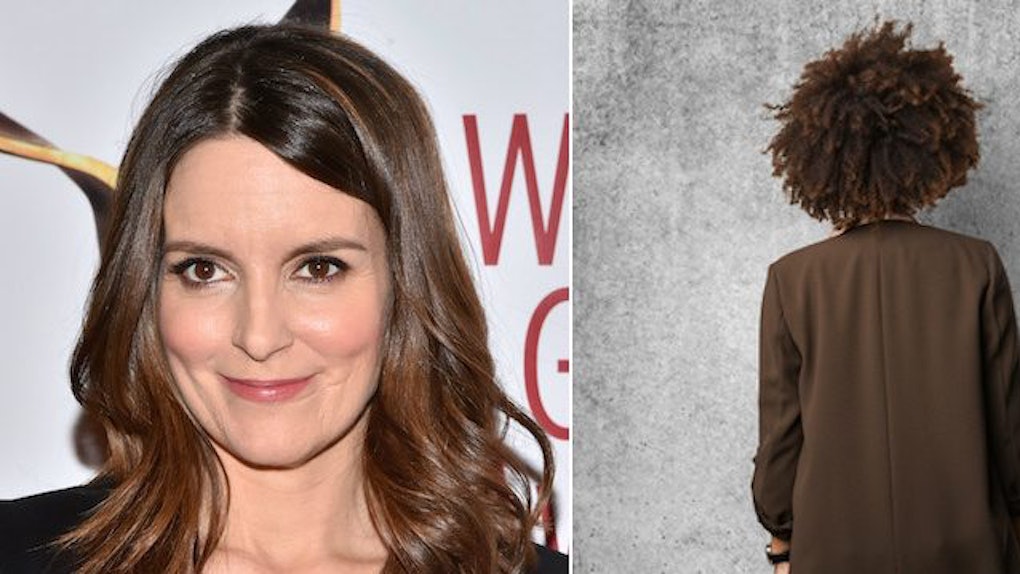 What Black Women Need From Feminism

She confronted them for turning a blind eye to the mess his administration may create for women, people of color and other marginalized groups.

A lot of this election was turned by white, college-educated women who now would maybe like to forget about this election and go back to watching HGTV, and I would want to urge them to, like — you can't look away. 'Cause it doesn't affect you this minute, but it's gonna effect you eventually. Again, open two windows. Do watch HGTV but… [don't] hide, to not turn our attention away from what is happening.

Sounds good, Tina, except for this one not-so-small thing:

Encouraging white women to take a stand against injustice because it will affect them is a selfish act that basically says they should only be concerned about their well-being. White women should not tune into the political climate of this country just to make sure white women are taken care of.

In fact, this rhetoric has contaminated the very core of feminism, and causes many black women and other women of color to reject the mainstream idea of the concept that is supposed to be liberating for all women.

Here are a few things black women need from feminism in order for us to feel comfortable about fighting for "equal rights" beside white women.

1. Start speaking out more about what happens to us.

Sure, it's "just social media," but social media has long been considered a tool for activism -- and it is conveniently so when white women want to tweet about equal pay, planned parenthood or sexual harassment in the workplace.

When issues that directly affect black women are trending, the same white women marching for "women's rights" and tweeting about Planned Parenthood are often the ones who go mum online. Stop doing that.

It doesn't hurt to shoot out a "this isn't right" post -- even if that's all you say. Don't feel disingenuous about saying something small.

Using your voice, however simply, is a powerful way to set the standard for what our country deems OK.

2. Know when not to insert your opinion.

Stay with me here.

I know I just wrote that you should speak up more, and you should. Knowing when not to insert your opinion is just as important for times when black women are voicing their experiences with racism that you cannot relate to.

There's no need to start talking about that time in fourth grade when a racist thing happened to you when your black friends are explaining their experiences to you.

Your experiences likely do not compare to the day-in-day-out lifestyle of surviving racism. They also don't compare to having an entire system (housing, education, banking, etc.) set up to stifle your upward mobility.

You have a gut; use it. Most of the time, when you feel you shouldn't be the one to insert an opinion: You're right.

It's OK that sometimes you just don't know what to say, for fear of saying something wrong.

Instead, why don't you find a few black women you follow online (do you?) and repost what they are saying about their experiences. Support their voices that way.

Race may be a social construct, but it is one that limits the political, social and economic opportunities for people of color.

For black women, racism and sexism are wingmen who rarely ever work separately. Acknowledge how racism affects our experience.

Black women don't need you to "not see color." We need you to see our color and respect us.

Our differences are what make us beautiful and don't deserve to be made invisible.

4. When you're sharing images, not all of them should be white.

So about those pussy hats...

All of them were pink, a semblance of what is typically a white woman's vagina. If the pussy hat is going to be a symbol of women's issues, you're going to need more colors than just pink.

It may seem small, but that was yet another way that black women and other women of color were visually erased from a powerful moment.

Another visual example was the video shared about illegal abortions. The video featured only white women and white nurses, as if black women have no traumatic experiences to share about abortion.

As beautiful as the video was, it would have had a greater impact had it been more inclusive and featured women from other races. Trauma does not belong to white women.

This goes for any images of women that you participate in creating or sharing. Pay more attention to that representation, and do it everywhere.

Always ask yourself if this visual excludes anyone in that struggle, and if it does, ask the person in charge, "Why?"

5. Pay attention to how you criticize black women.

Human beings, including black women, will be up for critique and that's OK. But watch what you're criticizing about them.

Too often, black women are criticized for the same things white women are celebrated for doing. An example is Beyoncé's Instagram pregnancy announcement.

A couple of days after her post, a thinkpiece emerged about how her announcement was "hurting" women who aren't pregnant.

Another writer took the time to inform the pop star that her baby bump "isn't what pregnancy looks like" -- in criticism of her seemingly perfect bump and the use of decorative flowers in her photos.

So, a mother cannot celebrate the birth of her new children because there is some woman out there who will be reminded that she is not pregnant and feel sad? And she also shouldn't use flowers in a photo shoot because that might give someone the wrong idea of what pregnancy will be like? Just no.

Black women deserve the freedom to live as they please just like everyone else. Start asking yourself if your criticism is based on something valid, or just a biased reach that you wouldn't make if she weren't of color.

6. Listen when black women share their issues with whiteness.

Buzz words like "white supremacy," "racism" and even "white people" can be off-putting, but ask yourself, "Why?"

It's important to put names on things and to call out what is happening. A person who is racist but doesn't mean to be deserves to be called out as much as, say, a Donald Trump. When black women call out racism, your defensiveness often dismisses their truth.

It's imperative for all of us to be willing to be held accountable. That includes the things that don't always feel good to you when you hear them.

7. Learn that "not all white people are like that" is not an acceptable response.

Trying to prove you are not racist is not going to stop racism. You holding your peers accountable for discriminatory behavior is more valuable.

Trying to shoot down a black person's experience by throwing up that "not all white people" or "not all white feminists are like that" undermines our simple common sense.

We understand very well that not every single white person on the entire planet earth is racist. We also understand there is a full system at play that even non-racist white people are complicit in -- knowingly and unknowingly.

Be open to being educated as well as held accountable.

8. Respect our right to black pride.

Whenever black women show any kind of self-love, it is often seen as exclusionary and anti-white, despite the fact that a lot of it is in response to us actually being excluded ourselves for so long.

Every year when Black History comes around, or when "Black Girls Rock" airs on BET, or when anyone makes #BlackGirlMagic trend on Twitter -- the response is "well, we don't have that for white people."

You do. It's called "mainstream media," which serves white people and makes them visible every single day.

Women of color deserve to have moments that belong just to them because we have been told forever that we are not worthy of it.

As a person in a position of privilege, it's not your place to ask why it exists. Just let it exist.