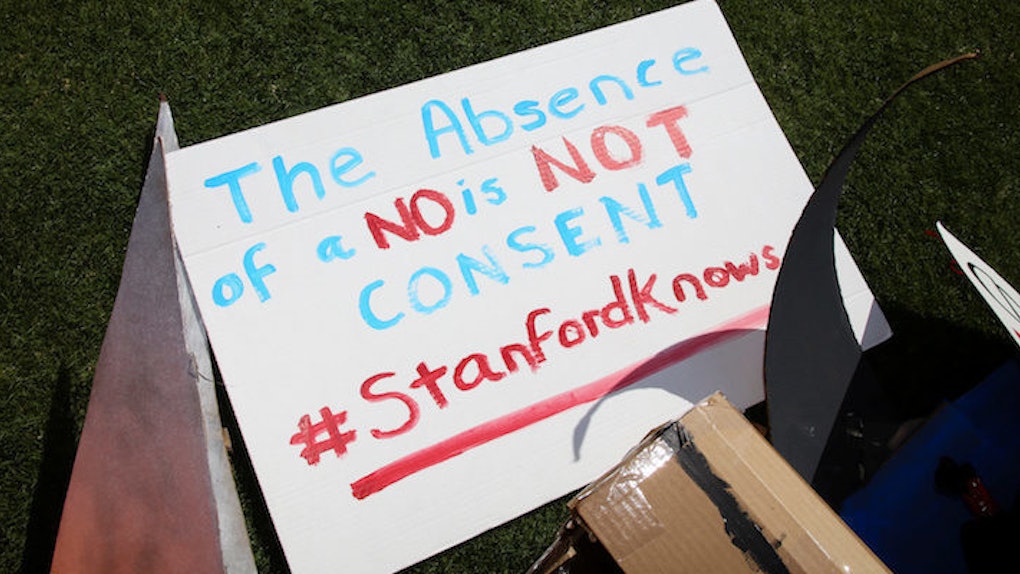 How The Stanford Case Inspired Me To Report My Own Rape

As most of you have heard by now, Brock Turner received a six-month sentence for raping a girl that has already been shortened by two months for “good behavior.”

It's mind-boggling to me that a rapist (I will not call him a boy nor will I call him a man -- I will call him a rapist because that's what he really is) can get out of jail in four months because of good behavior when the so-called “good behavior” should have been not raping someone in the first place.

To see Turner's friends and dad defend him as a “man” with talent, a passion for swimming and a future sickens me. How can the dad say his son is receiving a “steep price to pay for 20 minutes of action” when he raped an unconscious girl? I refuse to accept drinking as an excuse. I do not care if both the guy and girl are drunk -- consent is a sober, I repeat, sober yes.

When I read the victim's letter, I could not help but break down and cry. Her letter not only resonated with me because I am a college girl, but because I was also raped.

I will never forget the first weekend of my freshman year (or as Penn State knows, the Sylly Week, aka syllabus week). It's a time when college students are at much higher risk for sexual assaults than they are usually. I was out with friends. I had been drinking, but I was not at the point where I could not stand until the party got shut down and I was told to stay by my -- again, I will use the word -- rapist.

I had met the rapist the night before -- the only thing he knew about me was my name. When he asked me to stay, I was handed a shot. I took it, not knowing that I would soon no longer be a virgin.

I was going in and out of consciousness, and I woke up (I believe it was around 2:30/3 am) to the rapist having sex with me. I then threw up in his bathroom. He did nothing (well, he did throw Windex at me to clean up) but text my roommate and friend to tell them I needed to get Plan B in the morning.

When I woke up, he asked if I was mad at him and of course I said “no” because I could not process anything that had just happened.

I always want the best for people -- that's just how I am. It bothered me that I would be ruining someone's life if I reported the crime; as much as he would have deserved it, I didn't want to do that to someone. I didn't want that burden on me.

That changed when I read the Stanford letter.

I realized how selfish I was being by always wanting the best for everyone when I should have been trying to ruin my rapist's future like he ruined mine. I didn't think about the other girls he could have done this to.

The guilt of not reporting it finally got to me. I couldn't stand the fact that I knew his name and what he looked like, and I was letting him roam free. So, I Googled Pennsylvania laws and called the town's police the next morning.

This rape changed me so much. My rapist most likely forgot about this night, but I never will.

I used to be a writer. I would write for hours on anything, but now I only write when I feel like it. I used to hang out with my friends all the time, but now I never want to see them. I used to sleep well at night, but now I am up for hours never knowing how I sleep two or three hours a night; I never really had dreams, but now I have nightmares in which I'm reliving that night.

I used to have a 3.7 GPA in high school, but now I have below a 3.00. I used to be in a million clubs, but I started losing interest in them. I used to walk around campus minding my own business, but I saw him one day and I got nauseous -- now, I look over my shoulder. I used to always be happy, but now I always argue with my family. I used to eat, but now I can't look at food.

I used to get headaches when I was stressed out, but now I have them every day. I used to never go to a psychologist, but then she told me, “You are NEVER going to be the girl you once were before this.” I used to think PTSD was a thing people in the military could get, but then I had symptoms.

I used to be able to date, but now I am scared to talk or get close to guys (every time I talk to a guy I think about my rapist, and how I am going to have to tell my possible boyfriend if we start dating). I used to like when someone rubbed my back, but now I jump. I used to think I would lose my virginity to someone I loved, but then this happened and now I can't think about sex (I still haven't slept with anyone else).

I used to have feelings, but now I don't care.

To Brock, my rapist and any other rapist -- I do not feel sorry for you one bit. I hope you have sleepless nights. I hope you lose your appetite. I hope you ruined your chance at a degree and a job. I hope you think about what you did every second for the rest of your life.

You ruined me. The old me would feel sorry for you, but I'm not her anymore.