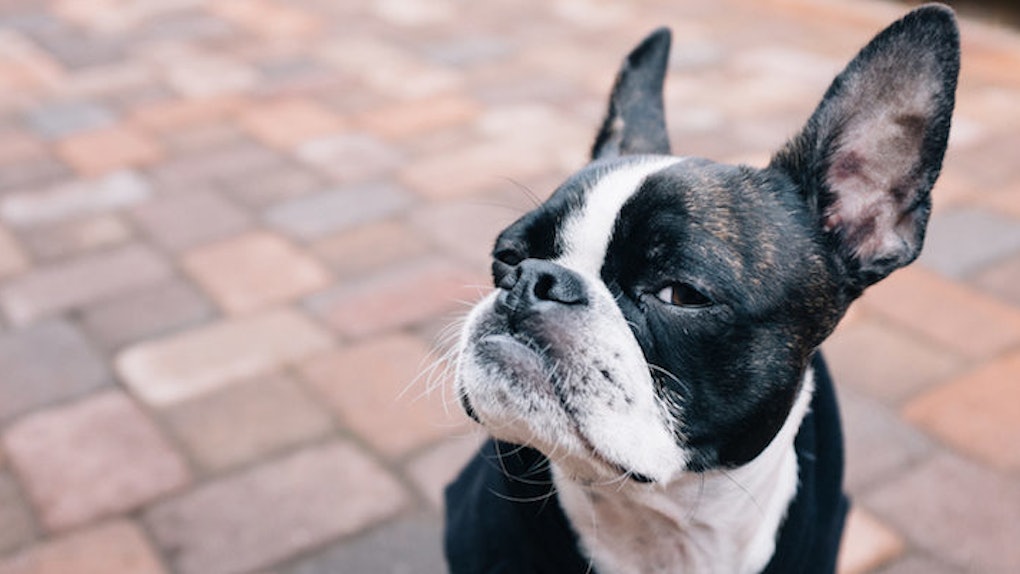 Let’s get this out of the way: I love my dog.

No, scratch that. I’m borderline obsessed with her.

Chloe is a Pomeranian Chihuahua mix from South Carolina. I adopted her from a local shelter last year. Needless to say, it was love at first sight.

However, she’s also half the reason my sex life is in shambles.

Don’t get me wrong, she’s the ultimate wing woman at the dog park. She’s just not so great at the follow-through.

For one, Chloe hates to be left out of anything.

She doesn’t patiently wait by the door until I get out. Instead, she cries and scratches until I let her in. Personal space? What’s that?

Singles without a pooch (or cat, or lizard) of your own, let me tell you all.

The struggle is fur real.

Chloe sleeps with me and, according to my roommate, rolls around in my bed when I’m not home.

She also seems to think hopping aboard when I’m getting down and dirty is totally normal. I’m not sure if she thinks I’m being impaled or just playing.

In her eyes, the bed is where the action is. Chloe's never one to sit on the sidelines.

2. She always needs to go just when things are getting good.

My date and I are kissing. Clothes are coming off. We’re about to get down, but Chloe won’t shut the f*ck up.

She does her “bitch, I gotta pee” dance, looking back and forth between me and the door. She whines.

Mama needs to get it in, but she's got to go out.

3. I give my dates a lint roller before they leave.

My bed is covered in dog hair.

No matter how often I wash my sheets, there’s always a blanket of golden fur on them. Sorry, I can’t help it.

It’s an awkward moment when my date gets up and there’s fluff all over him. There's fur on his boxers, his shirt and even in his hair.

Most guys don’t care, but it’s still awkward as f*ck when I have to hand him a lint roller before he leaves.

As if I need yet another criteria to filter down my dating life, no one I bring back to my apartment can be allergic to dogs.

Sorry, but Chloe is unavoidable. Her smell — which I find comforting, but might gross some people out — permeates everything. She'll probably want to lick his face and sit on his lap.

If you enter my apartment with a dog allergy, you’re signing your own death sentence.

5. She always wants to sniff his crotch.

Chloe likes nothing better than snuggling up to a date’s lap and sticking her nose right between his or her legs. Thankfully, she can only reach most people’s ankles.

It’s times like this I wish I was able to communicate with animals, Doctor Dolittle-style.

It would be nice to ask my dog what it smells like down there before making the commitment to dive in head-first.

6. She responds to my moans with howls.

Okay, we finally got a rhythm going. We’re bumping and grinding and it’s getting good. I’m moaning, he’s groaning and all of a sudden, Chloe starts howling.

I like a musical accompaniment as much as the next girl. By all means, throw on some swelling violins or a bit of Drake on Spotify.

No one ever asks my dog to unleash her inner Balto and howl along to our sexy time.

It's not an assumption. Chloe always has the same expression on her face when she catches me in the act and it's never one of approval.

In fact, her face is probably the physical embodiment of slut-shaming. If that's not a lady boner killer, I don't know what is.

A guy once asked me to gate Chloe up in the kitchen because she kept peering up at the bed with what he described as a "rude" look.

I didn't gate her. I kicked him out, instead.

Chloe and I are kindred spirits.

She loves boy dogs and nearly always gets aggressive around girl dogs. She is possessive of food, treats and my bed.

We get each other.

She also has a tendency to hump everything. Human legs, chairs, other dogs and my cat are her favorite victims.

Chloe also feels the need to congratulate me on my sexual prowess by humping a pillow every time someone decides to hump me.

You know what's awkward? Making eye contact with your dog while you're getting f*cked doggy style and she's doing the same to an inanimate object.

As I mentioned, there's nothing more comforting to me than Chloe's scent.

Wait, scratch that. There's nothing more comforting than Chloe's scent when she's clean.

Anyone who has ever had a dog knows there is nothing smellier in the world than a dog fart. Naturally, Chloe farts a lot.

They're silent, but deadly, and she has a tendency to unleash them around company.

The following is a true story.

I finally brought a guy home after a particularly long dry spell.

We got into it once we got to my place. Clothes were coming off in the elevator. We barely made it to the bed before he had me on my hands and knees, bending over behind me.

I made one trivial mistake that evening: I didn't say hello to Chloe.

She got offended and was, obviously, curious about the man who took my love away from her.

Without either myself or the guy knowing, she jumped on the bed behind us. As I was getting my just desserts, so was Chloe. She began licking his assh*le.

I don't think I've ever seen anyone leave so quickly. Chloe looked pleased with herself.

Moral of the story: go to his place.