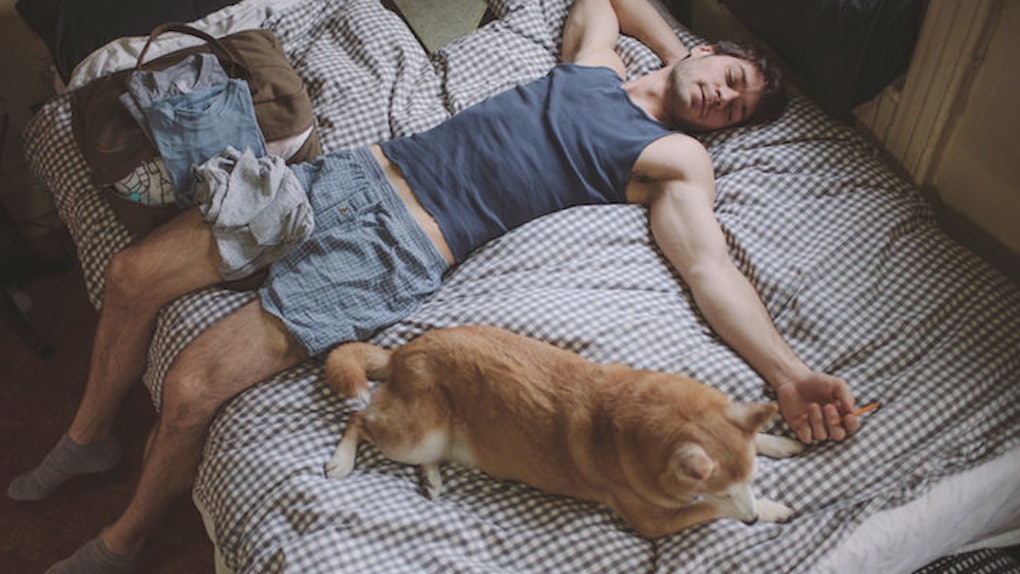 Hot Dog: What A Man's Dog Says About His Dating Personality

It’s no secret that dudes with puppies are basically like kryptonite for our ovaries. But what's more important than owning a dog? Owning the right kind of dog. Sorry, hotties with chihuahuas, but those little rascals don’t exactly set our hearts aflutter.

Whether you’re more of a Pomeranian babe or a Pit Bull fan, you can tell what that cutie at the dog park is really like just by checking out what's on the other end of his leash.

If he has a Pit Bull, he knows how to take charge.

A guy with a “pittie” knows how to take the lead. He’s always the top dog at the dog park — er, office — and he isn’t afraid to get aggressive when he necessary.

Don’t let his rough and rugged exterior fool you: He’s all mush on the inside, and would always be down for a snuggle (after some roughhousing in the bedroom, of course).

This dapper gent oozes sophistication from every pore in his body. He’s classy AF, and you won’t be able to resist that telltale charm. Despite his sleekness and need to always be relatively put-together (think: John Legend), he’s still down to get a little dirty — between the sheets, that is.

This dude is all about playtime 24/7. Sometimes you might question his maturity, but despite his eagerness to always be on his feet, he’s super affectionate and will love you tirelessly. Sure he’s exhausting, but that means he won’t tire out after a long love sesh.

Watch out, though, within five minutes he'll be drooling all over you.

A Great Dane owner understands the importance of size, and he likes to make his presence known. He's down to binge-eat through the Sunday Scaries with you and then make you feel small cuddling in his arms after.

Don’t let that height (or anything else) fool you — he’s happy being on the sidelines and letting you take center stage, just be sure give him a treat afterward.

If your boy owns a Goldendoodle, he’s ready to settle down.

A Goldendoodle boy's ideal date is staying in, watching Netflix and teaching you new tricks...in bed.

Guys with Bulldogs are chill AF.

If the man you’re eyeing is papa to a bulldog, he definitely knows how to keep things relaxed and comfortable. He’s happiest smoking a blunt while binging on "Orange is the New Black" on a Sunday afternoon, and that’s glorious.

He might have hip problems later in life, but that doesn't mean Bulldog guy still can't get jiggy with you.

Corgi lovers spend a little too much time online.

Dudes that own corgis are always on top of pop culture references. They’re the best to tag along to your bar’s trivia night, spewing out random "Walking Dead" facts. They’re nerdy-cute and so are their dogs, so keep both around.

Boston Terrier lads are always down for a good time.

Dudes with Boston Terriers don’t understand the word “no." They want to spend most of their time doing stuff, which can range from cleaning your entire apartment to going skydiving with you. So if you aren't Adventurous Alice, you might want to stick to cats.

Bonus points: These guys (and their dogs) are excellent kissers.

If your main man’s pooch of choice is a pug, he’s sensitive to the max. You’ll feel comfortable baring your heart and soul to him, and he’ll be one of the best listeners ever. Just know his squashy-faced pup will always be number one.

His ideal date is taking you to a poetry slam and then licking your peanut-butter-covered nipples after.

Pomeranian papas are not about to take your sh*t.

Pomeranian dads know what they’re worth, and they’re not about to let themselves be walked all over, so don't try to tame this one. That said, they’re also all about being upfront with what they feel — especially if it's love for you.

If things get complicated, remember, their bark is bigger than their bite.

Chihuahua men care more about themselves than you.

If that dude has a chihuahua, run away and don't leave a trail — they’re all about themselves and their problems. They’re fun to be around and have tons of personality (and sometimes come with burritos!), but you definitely won’t love how they spend hours hogging up the bathroom mirror and leaving no space for you.

If he has a cat, he’s probably the spawn of Satan.

If he has a cat, hightail it the f*ck out of there. That's one animal you don't want to take care of.