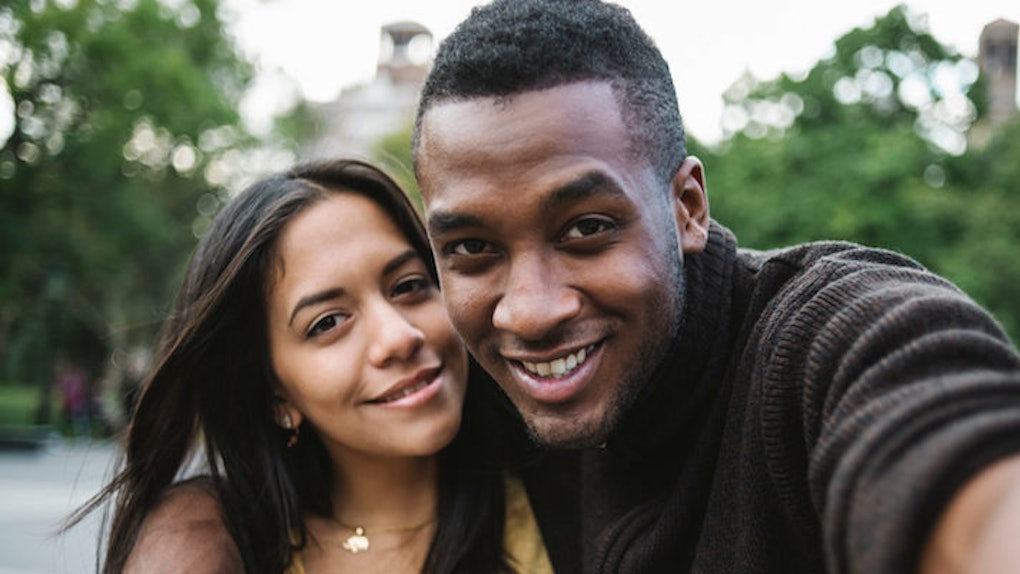 I've had an affinity for assholes since my first boyfriend at 16.

He would ignore my calls and cheat on me, then we'd argue and make up. This hopelessly obsessive love cycle repeated until we were both too exhausted to care about each other anymore. And even when it was over, it still felt like love.

Maybe my daddy issues are the reason why I have a thing for bad boys. Or, perhaps that first relationship conditioned me to believe unstable passion is the only type of love I deserve.

A nice guy's compliments pale in comparison to the rush of pursuing a guy. I crave the thrill of the chase and winning him over. Sure, it may take a GPS and a black light to figure out his feelings, but the cat-and-mouse game is exciting. The man-eater in me feasts on it.

That is, until I opened up myself to a good guy.

For so long, I was emotionally allergic to the nice guys. I found them to be boring doormats. They were merely play things when I needed attention.

They're practical, safe dudes who won't put you in your place when you need it. They were never wild-hearted enough for my restless spirit, and could be clingy or obnoxious. Plus, doesn't it always seem nice guys have their shit together a little too much?

Still, by giving the nice guy a real shot, I not only learn how wrong I am about them, but also how emotionally f*cked up I am.

Lesson 1: I can be pretty mean at times.

Being nice isn't really a chore for me. I'm kind-hearted and considerate, unless I'm on the fence about a guy. Then, I'm ice cold and distant.

For example, the one guy in my life I've deemed "the good guy" tried to visit me one weekend. Typically, an impromptu decision to visit the person you like is a kind gesture, but I was furious about him showing up when I wanted to nothing more than sleep.

Instead of seeing his visit as a pleasant surprise, I saw it as some intrusion and infringement on what I wanted.

Yep, I was a bitch. After my initial rage wore off, I realized he didn't need a behavioral adjustment. I did.

Though I'm not 100 percent riding the nice guy bandwagon, I need to dial back the bitchiness when it's unwarranted.

Lesson 2: I have to warm up to the idea of love.

Once upon a time, I would have enjoyed the instantaneous love I watched in "The Wedding Planner."

But, I've had that, and most often it leads to a lot of sex and not much else. That's why I'm freaked out by nice guys who tend to lay their emotions on too thick, too soon.

The incessant compliments and adoration only make me want to flee to the nearest exit. Rushing from dinner dates to weekend trips will make me shut down emotionally. I need time to process my attraction before I can warm up to a guy.

I want the love I have for my partner to grow at a slow pace in order to ensure we truly get to know each other.

Slow and steady wins my heart.

Lesson 3: I have a fear of being really, really happy.

Somewhere along my dating journey, I learned never to get too comfortable in relationships. Will bae piss me off and make me hate him? Will he hurt me once I finally feel vulnerable? Even though things are good, I can't just enjoy the ride because I'm painfully waiting for the ride to break.

I'm terrified that I'll get hurt by him or a curveball life may throw at us, so I keep a safe distance.

Every day is a battle to learn how to just be in a good situation.

You don't realize how emotionally damaged you are until someone takes a genuine interest in you. Nice guys will do that, and it's frightening.

My "good guy" and I were recently talking about our families, discussing where we came from and how we grew up. The conversation had turned one-sided when I started asking more questions than answering his.

I was blocked off. There were a lot of things I wasn't ready to share and had no intentions to further down the line.

Lesson 5: I don't practice what I preach.

My girlfriends can always count on me for solid advice, like "don't be afraid to give great head" and "don't date sh*tty dudes."

I would never advise the girls in my squad to compromise their happiness for a f*ckboy. However, I don't take my own advice. For years, my friends begged me to date a guy with a legal job or to give the good guy a real shot. And, until recently, I fiercely ignored them.

Still, I think about running back to my asshole exes, to what's familiar, instead of sticking it out.

Lesson 6: I have no clue what I want.

I've been getting "good morning" texts since I had a Sprint flip phone. What's different now is that the good guy genuinely wants me to wake up on a good note.

Some days I'm thankful for that. Others, I'm annoyed someone cares that much. It sounds crazy, I know. But, there are days don't want to be considerate of a guy's feelings just because he cares about mine.

He's also the exact opposite of my type. He's everything I didn't know I would need emotionally.

So, did I have my type all wrong? Can I not even trust my own taste in men these days?

For now, we're seeing where things go. Who's to say dating the nice guy will lead to anything more than a few fun months? This is uncharted territory for me and I don't know what the future holds. I'm just thankful this process is allowing me to face the woman in the mirror.