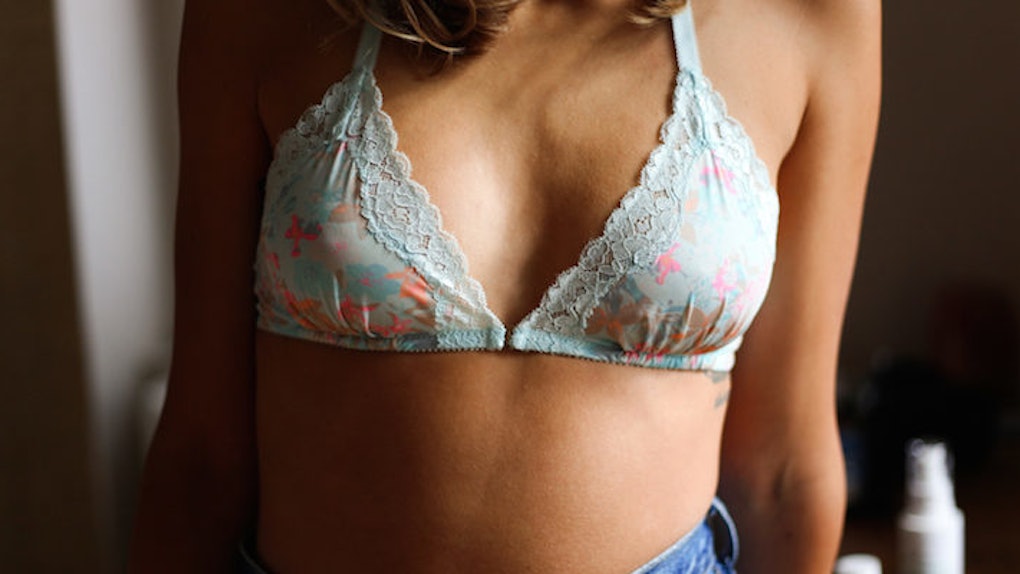 You're Probably Making This One Huge Mistake While Bra Shopping

Women like to argue over which boob is the better-looking one, what neckline best flatters decolletage and whether underwire really is the devil (I say it's a smear campaign). But, there's one thing ladies of all breast sizes can agree on: Finding a bra that fits is nearly impossible.

As it turns out, that's because the bra industry is willfully screwing us — and our "girls" — over. Standard sizes don't fit, and nearly every woman knows the frustration of being told you're a 34B at Victoria's Secret and a 36C at Bloomingdale's. Getting support shouldn't be a struggle.

Michelle Lam is on the same page. She's the CEO and co-founder of True & Co., a bra business founded on a detailed Fit Quiz that identifies problems in your current bra model before recommending a new one. Since the company's debut in 2012, it has sold its own line of undergarments alongside curated picks from other brands.

Getting fat rolls from your back strap or under boob from a wire that doesn't fit snugly against your ribcage? You need this. Plus, you can even sign up for a five-pair home try on kit. If you don't like a style, you'll be prompted to review it and an algorithm will reshuffle the site to cater to your preferences.

Across the board, though, Lam sees one problem complicating the buying strategies of the women in her life: boob shape.

You know those conveniently circle-shaped cups retailers love to push? They don't look anything like your breasts, so they can't comfortably support them. Some A cups are long and thin, while others are bouncy and round. The same goes for larger breasts as well, speaking as a semi-permanent owner of cups that literally runneth over almost every bra.

"Bra technology — what we use today, the band and cup size — came about in the 1930s,” Lam told me, comparing the complexity of bra construction to building a car. "At that point, they had not even thought of an E cup. And the E cup was kind of tacked on the end like a footnote. The entire system has been based on something very arbitrary for a really long time."

Thanks to the 2 million women who've taken True & Co.'s survey, the company's working with 60 million data points that prove each woman needs a customized fit. Don't just read the tag, Lam stresses. Feel the fabric, and see how it looks across the skin of your back. Make your decisions based on a number of factors, not just a letter some lady with a measuring tape assigned you in a Nordstrom fitting room.

Lam's focus on shape isn't new, either. Cult-like Internet forums including Reddit's /r/ABraThatFits play host to legions of women guiding others as they attempt to find bras that don't gap or chafe.

"Women's bodies are just different,” Lam says, speaking as a woman who's seen “so, so many breasts” since starting the company. "There's all these nuances. There's sternums sticking out at interesting angles and boobs that are not the same shape. All these different variations. They're all beautiful, it just requires the right frame to put them in."

So, what's next? Lam advises reevaluating your preferences, even if you're push-up kind of gal. Look for seamed cups (made with multiple pieces of fabric), which provide less in the way of shaping but tend to fit the breast more closely. Above all else, don't be discouraged by the pre-existing sizing system.

"Every body type is a new territory to map," Lam says, explaining that she's at the beginning of a long battle to reshape the bra industry. "We feel like we're making some real progress and women are responding to it."