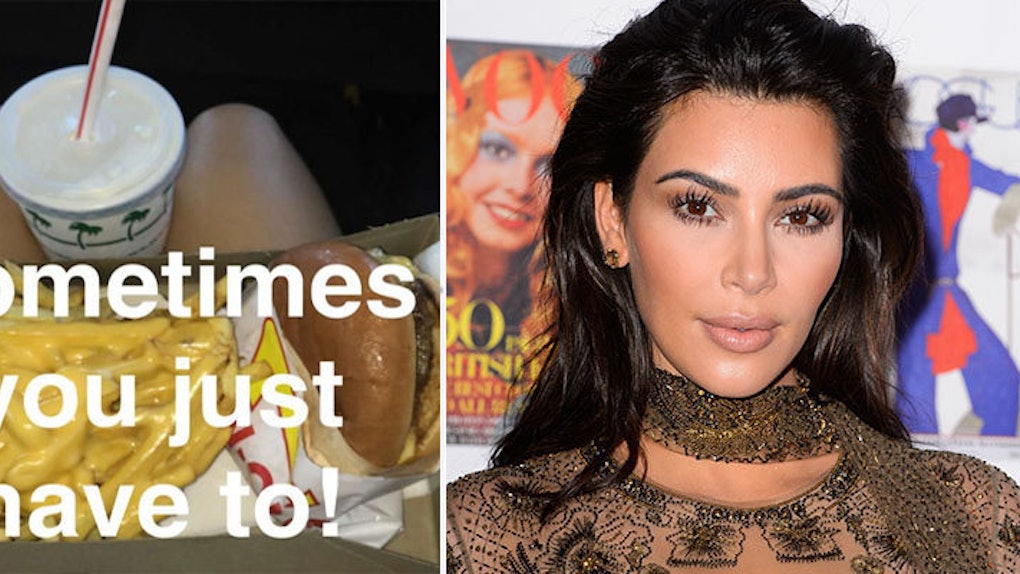 I respect Kim Kardashian for being so open about her diet. It's OK to talk about dieting, people.

We all know she's been super strict about the Atkin's diet and her workout regimen. But, Kim K is human too -- and dieting is no picnic.

Last night she snapped a picture of her delicious looking In-N-Out meal: a burger, cheese fries and a shake.

She writes, "Sometimes you just have to!" Kim, we feel that.

Your first instinct might be to call out Kim for cheating on her diet -- but cheat meals are crucial to actually staying on a diet for longer than five days.

They help keep you sane. The truth is, you can't eat perfectly all the time. You would be miserable.

Not letting yourself indulge makes cheating on your diet more likely. After weeks of eating restrictively, one afternoon of noshing on junk could turn into a downward eating spiral that lasts for weeks.

Kim K eats well most of the time, but she allows herself the occasional shake and cheese fries, which is why it's easier for her to stick to her diet.

In-N-Out isn't a daily or even weekly occurrence for Kim K. How do I know that? Because if it was, she wouldn't have gotten in shape so quickly after giving birth to her second child, Saint.

Since she's so good about staying on her diet and working out consistently, cheat meals won't make her feel guilty. So yeah, going for the burger once in awhile can actually eliminate cheat meal guilt.

Diets aren't all or nothing. Just keep the junk out of your homes and make indulging a rare treat.

I actually had a very similar cheat meal last week at Shake Shack, which is basically the In-N-Out of the East Coast.

Also, let this be a reminder that we have cheat MEALS not cheat DAYS. People stretch their indulgences out for too long, and that's why it's so damn hard to stick to dieting.

I'm not sure if Kim planned this In-N-Out meal or got it impulsively, but I'm 99 percent positive she didn't follow that meal with five slices of pizza with a giant thing of cola.

Either way, it's best to plan your cheat meals. Why? Because you look forward to them. And since you know a cheat meal is in your future, sticking to your diet will be a lot easier.

Take it from Kim K.