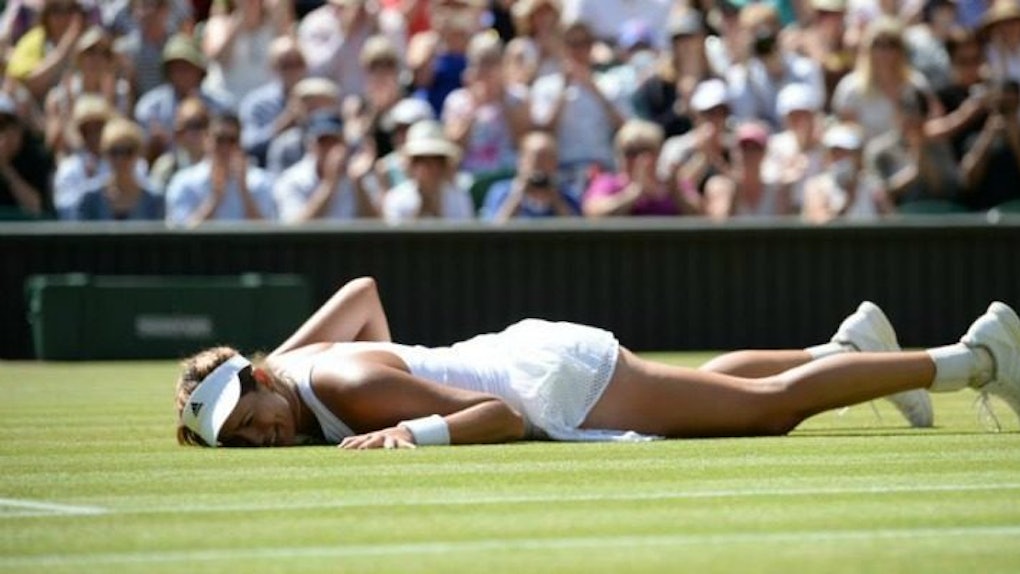 With the very first tournament dating back to 1877, The Championships, Wimbledon is the oldest Grand Slam in tennis.

And much like an out-of-touch grandpa from a bygone era, it's also the most sexist.

At first glance, the All England Lawn Tennis and Croquet Club is ripe with an air of arrogance and smugness.

Both male and female players are forced to wear all whites, the crowd is supposed to remain gentlemanly and lady-like, both in dress and demeanor, and grunting is clearly frowned upon by fans and journalists alike.

But following the match, all anyone wanted to ask the players was how they felt about the crowd laughing at their on-court grunting.

Azarenka, who was probably already pissed after losing the match, said,

I'm so tired of these questions all the time. It's so, in a way, annoying because guys grunt. I was practicing next to [Rafael] Nadal and he grunts louder than me.

In 2007, Wimbledon became the last of the four majors to award equal prize money to both men and women.

Apparently, though, equal pay does not mean equal play.

This year, women received just 38 percent of the scheduled matches on Wimbledon's two biggest courts, Centre Court and No. 1 Court, and only 28 percent of the total match time in those two stadiums.

This is not something that is in line with the Australian, French and US Open.

At the most recent installments of those tournaments, women received between 49 and 54 percent of the scheduled matches on show courts and at least 11 percent more playing time.

In other words, things were, like, equal between men and women. What a concept.

After losing to Garbiñe Muguruza in straight sets, Caroline Wozniacki used her post-match press conference to address this issue.

Every year there's two men's and one women's match on the main courts, Court No. 1 as well as on Centre Court. You know, we're still fighting on that. We've made some progress, but hopefully we'll keep making more progress.

The All England Club declined to respond to Williams's and Wozniacki's comments directly, but they made the following statement:

...scheduling of the programme of matches to be played each day at The Championships is complex operation.

It may not be possible to satisfy the often conflicting requests, but in all cases fairness will be the objective.

Gilles Simon, who is currently the No. 13 men's player in the world and has previously voiced his belief that female tennis players should get paid less than men, seemed to have a differing opinion on court allocation.

I don't see any big problems about the scheduling.

Simon, have you met Sepp? I feel like you guys would really hit it off.

Maybe Azarenka had a good reason for excessive grunting, the former world No. 1. didn't get on either of Wimbledon's two show courts for any of her first four matches.

The sixth-ranked woman in the world, Lucie Šafářová, couldn't get a reservation, either.

A Wimbledon spokesperson offered up another indirect statement to explain how this could be:

The major marquee players will normally be scheduled on the stadium courts with Centre Court and then No. 1 Court seeing the leading names. This is expected by both the paying public and TV audiences alike.

And according to FiveThiryEight, this appears to have nothing to do with the occurrence of higher female seeds being upset in the tournament.

Wimbledon has made notorious headlines before, though.

At the 2013 tournament, former Today at Wimbledon host John Inverdale stated women's champion Marion Bartoli was "never going to be a looker."

I'm not sure what Bartoli's looks had to do with her playing style, or how Inverdale's comment's gave any historical perspective to the fact that she had just won the first and only Grand Slam title of her career.

The British press also has something of a history of targeting male players' wives and girlfriends, both on camera and in print.

Also at the 2013 event, Andy Murray's then-girlfriend, Kim Sears, was zoomed in on by cameras after every big Murray point.

In addition, Sears was compared to the wives and girlfriends of several other male players at the tournament.

I must've missed the Kim Sears hot-or-not section on the Wimbledon app that summer.

And earlier this year, Wimbledon was forced to issue an apology after using a controversial image of the Athena Tennis Girl poster to promote an upcoming exhibition at the All England Club.

We apologise for offence caused by the Athena Tennis Girl poster. It is a controversial piece of poster history but we do not endorse it. — Wimbledon (@Wimbledon) March 18, 2015

Many pointed out the picture of a female tennis player showing off part of her backside did little to promote the women's game.

So disappointing from official @Wimbledon twitter account, while players continue to struggle with sexism in sport https://t.co/j6pDLZfbZU — EverydaySexism (@EverydaySexism) March 18, 2015

In addition to fielding questions about the sounds she makes while competing at the highest level of professional tennis, Azarenka also had this to say to detractors of the women's game:

Look at the good stuff. Stop bringing this ridiculous stuff. Let's put aside the noise and how she looks, and look at the game.

Let's hope that when Serena Williams and Garbiñe Muguruza take Centre Court on Saturday, all eyes will be on two great tennis players.

Nothing more, nothing less.