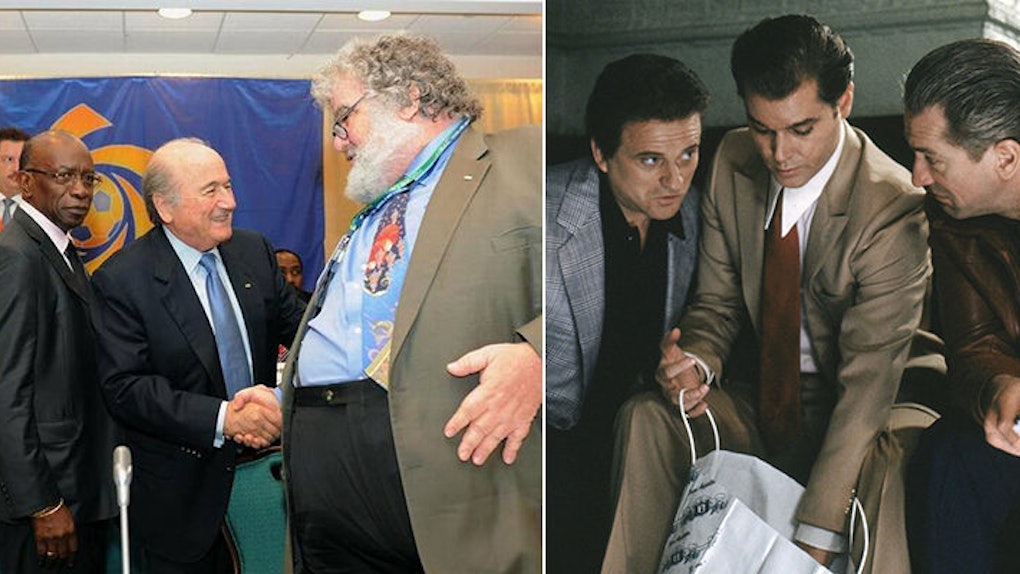 The FIFA Corruption Scandal Is Basically The Same Plot As 'Goodfellas'

What do you mean I’m funny? Funny how? I mean, what’s funny about it?

Honestly, there’s nothing comical about the FIFA corruption scandal that’s rocked the world over the past week.

Sure, we laughed at the fact that former FIFA executive Chuck Blazer used ill-gotten funds to buy his cats an apartment in Trump Tower.

And I almost fell out of my chair after seeing former CONCACAF President Jack Warner cite an Onion article as his lead defense.

Oh, and let’s not forget about the $30 million FIFA spent to make a movie about, well, the greatness of FIFA.

Sure, the director quibbled that his hands were tied for much of the creative process, but what did Mr. Auburtin really expect?

Maybe this whole thing is pretty funny after all.

Bribery, wiretapping, money laundering and racketeering aren’t what you’d expect from a nonprofit organization that claims to be both for the game and for the world.

But as we’re quickly learning, FIFA has more layers than an onion.

It’s clear now, that with an internal and meticulous hierarchy of bosses and goons, FIFA is basically the Mob.

And uncovering detail after detail of FIFA’s egregious transgressions is akin to watching any number of classic mafia movies.

But unlike your favorite gangster flick, it’s still unclear how this FIFA horror story will play out. How deep does the corruption run? Where does the buck stop?

We’ll know more in the coming days, weeks and months, but for now, here’s why everything we’ve learned so far about the FIFA corruption scandal can pretty much be summed up by Martin Scorsese’s classic, "Goodfellas."

In the beginning, FIFA execs saw one another as just a bunch of good guys.

Sepp Blatter and his band of merry men had it all. I mean, can you think of another nonprofit organization that has a billion dollars in the bank?

Blatter, Blazer, Warner and a roster of other wise guys controlled the global governing body of the most popular sport in the world.

Blatter was cruising toward a fifth straight presidential term, often running unopposed in previous elections – as in, check off his name or don’t vote.

Until recently, these guys were untouchable.

And like Scorsese’s wise guys, FIFA didn’t give a crap about anybody.

The Lufthansa heist is equivalent to awarding the 2010 World Cup to South Africa.

Just as Henry Hill, Tommy DeVito and Jimmy Conway pulled off the heist of the century by robbing the Lufthansa cargo area at JFK airport, several FIFA execs expertly lined their pockets by promising to cast their World Cup votes for South Africa in 2010.

Now, you may argue that breaking into a cargo area, tying up some employees and walking out with a boatload of cash isn’t exactly the same thing as excepting money in exchange for votes.

But, isn’t the result the same in the end? Dudes walked away with money they never should’ve had in the first place, and the course of history was changed forever.

You know Chuck Blazer was in the shower the day after South Africa was awarded the World Cup like:

Replace Jimmy with Sepp, and, well, you get the picture.

In a 40-page document recently released by US federal prosecutors, Blazer described how he and other FIFA officials took cash in exchange for tipping the scales heavily in South Africa’s favor to host the 2010 World Cup.

Blazer also helped broker at least one bribe in connection with the 1998 tournament; though the money he took then amounted to a failed attempt to help Morocco secure hosting rights.

After pockets of evidence linking Henry, Jimmy and other higher-ups to the Lufthansa heist starting popping up, the crew whacked anyone even loosely linked to the robbery.

Bodies were uncovered left and right, much like every new accusation and piece of evidence that continues to dig a deeper grave for FIFA.

In the end, though, the scheme got too big and the walls came crashing down.

Henry Hill’s frantic final moments were spent at Sunday dinner with his family. Suspicious of being followed for much of the day – and who knows how long before that – the feds finally nabbed him as he was backing out of his garage.

Henry and the crew got too big for their britches. Dealing in guns and drugs with those shady guys from Pittsburgh wasn’t the sole reason for their downfall, but it was the final nail in the coffin.

For FIFA, the first hammer blow came on Wednesday, May 27, when a group of Swiss plainclothes officers led a dawn raid of the Baur au Lac hotel in Zurich and arrested seven top FIFA officials.

Later that day, the US Department of Justice announced the unsealing of a 47-count indictment that detailed the charges against 14 officials for racketeering, wire fraud and money laundering.

The indictment also stated that over the past 24 years, FIFA officials have taken over $150 million in bribes.

Two days later, Sepp Blatter was reelected as president of FIFA, but he resigned just four days after that. The fire FIFA had come under was simply too hot for Blatter to handle, and the 79-year-old saw the writing on the wall.

“Profound restructuring” has been called for by Blatter, but can we really restructure things before we know how deep the corruption runs, how many players are involved and how many decisions have been affected?

Now, Chuck Blazer is in the process of trying to cut a deal with the US DOJ in exchange for leniency once the dust settles, Jack Warner claims that he has an “avalanche” of secrets to spill and both are ready to sing like Henry Hill before he went into the Witness Protection Program.

The parallels between the FIFA corruption scandal and Martin Scorsese’s 1990 classic are eerily similar, but for soccer’s sake, let’s hope this movie has a happy ending.