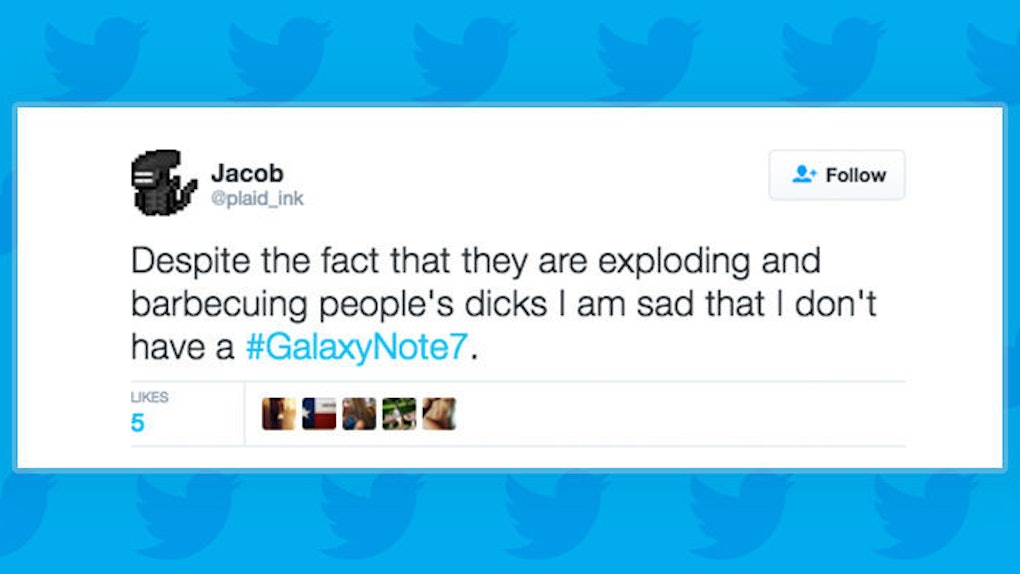 Apple and Samsung have been dominating tech news this week, thanks to their latest smartphones.

A couple of days ago, we showed you a bunch of hilarious reactions people had to Apple's unveiling of the new iPhone 7 features.

If you thought those remarks were pretty entertaining, you'll be glad to know the iPhone 7 isn't the only smartphone out there that's getting a ton of attention on social media.

Between the iPhone 7 unveiling and Samsung Galaxy Note 7 exploding, this is gonna be my next cellphone: pic.twitter.com/B7Lba7Gua2 — Billy Corben (@BillyCorben) September 9, 2016

Apparently, Twitter is also blowing up with reactions to Samsung's phone recall. It's being referred to by some as "Flame-Gate."

Yep, if you haven't heard the news, Samsung recently had to recall 2.5 million Galaxy Note 7 phones around the globe due to battery-related issues that caused the phones to catch fire.

In fact, the battery problems are so bad that the US Consumer Product Safety Commission has warned Samsung users to turn off their phones, and some airlines have even banned passengers from bringing these explosive smartphones onto planes.

Check out the tweets below to see some of what people are saying about the Samsung's "hot" new smartphone.

Samsung recently recalled Galaxy Note 7 phones because their batteries were bursting into flames...

The #Samsung #GalaxyNote7 is the #DonaldTrump of smartphones. It's yuuuge & explodes without warning. pic.twitter.com/zLVRmOFLYp — Adam Rackoff (@AdamRackoff) September 3, 2016

...and now, Twitter is blowing up with all sorts of hilarious reactions.

Some people compared the volatile phones to hand grenades...

Others compared the Galaxy Note 7 to the iPhone 7...

...and some tried to figure out which was worse, the exploding batteries or the lack of a headphone jack.

Some people even made remarks about their new phone FOMO, despite the fact that these phones are basically blowing people's dicks off.

Despite the fact that they are exploding and barbecuing people's dicks I am sad that I don't have a #GalaxyNote7. — Jacob (@plaid_ink) September 2, 2016

Resourceful Samsung users posted simple suggestions about how to make the phone safer, like using it underwater to prevent fires...

Samsung recalls it's new flagship phone #GalaxyNote7 due to exploding battery fears. So to be safe use it underwater. — MKMugi (@Mkmuya) September 2, 2016

...and placing it on ice to fix the overheating battery issues.

When your new Samsung phone has a tendency to overheat and explode while charging, but is also waterproof. pic.twitter.com/0127gtiWBT — Mother Of Sarcasm (@SarcasmMother) September 9, 2016

...like placing it in a fire-retardant case to protect yourself from third-degree burns.

The best reactions came from people who decided to poke fun at the problem.

They posted all sorts of clever puns about the explosive phones.

Apple needs to announce something big today to keep up: Samsung's phones have been on fire lately, with a lot of "bang for your buck", — Fiora Aeterna (@FioraAeterna) September 7, 2016

No, really, the Twitter puns have been on fire since the recall.

When it comes to the Samsung Galaxy Note 7, users are having a blast. — not Jony Ive (@JonyIveParody) September 3, 2016

If Twitter puns aren't the things that make you tick, don't worry...

...because people are also posting some plain old Samsung jokes that are totally the bomb.

I think it's safe to say iPhone users have finally won the age-old, "Which phone is better?" debate.

People you shouldn't argue with : vegans, feminists, atheists and those who think samsung is better than iphone. — Ahmad (@A7maad_Ali) September 3, 2016