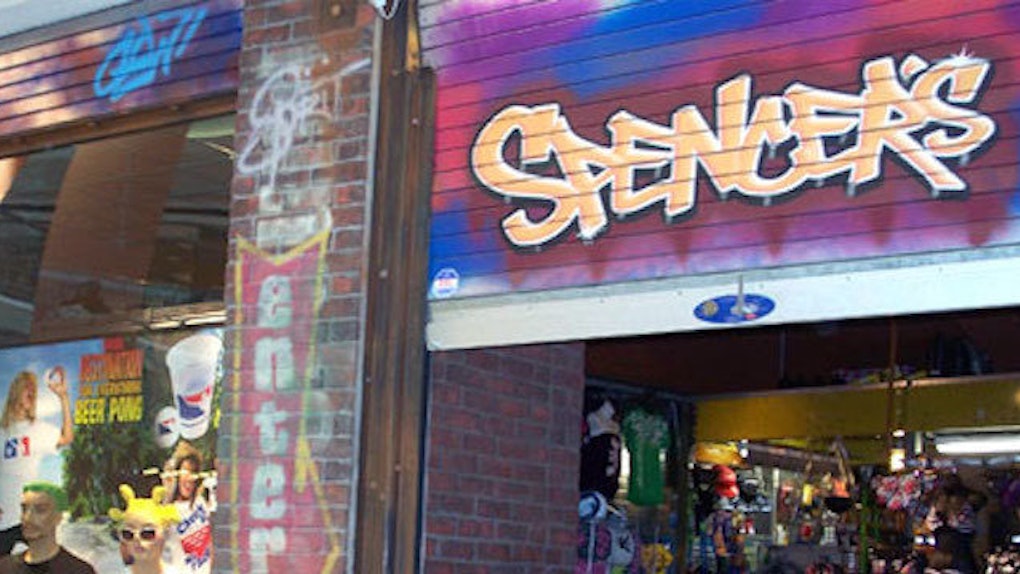 For as long as I can remember, Spencer's has been a store where you buy gag gifts.

And by "gag gifts," I mean stupid but semi-funny bullshit gifts, like plastic penis straws, fake nose rings and tacky shirts with glittery rainbows you wear to Pride festivals when you're 16 and don't know better.

But now, it turns out Spencer's literally sells "GAG gifts," seeing as I physically (and loudly) gagged when I SAW THIS on their website:

Um, an entitled looking white male modeling a shirt that says "GRAB AMERICA BY THE PUSSY" is enough to make me GAG so intensely, I just might blow chunks across the computer screen.

Oh, and if you're not already sick to your stomach, check out Spencer's eloquent description of the shirt:

He's done it again. The Donald grabbed America by the pu$$y this election, now you can too with this hilarious political tee! This laugh out loud Spencer's exclusive shirt is perfect for reminding everyone that Trump's in charge.

I'm sorry, but how can you say that Donald Trump "grabbed America by the pussy" when he lost the popular vote by almost three million votes?

If America did have an actual, real PUSSY, and the PUSSY could vote, I guarantee the PUSSY wouldn't vote for Donald Trump.

Donald Trump tries to control the pussy and disrespect the pussy, and the pussy doesn't like that. After all, a pussy is a vagina. A vagina is a powerful life force that would never vote for a sexual predator.

Oh, and check out another one of Spencer's GAG shirts:

PSA: Using a model with tattoos does not make your shirt cool. No wonder he didn't want his face shown, he was probably mortified to take this picture! Spencer's tagline should read "putting the GAG in gag gifts."

So it's time to boycott Spencer's for this disgusting, sexist piece of garbage. It's shirts like this that dangerously normalize rape culture and sexual assault.

Making a joke out of Donald Trump's sexually predatory ways is precisely what makes young boys think it's OK to "grab them by the pussy."

It's because of enraging, rape culture-perpetuating, bullshit t-shirts like this that are sold for profit by stupid stores that we still have an ongoing sexual assault epidemic on college campuses.

I never liked the store, personally. Even in high school I thought that store reeked of burning plastic and scum, plus I was offended as a teenage punk rocker that they sold FAUX piercings. I had to suffer for my piercing.

People who shopped at Spencer's were posers, in my eyes. And people who by this shirt are worse than posers. They're rape culture perpetuators.