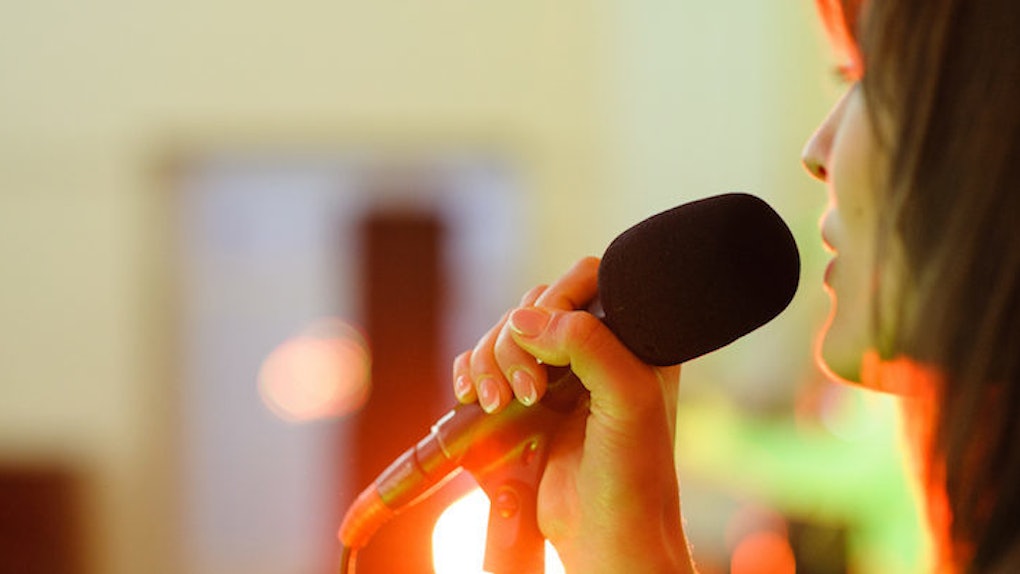 Female Comedians Are Taking Back The Mic With Rape Culture Jokes

Trigger warning: This article or pages it links to contains information about sexual assault and/or violence, which may be triggering to survivors.

Did you know April is Sexual Assault Awareness Month?

I didn't. Well, I didn't until a couple months ago. It's not good, considering I am a sexual assault survivor. It started to really bum me out. Why even have an "awareness" month for something nice gals are not supposed to talk about in public?

One thing you need to know about me before reading any further, in the past I've weirdly open about my rape. Without naming specifics names or dates, I talk about it pretty openly and pretty often. I really only get weird about it when I am around misogynists, old friends who know my attacker (most don't really know what happened and still hang out with him) and my family (talking about anything sex in the presence of your grandma is weird).

My past comfortability came from awesome communities. I've met amazing allies and friends in college at the UPenn Women's Center and from being in a production of "The Vagina Monologues" for six years in a row. I had a strong group of feminists around me in life.

But that all changed once I moved to New York after college. But that's not all. I decided to try to be a stand up comic in New York. My nights now consisted of dank basements and back bars full of men saying things like the pay gap doesn't exist or women aren't funny or — gasp — their own takes on rape jokes.

Maybe I am being a little dramatic. Not every man in comedy is like this. It's actually not even a majority, not by a long shot. But this group of jabronis are super vocal. While not every male comedian makes rape jokes, many do laugh at them.

Every time I heard an anti-women joke it hurt me, but I found myself getting triggered. I was getting nightmares. I was considering quitting comedy altogether. If I do quit, I'd do it because I'm an unfunny hack, not because some guy made me cry so hard I needed to puke.

Fast forward to late March. With creeping dread about Sexual Assault Awareness Month looming, I took to the Internet. I had two options. One, I'd make a Facebook status about how rape jokes aren't funny and we shouldn't be making them, or two, I'd join them.

Could I make rape culture funny? I was willing to try. So, I posted a diatribe. I waited for the feminist backlash. I was waiting for people to tell me "Rape isn't funny," and also possibly "You aren't funny." I did not have a comeback for either statement. But they never came. Everyone was incredibly supportive.

It was in that moment, I realized the meninists had gotten to me. They had been telling me for years that feminists have no sense of humor. They claimed we are PC police and that's why we can't laugh at anything. Turns out, we just didn't find them funny.

I received texts, calls and over 300 likes. Pro-tip: If you really want to feel weird about your assault, post about it on Facebook, because every time you get that like notification it goes from happy to sad real quick. Though I noticed that out of the about 150 male comic friends I have, only about 10 liked this. That should have been my first sign.

My mom is better than your mom. Well when it comes to supporting your weird comedy ideas at least pic.twitter.com/qYhlhamNoH — Rosa Escandon (@therealescandon) April 28, 2016

My mother sent me some rape culture jokes. While she didn't seem to understand that stand-ups don't use other people's jokes, and they seemed to be written in the voice of John Stewart doing a Johnny Carson impression, and it meant a lot.

With a social media promise for the world to not let me back down on, I was ready to write. It turned out to be pretty hard. These weren't just any jokes. These were about so much. They had to be unoffensive while still pushing boundaries. It was a precise balancing act that I wish I could tell you that I fully got down, but that would be a lie.

No, this month wasn't about success in comedy, though I didn't fully realize that at the time. It was a challenge that was bigger than me on a stage. It had arms that reached to me at the grocery store and me at my desk and me trying to not cry at a Father John Misty concert after eating a bunch of Greek cheese.

I am not going to lie to you. I bombed a lot. And for those of you not down with the comedy lingo, bombing is bad (like in a war) not good (like you being one). At one point, I really wanted to stop. I wanted to be done telling rape jokes. I wanted to go back to my usually hard-hitting material on Citi bikes, the band Puddle of Mudd and that one sex scene in "Top Gun."

This lead to excuses. I would do anything to get out of doing comedy, while telling myself it was fine and I had a good reason. The most legit excuse was my sister coming into town, and others ranged from getting drunk at a pasta bar to needing to buy a skirt before doing a podcast.

But then April 16 hit, and I realized avoiding comedy wasn't helping. It was diluting the point of all this. I went to one of my favorite mics in all Brooklyn. It is a small room in the back of bar with a bartender who wears a hat that says "Holy Ship" and periodically forgets I always order the same $4 beer every Wednesday. The mic itself is run by an amazing comedienne and her "comedy husband" is an energetic black middle school teacher. I thought this place was, liberal, diverse and the exact thing I needed.

I was ready to not get a single laugh, and I was OK with that as long as people were listening. Maybe it would touch some cold comedy hearts. I did poorly. Well, maybe that's an understatement. I sucked. But I was OK. Comedy is hard.

But the minute I got off stage, a comedian who I have always considered friendly (who I had fist-bumped minutes before) told a rape joke. The punch line was that after you rape someone, you should have a cigarette. The room erupted in laughter. It was so loud, it rang in me.

I had to leave the room to keep myself from crying. It felt like a slap. It felt like how my rapist pushed me down on his bed, and smoked a spliff after. Later, a male comedian told me not to be hard on the guy. He didn't think it would get that big of a laugh, and he probably actually felt bad that it did.

It didn't help. If he didn't want to make a rape joke after me, he didn't have to. Who cares if he felt bad after? I was already a limp gazelle. I realized they didn't want jokes about rape; they wanted jokes where the punchline was rape. Those were not ones I was going to make.

I resolved then that I had to toughen up. This was just one of numerous occasions. At one show a man heckled me saying things like "assault sexy," and then after the set said sorry he was just trying to "lighten the mood." He thought I would "appreciate" him trying to make it funnier. I thought, isn't it my job to make it funny?

I toughened up. If I learned one thing in this month, it's that women have to be tough. Well, that and women have to stick together. There are hundreds of female comics, writers and comedic actresses in this city. They've supported me, asked if I wanted to go to mics with them and told me their stories.

So many women have in this community have dealt with so much. It's not only assault, but sexism, homophobia, scary situations, molestation and abuse. These women felt comfortable telling me of all this, sometimes as complete strangers. They felt they could talk to me because of this woman I was on stage.