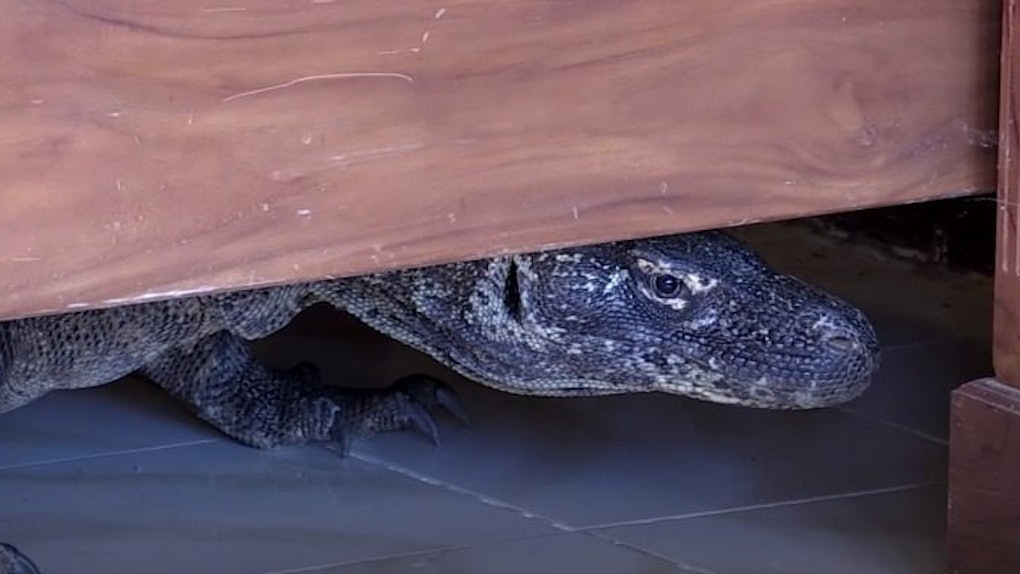 First, we had penguins beating the crap out of each other. Then, we had a baby lizard escaping a pack of snakes.

Now, we have a giant Komodo dragon scaring the crap out of a "Planet Earth" cameraman by hiding in his bathroom.

In case you haven't seen it yet, "Planet Earth 2" is more visually stunning than even the most ardent "Planet Earth" fan could've ever imagined.

Now, you might think being a "Planet Earth" cameraman would be the greatest job ever, but tracking and filming some of the most elusive and dangerous animals on the planet can definitely have its drawbacks.

As this nightmare story goes, cameraman Mark MacEwen had just returned from a long day of filming Komodo dragons in the wild, when, ironically enough, he was greeted by a giant Komodo dragon just chilling in his bathroom.

HOLY CRAP, will you just look at this massive Komodo dragon!

Seriously, if I came home from work and found a giant Godzilla lizard chilling in my apartment, I think I'd drop dead on the spot.

But it gets worse.

Not only did this Komodo dragon scare the crap out of MacEwen, it also took a giant poop on the cameraman's floor while he and others were trying to lure it out of his apartment.

I can't even handle this anymore. My skin is crawling just watching this video, and it's not even that long.

Eventually, MacEwen and some local dragon folks managed to get the Komodo Dragon out of the apartment by using some dead animal carcass as bait.

Thankfully, as you can see in the video above, they got the Komodo dragon out of the apartment.

But still, how is Mark MacEwen supposed to sleep again? Forget sleeping in that apartment -- I mean sleeping in general.

I would never be able to go to the bathroom by myself ever again.

How about that sicko laughing at the end of the video? Like, where they do that at?