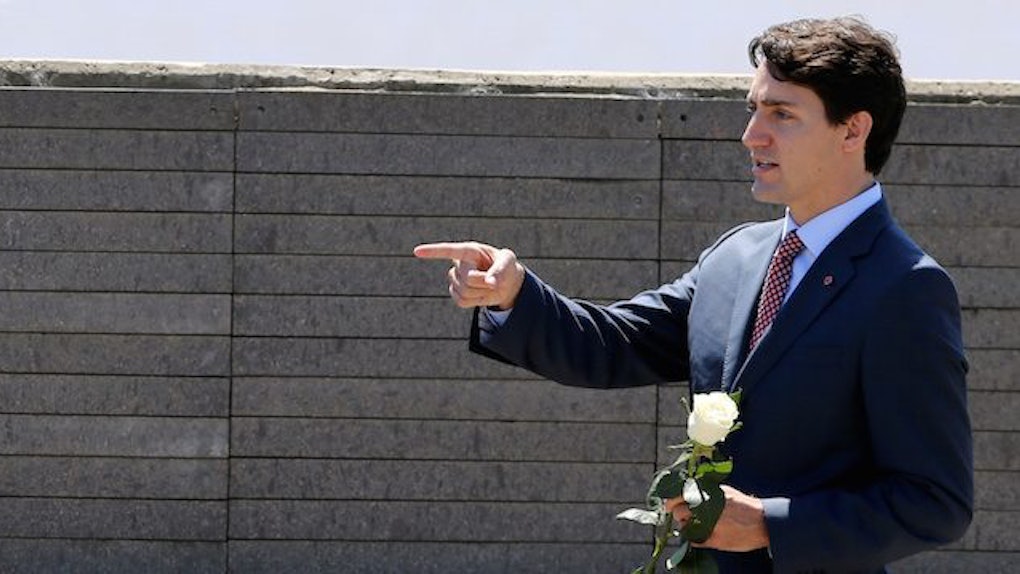 If you couldn't already tell, my thirst for good-looking politicians has no end in sight.

I guess one could say I can't stop, and I won't stop.

And how could I stop, when Justin Trudeau has a flipping doppelgänger?!?

Jesse Klaver, a Dutch politician and Green Party leader, looks more than just a little like the Canadian prime minister.

What if they're actually the same person, and Trudeau is just this superhuman politician daddy?

Or Klaver is just purposely trying to look like Trudeau?

Ouch, except Klaver kiiind of does look like a slightly less attractive version of the prime minister.

Is he really that creepy looking? And how can you tell he's geeky?

Am I weird for kind of liking Klaver's dirtbag-ish appearance? I like bad boys, #sorrynotsorry.

Girl, you right. Trudeau's butt was MADE for tight, business casual slacks.

The 30-year-old Klaver, who scored a big win in yesterday's election in the Netherlands, gets his good looks from his Moroccan father and Indonesian mother.

And in case you were wondering, he's not at all oblivious to our super thirsty observations about his appearance.

In an interview with the National Post, the Dutch politician shrugged off the comparisons between him and 45-year-old Trudeau.

He said with a smile,

I'm very jealous of Trudeau's muscles, because I'm not as muscled as he is.

Fair enough. I definitely appreciate humility in a good-looking man.

Technically speaking, though, Klaver tends to lean further left than his doppelgänger when it comes to politics.

He's cited Bernie Sanders as an inspiration, and he regularly hosts informal meetings with his supporters, who call him the "Jessiah."

Klaver has also been a vocal supporter of programs that combat climate change.

Watch your back, Trudeau. You may not be the only object of my thirst now.

Citations: People Are Going Crazy Over This Politician Who Looks Just Like Justin Trudeau (Refinery29), GreenLeft proves to be big winner in Dutch election (The Guardian), 'I'm not as muscled as he is': Dutch politician brushes off comparisons with PM Justin Trudeau (National Post), For 'Dutch Donald Trump,' A Surge In Popularity Before March Elections (NPR)