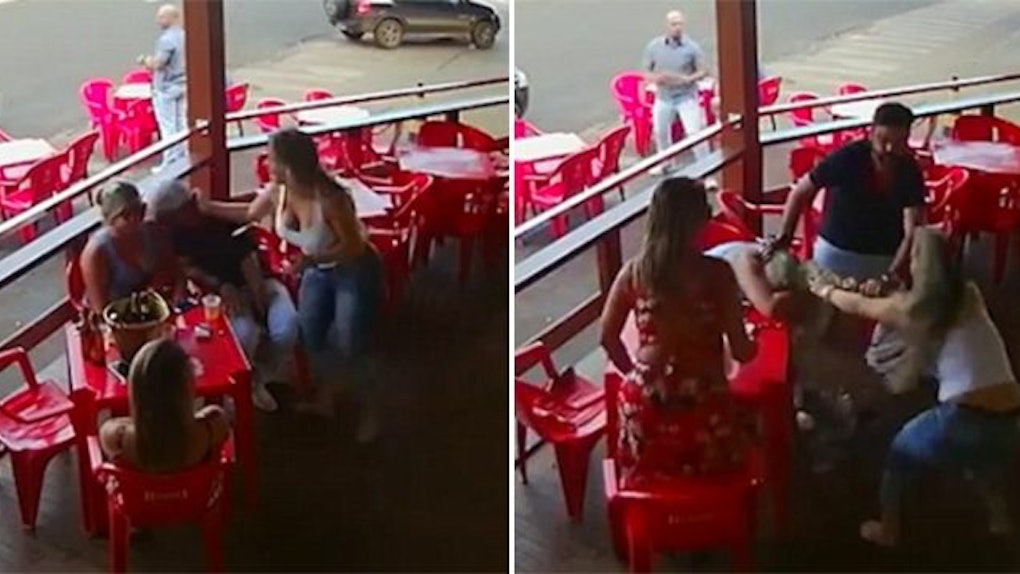 Gentlemen, if you're planning on sneaking around with other women while you're married, make sure not to flaunt your mistresses around in public venues.

Chances are, your beloved wife will find you and, in turn, beat the living shit of you.

That's exactly what a scorned lady did when she caught her husband hanging out at a bar, throwing back some quality brews with two ladies — one of them presumed to be the "other" woman.

Camera footage from a bar in Goias, Brazil, captured the entirety of the explosive incident, and boy, it is a doozy. Who needs pay-per-view when you can just watch fights like this?

First, the man's wife charged into view and approached his table, immediately pulling her hand back before slapping her dear hubby right across the face.

Only a few seconds go by before she switched her attention to the mistress, grabbing on to a large chunk of her hair and ripping the woman right out of her seat.

Clearly, the fight was on, and it was about to get diiiiiirty.

As the wife attempted to rip just about every hair follicle out of the other woman's head, her husband attempted to stop the ongoing battle.

After chucking a plastic chair across the bar's outdoor area, the wife charged forward in a vicious rage, with her attention set directly on her husband.

And what do you know? The wife even had a nice friend as backup to assist her in beating the shit out of him!

The mistress and her friend seemed to have scurried off, and things got even more heated.

The fight even made its way onto the street, where onlookers were forced to step in and break things up. The husband, who is apparently more of a scumbag than we thought he was, proceeded to punch and choke his wife in acts of "self-defense."

Frankly, based on those actions alone, he deserves everything that's coming to him (and more).

After the wife tackled her husband to the concrete and literally ripped her husband's shirt clean off his back, the fight was broken up, and the two began to part ways with a few choice words and hand gestures.

That whole ordeal didn't stop the husband from returning to the scene of the crime to check on his spilled beer, so clearly, he's got his priorities in order.

Let this be a lesson for any men out there who are stupid enough to cheat on their wives.

You will sorely regret it.

Citations: Hell hath no fury...! Wife sparks bar brawl after 'catching her husband with another woman' and attacking the pair of them (MailOnline)