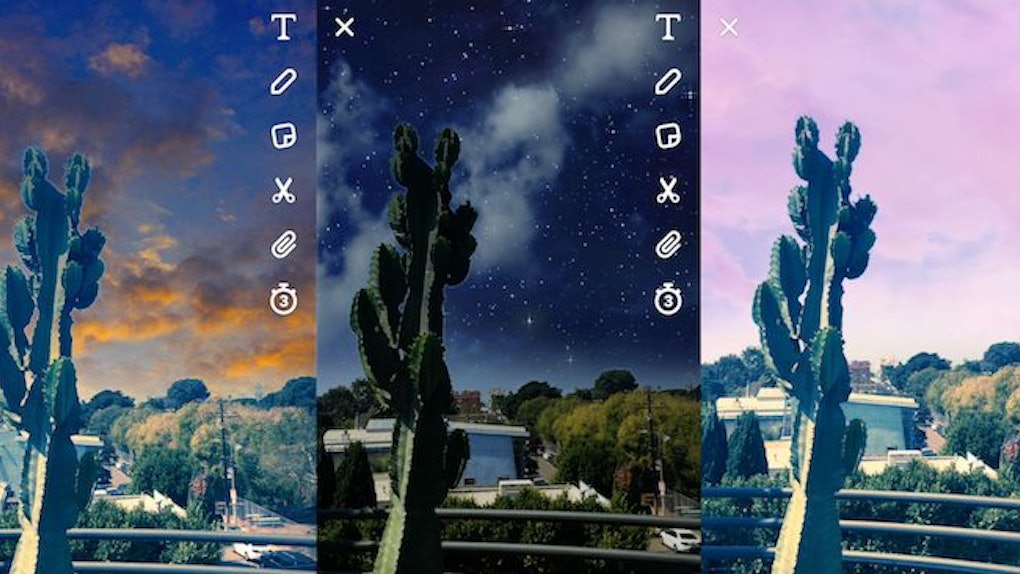 Snapchat is working overtime to try and own the title of the best social media brand. In order to do this, they've incorporated a bunch of different new features to make sure their users stick around for a long time. In their most recent update, Snapchat has added Sky Filters to their already exhaustive collection of filters. If you want to know how to use Sky Filters on Snapchat, I have you covered.

To start using Snapchat's Sky Filters, you must first make sure you have the latest version of Snapchat on your phone. To do this, go to your app store and see if there is an update available for Snapchat. If there is an update available, then just go ahead and download it -- and then that's it, you are one step closer to enjoying Snapchat's Sky Filters.

Once you have downloaded the latest version of Snapchat, hop onto your new and improved app take a picture of the sky. Once you've snapped your scenic picture, swipe through your Filter carousel until you reach the Sky Filter. (Keep in mind the Sky Filters will not be available in the Lenses carousel.) After you've reached the Sky Filter, you'll know -- because your sky probably changed colors or added a few fluffy clouds. According to a Snapchat press release emailed to Elite Daily, the filters will rotate daily with new forecasts. See an example of the Sky Filters below.

Sky Filters are so pretty, aren't they? But this isn't the first time that Snapchat tried pushing the limit. Earlier this year, Snapchat released World Lenses, which was the first time they tried adding AR to their app. They did it by adding hilarious puking rainbows, a winter wonderland, and of course, the very entertaining dancing hot dog filter to Snapchat.

The app did it again this summer by adding 3-D Bitmojis to the app that worked similarly to the other AR filters. To make them work, all you have to do is take similar steps to the Sky Filters and World Lenses. First, you use your rear-facing camera, hold onto the screen, and watch you Bitmoji come to life in different ways. It's clear that Snapchat wants to become a kind of oasis where users can go and escape their reality, if only for a little while.

Snapchat's Sky Filters are already available for iPhone and Android, and these new filters promise to change on the daily basis -- so you'll never get bored using the same filters over and over again. Snapchat is really pulling out all the stops for its sixth birthday (which was celebrated Sept. 26), and it has really been a big year for the popular social media app.

Augmented Reality aside, Snapchat has launched many new features including the ability to create custom filters straight on the app. A custom geofilter will set you back $5.99, but boy is it worth it to be able to see all of your friends using the filter you worked so hard on during brunch. Snapchat has also added the controversial Snap Map feature to their app, which allows users to let their Snap Friends know where they are just by checking the map.

Users can now take longer videos on Snapchat using the Multi-Snap Recording feature. All you have to do is hold on to the record button, and you'll film six 10-second clips that you can edit or delete as you see fit. I will say, Multi-Snap Recording has totally changed the way I use the app.