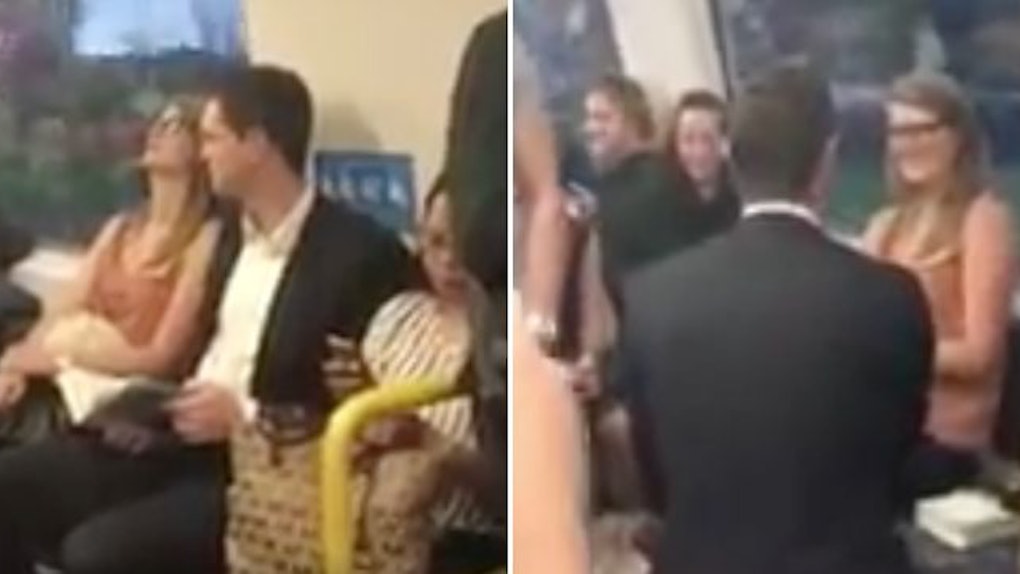 Guy Proposes On Subway During Rush Hour With Driver's Aid

If you're ever looking for obscure marriage proposal ideas, the internet hardly ever disappoints. From dude's popping the question with a box of McNuggets to couples recreating scenes from "Beauty and the Beast," we've seen it all.

I highly doubt we've ever seen this, though. A brave (and likely impatient) guy decided the best setting for his proposal was the crowded subway during his morning commute.

You know that brutal time of day when the last thing you want to do is be trapped in a metal box with a bunch of annoying straphangers? Yeah, that's when he popped the question.

According to Mashable, an Australian man named Ryan Jacka met his now-fiancée Hannah 10 years ago. When planning out the next step in his decade-long relationship, he contacted the Metro subway service in Melbourne for their assistance.

Jacka wanted to remember his special moment with Hannah forever -- so he proposed in a crowded subway car with a little help from the train conductor. I never thought anyone would do something like this, but here we are.

Metro Trains shared the wonderful moment on Twitter for the world to see.

Behold the brave moment Ryan Jacka proposed to his now-fiancée Hannah in a crowded subway car during rush hour.

The anticipation is killing me...

Luckily for him, she said YES!

Metro Trains made sure to capture their graceful exit from the subway car, too. Look at those smiles!

It almost seems like Ryan couldn't wait any longer. He just had to pop the question on a Thursday morning en route to work and clearly, Hannah didn't mind one bit. Now, let's just hope that subway driver was invited to the wedding.

After all, their special moment wouldn't have been possible without him.

I'm just happy the proposal wasn't ruined by a breakdancing subway performer... Oh, does that only happen in NYC? My bad.

Congratulations to Ryan and Hannah!

Citations: I choo choo choose you: Dude proposes on a packed train with some help from driver (Mashable)