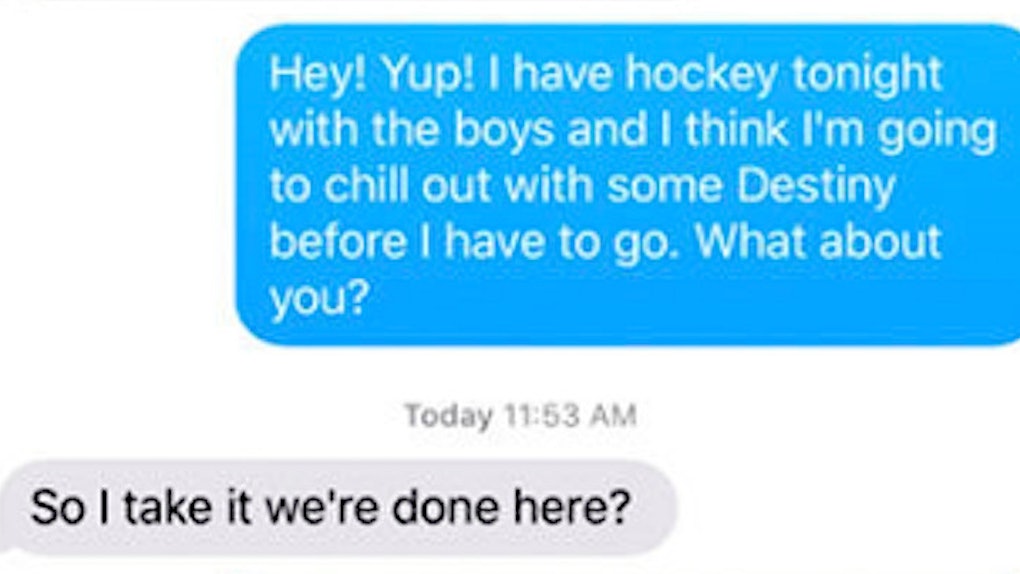 A guy and his girlfriend of one month got into a vicious war over text message when he chose to spend his quality downtime playing video games with his buddies instead of hanging out with her.

As BroBible reports, things started off on a bad note almost immediately for this new couple.

Because this girl has no chill. And flips the F out.

Her overly feisty texts claim that because her new guy prioritizes the online first-person-shooter game "Destiny" over her, their relationship is essentially dunzo.

Asking if the relationship is over just because you two weren't up each other's buttholes one Friday night? That's a sign of a serious stage-five clinger.

All guys in relationships need some moments apart from their ladies. Whether they spend it kickin' back with a beer or playing online games with friends is a personal decision — but an important one, nonetheless.

This guy attempts to keep his cool, insisting that playing the video game is time well spent (and not an activity that's turning his brain to complete mush).

Still, this girl goes so far as to offend his group of pals by calling them nerds.

She does realize she's dating one of these "nerds," right?

Like any rational boyfriend who's had enough (and who probably didn't want to keep his game on pause), he stops answering.

Nope! Instead, she believes harassment is the best way to salvage the relationship and repeatedly sends texts demanding an explanation for his actions.

As any gamer would, this savage guy sends a simple reply with the image of a "Stranger's Rifle" — a primary "Destiny" weapon that's "been exposed to incredible forces... and that parts of it shouldn't yet exist."

That could be interpreted in many ways. My guess? He's providing her with a weapon to fend off new men when's she back perusing the dating scene once again... because they ARE done here.

Of course, a "fuck you" from her end closes out the convo nicely.

I'm glad the boyfriend stuck to his guns and decided to follow his destiny. (See what I did there?)

This girl totally blew it.

Citations: Bro Decides To Hang Out With His Boys And Play Video Games, Girlfriend Of One Month Doesn't Take It Very Well (BroBible)