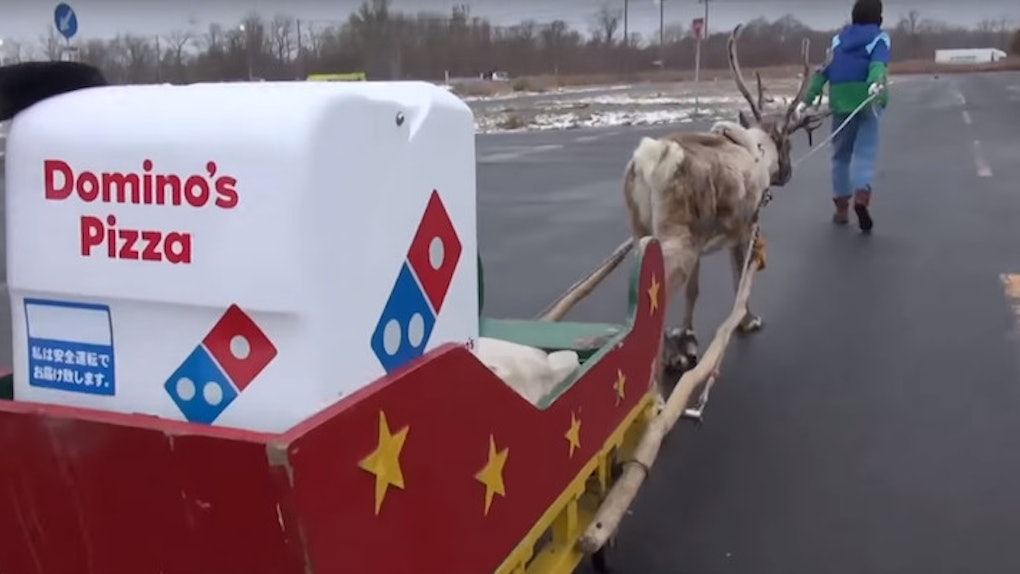 Domino's To Deliver Pizza With Reindeer In Japan

It sounds like an elaborate PR hoax concocted to make us buy more Domino's pizza, but there's an official video and everything, and now I don't know what to believe.

You know what I do believe in, though? Christmas spirit. And my god, this piece of propaganda has more holiday cheer than Santa's unruly beard.

The company is allegedly training reindeer to deliver pizzas in the event of heavy snowfall this winter.

That's right, Domino's in Japan (yeah, I didn't know they had that other their either) has released a YouTube video showing the animals strut through white landscapes with delivery boxes in tow.

It looks like the pizza firm is testing multiple transportation methods, including delivery by sleigh. Pizza delivered by Santa's very own Rudolph — it doesn't get more festive than that, friends.

The video also reveals a GPS-tracking element to the service. It shows a man holding a smartphone with a little reindeer head symbol moving around a course (just like Uber).

Domino's new snow delivery was revealed in what looks like an official statement from Japan.

It claims the service will be up and running by early December and tells fans to stay tuned for more information on its website as and when it's available.

Hmmmm. I'm still not convinced this is actually happening. But here's more evidence of its existence:

As I said, I don't know what to believe. But I know what I WANT to believe, and that's a Christmas with reindeer-enhanced pizza.