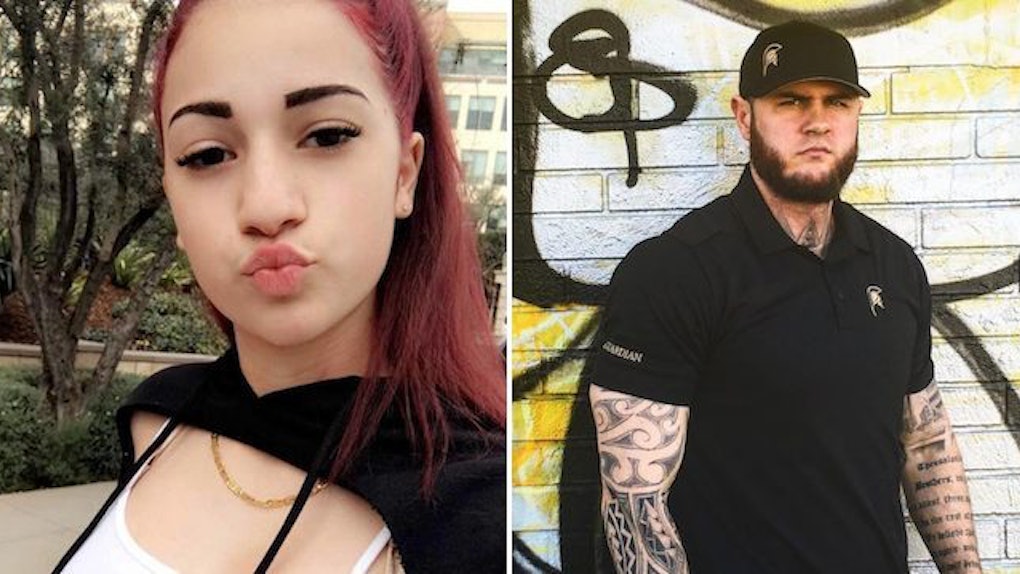 It's safe to say everyone's a little obsessed with the "Cash Me Outside" girl.

Admit it: Whether you consider her a train wreck or not, she's entertaining AF, and she's just getting started. Let's not forget why she's famous, though.

It's all thanks to that wacky appearance on Dr. Phil's show in which she was deemed "ungovernable" and "out of control" by her own mother.

The "Cash Me Outside" girl, whose real name is Danielle Bregoli, instantly struck fame after going viral for her catchphrase, "Cash me outside, how bow dah?"

In plain English, Bregoli is simply summoning someone outside so she can fight them. As you might expect, being as obnoxious as this particular 14-year-old comes with consequences.

People are constantly pushing Danielle Bregoli's buttons when she's out in public since she carries herself the way she does. So, how does she live to see another day despite constantly challenging the world to a street fight?

Her life-saving bodyguards, of course!

Your eyes aren't deceiving you. This girl actually has her very own squad of bodyguards tasked with protecting her at all times. What'd you expect from a CHILD on pace to make $1 million this year?

Plus, she's officially gone Hollywood with her very own reality TV show.

Aside from guarding this loud-mouthed kid's life, one of her main bodyguards named Frank Dellatto has an even better Instagram account than Bregoli does. Hmm, maybe working for a 14-year-old brat isn't so bad after all!

He's one of Danielle "Cash Me Outside" Bregoli's main bodyguards responsible for shielding her from all things harmful.

His motto is simple: "Preparation is key. Think twice, act once."

When he's not watching over Bregoli out in public, he's training hard because you just never know what to expect next.

And when he's not preparing for war with the unexpected, he's probably catching a flight somewhere.

That's because bodyguards are just as busy as celebs are... Notice how I said "celebs?" Just accept it, she's basically a celeb now!

Speaking of celebrities, this isn't the first time Dellatto's had to guard someone famous. Does Chris Brown ring a bell?

He's also worked with Florida-based rapper Kodak Black. You might remember him from the "Everything 1K" video Bregoli starred in.

Rapper Jake Miller's been a client, too.

Not every day is dedicated to a celebrity, though.

Despite how busy you are as a celebrity bodyguard, you always have to make time for your fam.

And you can't forget to spend quality time with your badass car, either.

But then it's right back to the grind!

Maybe being behind the scenes isn't so bad after all.