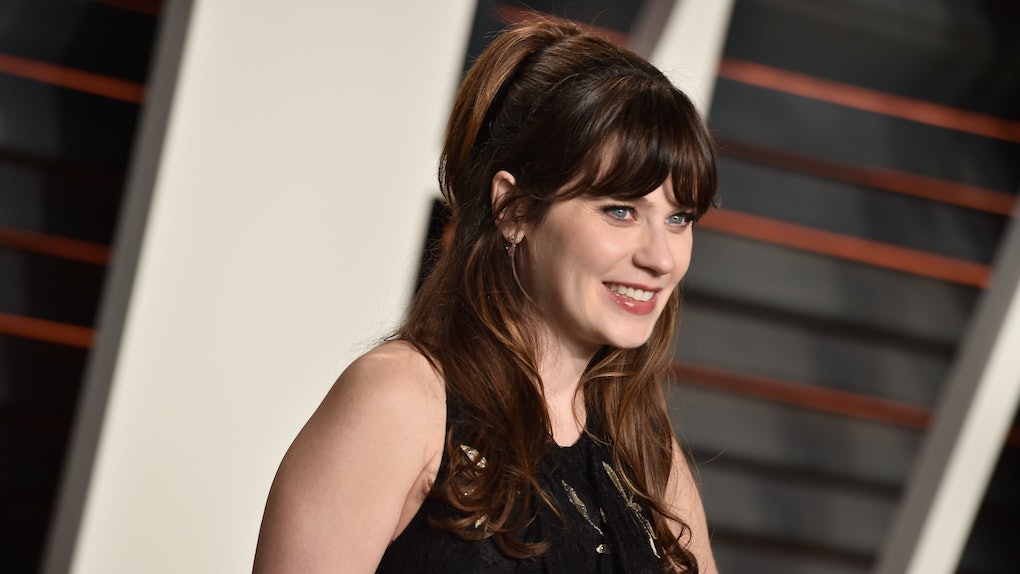 From Elf to New Girl, Zooey Deschanel brings a unique energy to each of her acting roles, and when I hop on the phone with her to chat about her latest project, I quickly learn that that vibrant spirit isn't fictional; it's her true personality. Deschanel is every bit as bubbly IRL as she is on the big screen, and the real proof is in her personal style. Whether she’s being photographed on the red carpet or in the streets, the 39-year-old performer always has a dazzling look to match her personality, which is why Zooey Deschanel’s advice on finding your personal style is definitely worth listening to. Not only does the girl know how to dress, she also knows fully well that there's so much more to style than just the physical clothes you're wearing.

Back in November of 2018, Zooey Deschanel became a brand ambassador for Crocs, and to kick off their partnership, Deschanel is front-running the brand’s 2019 campaign, called “Come As You Are.” According to a press release, the campaign encourages you to not only slip on a pair of Crocs that speak to your unique personality (the brand really does run the gamut when it comes to styles and colors), but to also approach your entire wardrobe with the same mentality: Find pieces that spark joy, and that make you feel good, despite whatever the magazines and runway models might be marketing.

"[Crocs] came to me last summer, and I loved the idea [of a partnership] because it's a brand that's comfortable, and fun, and they are confident in their brand identity, which I love," Deschanel tells me in an exclusive interview with Elite Daily. "I felt like it was fun to pick this brand and marry it with my own sense of style."

On Crocs' official Come As You Are page on its website, the brand sums up the campaign by simply stating, “Exciting things happen when you’re comfortable in your own shoes.” The phrase itself can be interpreted both literally and figuratively, but for Deschanel, the concept behind the Come As You Are initiative is to “be yourself,” choose clothes that “are comfortable,” “make you happy,” and “make you feel and look like you,” in the most authentic way possible.

“If you think about how kids choose their own clothing, and how excited they are to pick out their clothes, and sometimes they pick out things that are crazy but it makes them happy,” she explains, “that's how we should all pick out our clothes.” From Deschanel's perspective, personal style ultimately comes down to picking items and outfits that, put simply, make you happy.

Of course, this might be easier said than done, but if you’re searching for inspiration, look no further than Deschanel herself, because in this context, the actress definitely leads by example. When I ask the mom of two to describe how she expresses herself through her personal style (which, she tells me, is a combination of comfortable and fashionable), Deschanel tells me functionality comes first, and fashion comes at a close second.

“[As a parent], I have to go from a meeting with an important person, to the park, to pick up my kids, and then cook dinner. I have a lot of varying things going on and I need clothes that I can wear to both,” she tells me, noting that she always feels like she’s “walking that line and striking that balance" between functional and fashionable. Over time, Deschanel adds, her style has become more classic, so that she can look nice in a professional setting, and still hop in the sandbox with her 3-year-old daughter, Elsie, and her 1-year-old son, Charlie.

Have you ever heard of dopamine dressing? Per The Guardian, the phenomenon sparked back in 2017, and it spread like wildfire amongst fashionistas and everyday dressers alike. The idea was that a pop of color here and a unique accessory there could boost your spirits from the outside in. From what I can tell, Crocs is trying to spread a similar message: The clothes you wear can make you feel incredible, especially when you’re staying true to styles that are authentic to your unique sense of self.

"I think now we’re in a time where people are so hyper-focused on how they look, and I think it's a bad side effect of social media," Deschanel says. From her point of view, the Come As You Are campaign is all about putting the magnifying glass down when it comes to your personal style. Rather than be critical of yourself, she explains, embrace your individuality. "You're great as you are, and people are all unique," she tells Elite Daily. "We don't all need to look like the same models to be beautiful and be happy and be vibrant."

More like this
Billy Porter Knows He's A Walking Piece Of Art. That's The Point — EXCLUSIVE
By Margaret Blatz
10 Fun Outdoor Spring Fitness Activities You Can Do In Your Own Backyard
By Marisa Casciano
Mark Tuan's Quotes About His Solo Career Tease Endless Potential For The Future – EXCLUSIVE
By Michele Mendez
Stay up to date