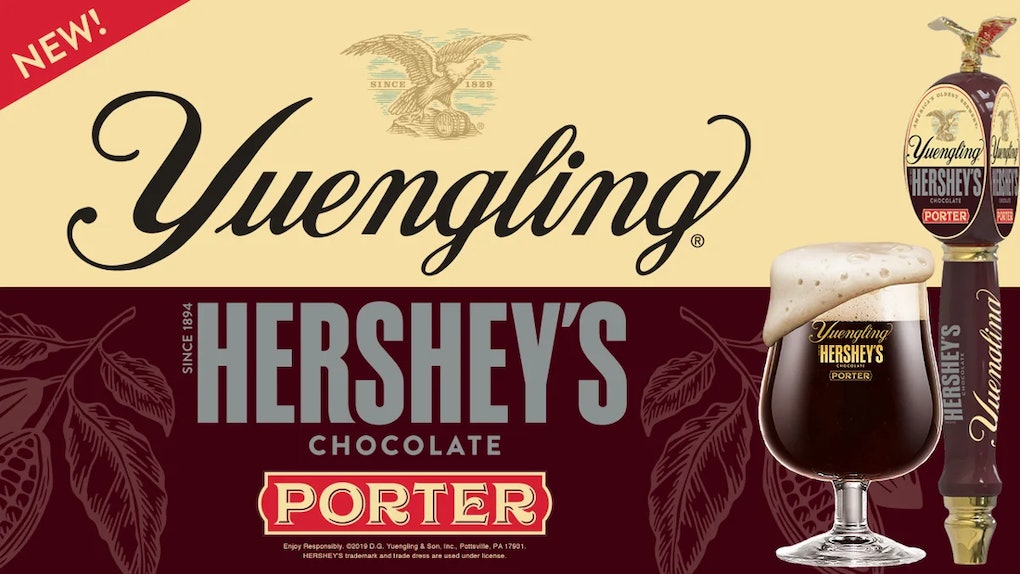 Yuengling Hershey's Chocolate Porter Is The Combo Of Your Dreams

Lately, it seems like companies are into combining two of people's fave things to make a totally new, unique product. If you think about it, that's probably how some of the best combos began. Like chocolate and peanut butter, PB&J, butter and toast — seriously, whatever is your jam, these combinations have to start somewhere. Much to my excitement, a special combo of beer and chocolate was announced on Oct. 1, and it's none other than Yuengling Hershey's Chocolate Porter. Even better, this is the very first time a beer company has collaborated with Hershey's.

This news is something that should be celebrated. And, TBH, that's exactly what this limited-time beer was created for. Yuengling is now celebrating 190 years of brewing, plus the fact that their sixth generation leadership crew is all women. The four Yuengling sisters are def redefining what the industry looks like, just by leading America's Oldest Brewery. I always get inspired when I hear about female-led companies, especially in an industry like brewing, where it has been traditionally a male profession in contemporary history. But this is not the first time women have been coming up as the face of brewing, according to Craft Beer & Brewing.

You'll be pleased to know that this collab also includes The Hershey Company celebrating its own anniversary, too. 2019 is the 125 year mark for Hershey, the famous company known for Hershey's Chocolate, Reese's, Kit Kat, and Jolly Rancher, to name a few.

So, what's the best way to celebrate these huge anniversaries of two large companies? The most obvious answer was to create a celebratory beer — Yuengling Hershey's Chocolate Porter.

If you're wanting to try the Yuengling Hershey's Chocolate Porter, then you're going to have to act quickly. This special brew will be available on draft only in mid-October in specific markets: Pennsylvania, Ohio, Massachusetts, West Virginia, New York, Virginia, Maryland, Connecticut, New Jersey, Rhode Island, Washington D.C., Delaware, Indiana, and Kentucky. The official page on Yuengling's website lists this brew as available through February 2020, but please note that this could change, as it is a while supplies last brew. You can search for the Yuengling Hershey's Chocolate Porter at a location near you via the official website.

The details of this special brew? Yuengling's press release lists the ABV at a 4.7%, while the taste is described as combining "Yuengling’s nearly 200-year old Dark Brewed Porter recipe with the world-famous taste of Hershey’s chocolate." The delicious, iconic taste of Hershey's is blended with "caramel and dark roasted malts for a smooth, rich and delightfully chocolaty finish."

Jennifer Yuengling, the Vice President of Operations and a sixth generation brewer, talked about the collab with Hershey's in the press release. The collaboration's development was nearly a year in the making, but now she and her Yuengling sisters “are excited for the world to indulge in the classic taste of Yuengling Dark Brewed Porter blended with the unmistakable taste of Hershey’s chocolate.”

Reminds me a bit of the beer and coffee sips we've seen cropping up — like the Blue Moon Iced Coffee Blonde — or the skyrocketing popularity of hard coffees and seltzers. Again, combining two of our fave things and making it something even better. I think this one will take the cake, though.

The collab is definitely highly anticipated. I have to say, I love porters; I love chocolate; and I love beer in general, so I'll be one of those people lining up to try the Yuengling Hershey's Chocolate Porter. While I have seen chocolate stouts and porters before, this Yuengling Hershey's Chocolate Porter is taking two beloved companies and making what could be the beer of the year, IMHO.