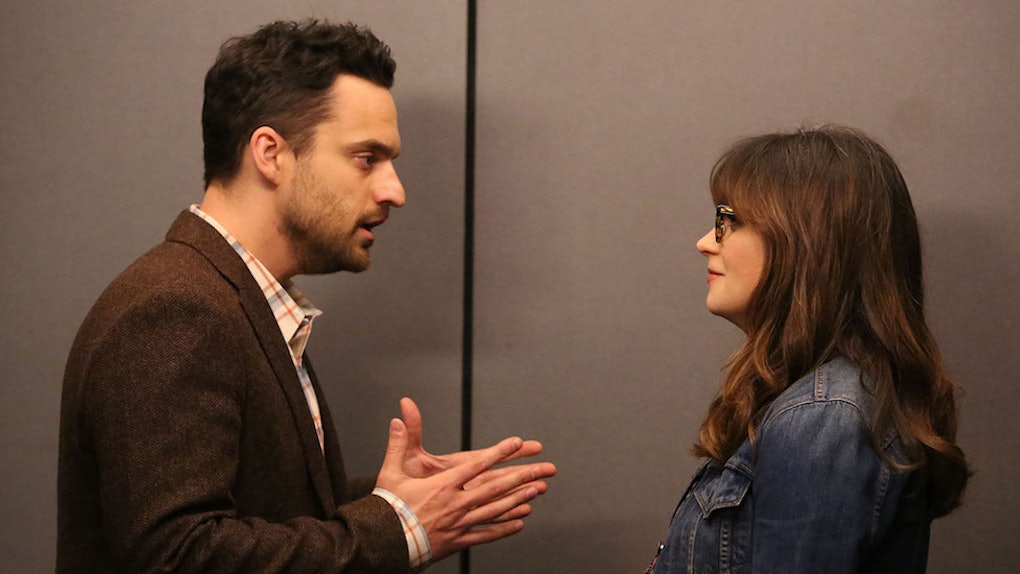 The loft is closing up for good in a little over a month, but first, New Girl fans are getting one last hoorah with Jess, Nick, Schmidt, Cece, Winston, and all the other memorable characters that the sitcom has introduced in the last seven years. The final season is going to look a lot different from the others, though: it only consists of eight episodes rather than the usual 22, and it will take place after a three-year time jump into the future. To be sure you're ready for Season 7, here's your New Girl Season 6 recap to remind you of everything that went down.

To better organize things, let's break down what each of our main characters went through in Season 6, one by one:

At the end of Season 5, Jess' then-boyfriend Sam breaks up with her because he suspects that there is something more than friendship going on between her and Nick. Jess acknowledges that she still has feelings for Nick in Season 6, but since he is still dating Reagan (Megan Fox), she keeps them to herself.

The bulk of the season involves Jess hiding her true feelings from Nick, and insisting to her friends that she is happy to be single. Finally, Nick breaks up with Reagan in the penultimate episode of the season, and Jess is prepared to declare her love for him... but she gets the impression that Nick isn't interest in restarting their relationship at his book reading. As she prepares to move back home to Portland, Jess runs into Nick in the elevator and they kiss as the doors close.

Nick spends most of Season 6 in a distant (both physically and emotionally) relationship with Reagan. He tries to make it work, but eventually realizes that he wants a more emotional connection, and breaks up with Reagan to be with Jess.

Romance aside, Season 6 was also a big one for Nick professionally. He finished his semi-autobiographical novel The Pepperwood Chronicles, and it started developing a fanbase. In the season finale, Nick is even offered a book deal to publish and distribute it.

After getting married in the Season 5 finale, Schmidt and Cece spent Season 6 trying to reconcile their private, married lives with their desire to continue being part of the gang. The couple bought and remodeled their own home, but continued to hang out at the loft very often.

Professionally, Cece kicked off her own modeling agency and Schmidt got a fancy promotion at his office, and that led to us also finding out that Schmidt's first name is Winston. But the big news for Schmidt and Cece came in the season finale, when they find out that Cece is pregnant.

After finally starting a relationship with his police partner Aly, Winston spends Season 6 taking steps to advance their relationship, and he winds up proposing to her. In the season finale, Aly gives Winston his father's phone number, encouraging him to reach out to his father, who walked out on him and his mom when he was a child.

What to expect going into Season 7:

The important thing to remember here is that Season 7 will take place three years after the events of Season 6, so we should expect the storylines that we left off with in the Season 6 finale to be a lot further progressed. For instance, rather than seeing Schmidt and Cece navigate their first pregnancy, they will likely already have a toddler. And rather than seeing Nick and Jess back in a new relationship, it looks like we will be skipping ahead to their engagement. As for Winston and Aly, hopefully they will already be married — a three-year engagement feels pretty long.

More like this
12 'Bridgerton'-Inspired Mother's Day Gifts On Etsy For The True Diamond Of The Season
By Rachel Chapman
5 Facts About Courtney From 'The Circle' Season 2
By Dylan Kickham
Katie Thurston's 'Bachelorette' Season 17: Cast, Premiere Date, & More Info
By Abby Monteil
Stay up to date