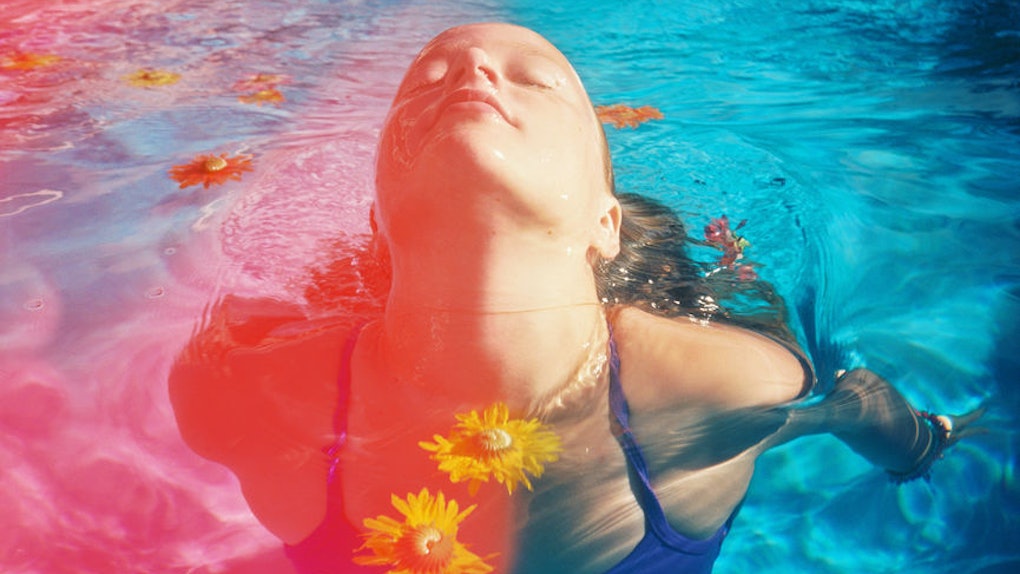 Your August 13, 2018 Weekly Horoscope Is All About Being Good To Yourself, No Matter What

To put it lightly, last week contained enough cosmic chaos to last a lifetime. But then again, do the cosmos ever truly calm down? Whatever you're feeling after being permeated by such life-changing energy, pat yourself on the back for surviving the partial solar eclipse in Leo, the last eclipse of 2018. Transforming our world at the same time as the retrogrades of seven different planets, nothing about last week (or this entire summer, to be truthful) has been easy. Instead of smooth sailing, we're being pushed through changes. Instead of succeeding, we're being held back by retrogrades. However frustrating it all might be, there's a purpose for everything, and luckily, your August 13, 2018, weekly horoscope will finally deliver some relieving news.

For one thing, pesky and irritating Mercury retrograde will finally come to an end on Aug. 19. If you've been struggling to get your words across, having difficulty accomplishing tasks without an overwhelming amount of error, or feeling like the whole universe is against you, Mercury going direct will make all the difference. This is arguably the most stressful retrograde of all the retrogrades that could happen, so having Mercury back where he belongs should alleviate much of the planetary load.

However, we're dealing with an entirely new (and possibly darker) version of Mars retrograde now that Mars has fallen backward into the sign of Capricorn. Being the forward-moving, success-oriented, and determined Earth sign that it is, Mars is bound to make us all more high-maintenance and easily disappointed until it finally begins moving direct on Aug. 27.

With so many retrogrades still going around and eclipse season continuing to send aftershocks of unsettling energy throughout our world, it's imperative that you forgive yourself for your shortcomings and love yourself anyway. None of us are having an easy time right now. The least you can do is give yourself a big hug for shouldering onward anyway.

Are you feeling frustrated by your current path in life? Do you feel like you're not achieving your goals as quickly as you should be? It doesn't help that Mars, your ruling planet, is now spinning through retrograde in your 10th house of career, causing you to feel unmotivated. However, you're about to experience a burst of creativity when Mercury goes direct in your fifth house of fun and pleasure. Let inspiration strike you at the most inconvenient times. Allow it to guide you in the right direction. Most importantly, free yourself from expectations and enjoy the moment.

As the partial solar eclipse continues to send shockwaves into your fourth house of home and family, you're probably entering an unsettling period in life where your usual comforts are harder to find. If the ground has felt unstable beneath you for far too long, things are about to feel steadier this week when Mercury moves direct in your fourth house as well. This will clarify your mental perspective and allow you to tackle issues with greater efficiency. You're currently piecing a new picture of your life together. Allow yourself to have fun in the process.

Your whole world is about to begin making more sense once Mercury, your ruling planet, finally quits its frustrating retrograde and begins moving direct once again. As it made the rounds through your third house of communication, you may have found yourself stuck in strange conversations and saying the wrong thing at the wrong time. This communication is everything to you; there's no doubt it's been rough. However, you're about to discover your talent for words soon enough, so let yourself be unapologetic in your charm.

You've been going through a financial whirlwind lately. Perhaps you've been overspending, not making enough money, or feeling stressed over your sense of security and self. However, the partial solar eclipse is still in the process of sending you clarifying insight on the matter, and when Mercury moves direct in your second house of finance and possessions, you'll begin to feel like you have your money under control once again. Use what you've been learning lately to become a more stable and secure person, in more ways than just financial.

Your solar return has been an incredibly galvanizing experience and you're walking away from it a brand new person. Although you've been under a ton of pressure with the partial solar eclipse and Mercury retrograde all occurring in your first house of the self, the obstacles are bringing you closer to becoming the person you were always meant to be. This is a significant period of growth for you, so embrace it. Now that Mercury will soon be moving direct, you'll be able to make sense of the changes and feel confident in your ability to move forward. How exciting to meet the new you!

Things are about to get a whole lot better this week as soon as Mercury, your ruling planet, officially climbs its way out of retrograde. As it torpedoed through your 12th house of spirituality, you might have felt like your inner world was in disarray, causing you to see things through a warped lens. If you've been lost in a haze of confusion, then Mercury moving direct will dispel much of the chaos from view. You're forging a new connection between your outward persona and your private world, allowing them to work together instead of against each other.

Lately, there's a strong chance you've been having some intense feelings toward your circle of friends and outer community. Perhaps you've been feeling totally in sync with your loved ones. Maybe you've been realizing it's time to part ways with people who no longer serve your best interest. Whatever it is, you're in a period of fierce and powerful self-love with Venus in your first house of the self. Even if you're feeling confused about which social instincts to trust, you're relishing the person that you are, and truth be told, so is everyone else.

Since Mars, your ruling planet, is still continuing its blazing retrograde through your third house of communication, you may have felt that lately, you're not speaking in the most effective manner. Perhaps you've been unknowingly making things worse. Maybe you've been refusing to speak up altogether. However, now that Mercury is finally moving direct in your 10th house of reputation, you're going to be able to better communicate with others in mind. Try concentrating on your own path when irritability strikes. Do your instincts serve your highest self?

Now that Mercury is going direct in your ninth house of expansion and philosophy (your ruling astrological house), you're going to experience the fullest extent of pure, unadulterated adventure. If you've been holding your plans back out of caution, you're on your way to being able to journey near, far, and wide, while learning as much as you possibly can. Embrace your truest Sagittarian self. The cosmos are calling you to lead the way for this exciting new journey we're all embarking on. There's no one more suited for the job than you.

With Mars retrograde still creating drama in your first house of the self, you've recently entered a period of deep introspection. You will likely feel easily frustrated and impatient with the world around you. Why? Because nothing is moving along as quickly as you'd like it to. However, you're not meant to get ahead of yourself here, for there's still work in your past that needs to be done. Instead of feeling disappointed by the lack of accomplishment, take this time to sort through problems that were never truly solved. You're in the process of getting things off your chest so that you can breathe.

With the partial solar eclipse continuing to create disturbances in your seventh house of partnerships, there's a chance that this week is full of relationship changes, which can likely involve drama. Maybe you're grieving over a relationship that has ended in some way. Perhaps you're in the throes of excitement over a promising new relationship you've formed. Whichever it is, you're feeling your heart working harder than any other part of your soul. Now that Mercury will soon move direct in your seventh house of partnerships, the confusion will begin to make sense.

Since Mercury retrograde began spewing chaotic energy into your sixth house of health and productivity, you've likely felt swamped by projects and stressed by lingering messes. However, now that Mercury will soon be moving direct, you'll finally be able to tackle one mess at a time until your world is replenished once again. It's easy to leave important tasks until the last minute, to leave the work behind until it becomes overwhelming. It's by overcoming disorganized habits that you learn how to become a more efficient person altogether. You should feel proud of yourself for trying.